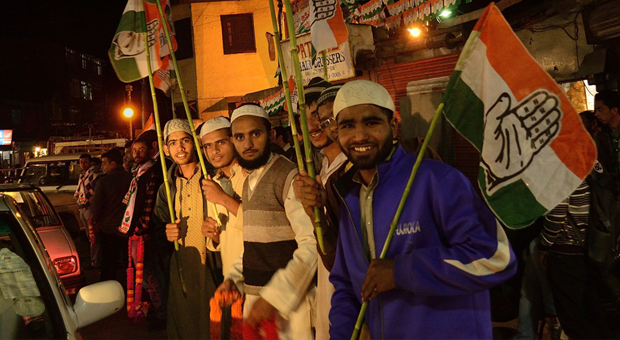 Yesterday, the party office of Congress at Boileaugnaj, a small station in Shimla, witnessed some turbulence as the Congress leader Virbhadra Singh approached Shimla for the party campaign, which he started from Sunni. The traffic jam, fire crackers, slogan shouting and an ignorant crowd headed by a few leaders were the scenes to watch. Flags, posters and garlands could be seen above the crowd. The congested road that crosses through the Boileauganj market got too crowded for a while. The congress leader appeared on the scene accompanied by his son, Suddenly,the party workers transformed into devotees on seeing Raja Ji, like they saw a god at some market. A few Muslims held Congress flags, but mostly they appeared to be either standing at a distance from the crowd in a group. Then a leader said some real heavy words of appreciation for the Congress and Virbhadra Singh. He opposed the allegations put on Raja Ji, cursing the opposition. There are only 2% Muslims in Himachal Pradesh, therefore, the great tool of religion is not much exploited by the political parties. However, the power demonstration strategies and other promotional measures are on full throttle. Here are a few pictures and a video depicting the scene at Boileauganj, which HW captured yesterday evening.

The rallies, party campaigns, public meetings with the representatives of the parties, smiling faces followed by promotional slogan shines on huge billboard all over every city, and you would see leaders approaching the common man with their hands joined in a request to vote for them. Election times are the only times when the common man is considered somewhere. Anyways, the election fever for the assembly elections in Himachal has picked up heat. The election is not just elections in India, it’s a war of the world, created by the political parties. It’s apparent that in Himachal the war of the worlds is to be fought mainly between two giants – Congress and BJP.

The blame game, which these two parties are playing by putting allegations on each other, has always been a great tool to get voters’ attention. The Congress blames BJP for the high rate of ‘Ration’ in the state, while on the other hand BJP is assaulting Congress leader Virbhadra Sing with the charges of violating the provisions of section 118 of the Tenancy and Land Reforms Act and section 6 and 6A of the Ceiling on Land Holdings Act in case of the deal of the 4 hectares of tea estate in Palampur with a trust linked to Prashant Bhushan. One more factor that would be a great concern for a section of the voters is FDI in Retail, which is facing an opposition from BJP government. However, the Congress is supporting it on economical grounds.

Another factor that interferes with the chances of both, Congress and BJP, is the rebellion from Himachal Lokehit Party (HLP) headed by Maheshwar Singh, four times former MP. The alliance of HLP with the CPI and CIM would sure snatch a good enough number of voters from the two main parties. Inner party politics do matter when there is so much uncertainty among both, the public and the parties themselves. Mostly, it happens in the bid to get a ticket by influential people, who are beneficial for the party in any way. There is sometimes a truth behind these revolts deserving candidates are denied a ticket even at the last moment of the nomination period. The state which has a literacy rate of above 90%, the youth voters bank could prove to be a game changer in the elections to be held on 4 November next month. The victories that the left register for two important positions, in Shimla, Mayor and Dy. Mayor, hint at a wind of change.

As the elections are nearing, the supply of alcohol has also seen an increase. Last night, Nalagarh police caught a vehicle carrying 4 crates of Desi Sharab.The sticker of Congress on the vehicle has created a little problem for Raja Ji. Well, that’s the best temptation for the fourth class government employees and below poverty line laborers. A bottle of Desi can change a mind and our politicians knows it well enough.

Near about 45.9 lakh voters will cast their vote on November 4 at 7,253 polling stations across the state. The counting for the same would be done on 20 December. Well, the period in between
the day the election will be held and the day results will be announced, would be interesting enough to witness as the common man would be needed no more, at least before the results are out 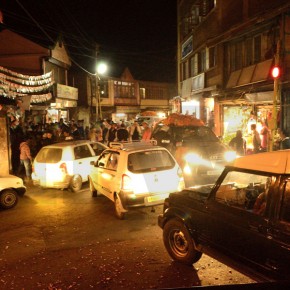 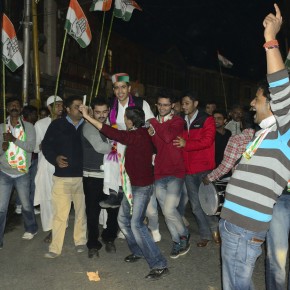 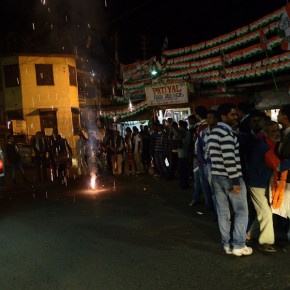 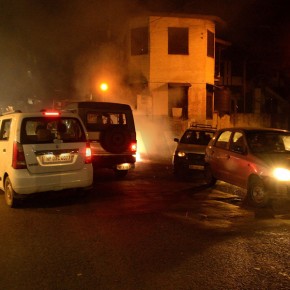 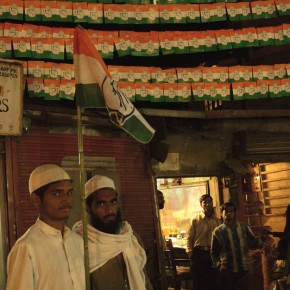 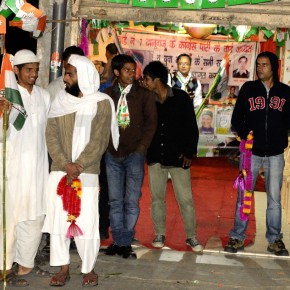 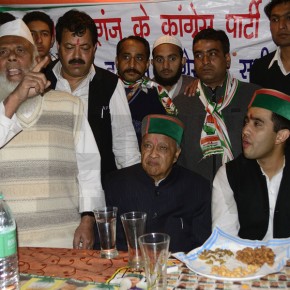 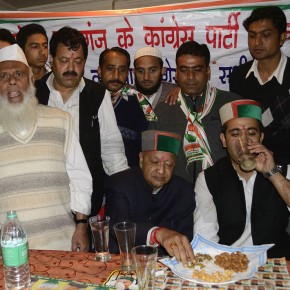 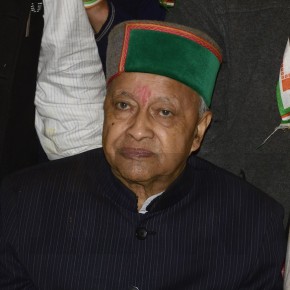 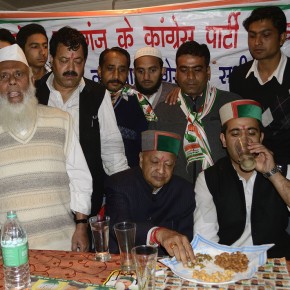 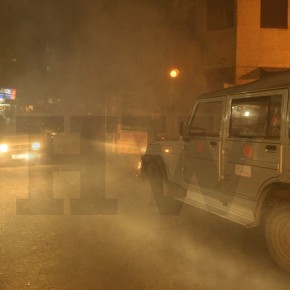 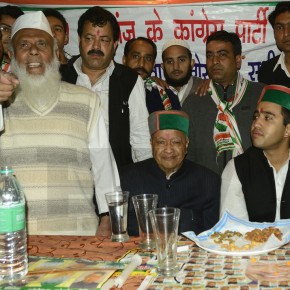 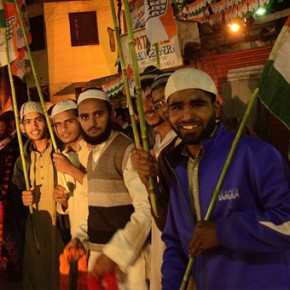 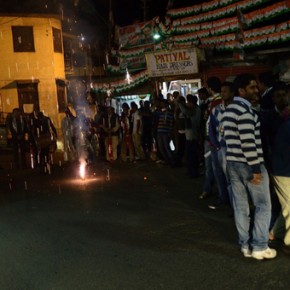 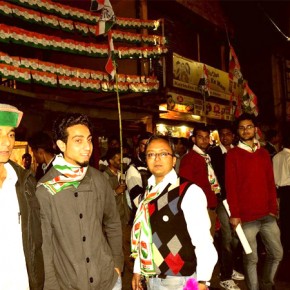 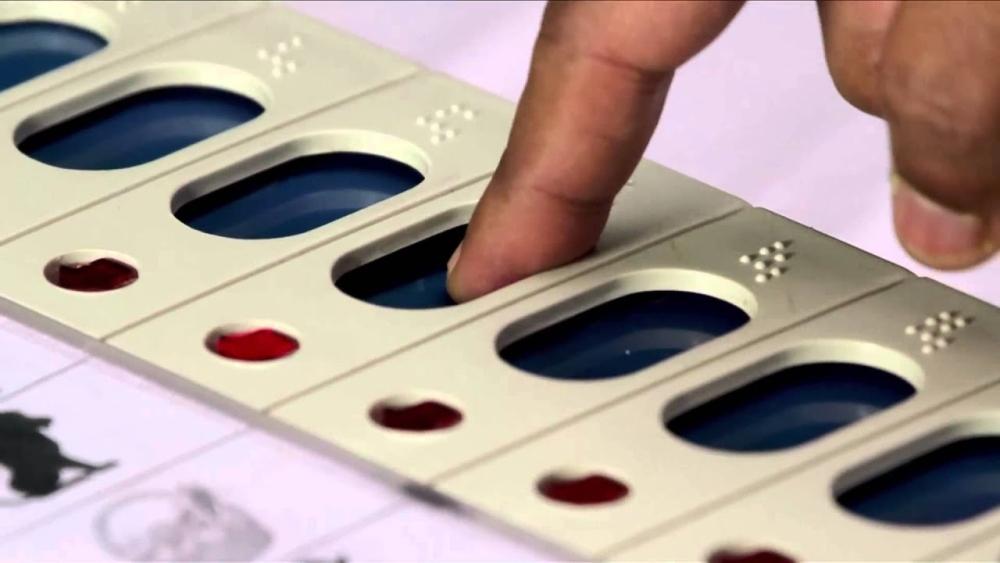 Shimla– Over fifty lakh voters are set to vote in 7730 polling stations in four parliamentary constituencies of Himachal Pradesh in the last phase of the ongoing Lok Sabha election on May 19.

Talking about the poll preparations, Additional Chief Electoral Officer DK Rattan said, “53,30,154 voters will vote in 7730 polling stations on May 19. 373 polling stations are critical, 47 companies of central paramilitary forces have been deployed there.

It’s being ensured that voting takes place peacefully at all polling stations. Rattan said that polling agents have either reached their respective polling stations or are on their way

“Polling party for the remote, tribal polling station at Bara Bhangal in Kangra district was sent on May 15. In Shimla’s Dodra Kawar, teams and material were sent for seven polling stations on May 16,”

“In Lahaul Spiti district, the polling station has been set at an altitude of 15,256 feet at Tashigang. This is the world’s highest polling station,” 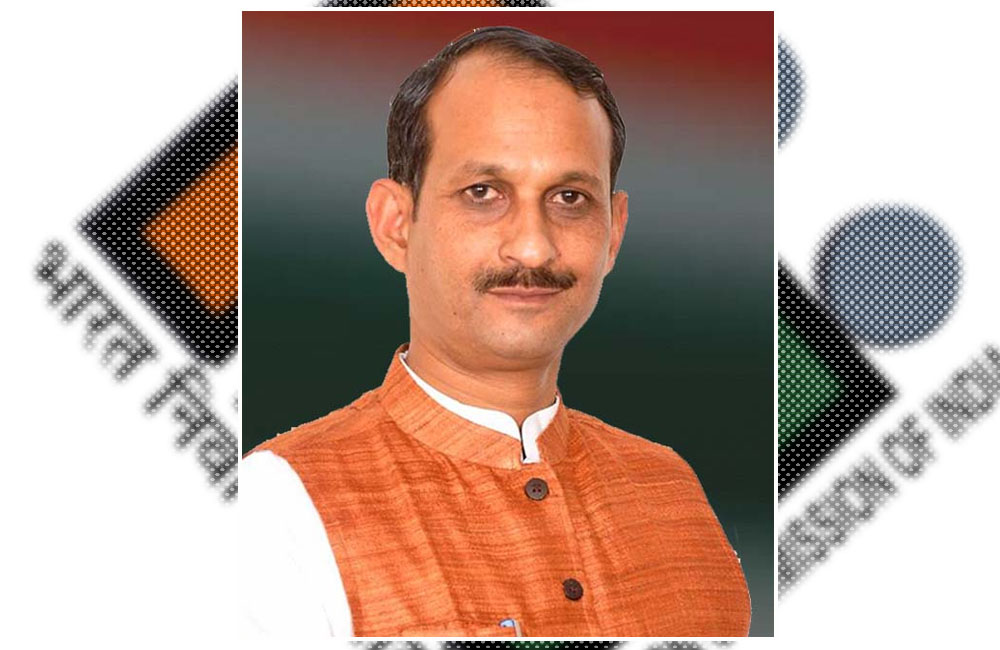 Shimla-The Election Commission of India has barred Himachal Pradesh BJP chief Satpal Singh Satti from campaigning for 48 hours. This prohibition would begin from 10 am tomorrow onwards for two days for violating the Model Code of Conduct.

This makes him the first such leader from Himachal Pradesh who was barred from campaigning for violating MCC.

Satti had used an obscene slur for Congress chief Rahul Gandhi while addressing a public meeting in Shimla constituency’s Ramshahar in Nalagarh sub-division on April 14, 2019.  The EC had taken strict note of it and had issued a notice. Satti had filed a reply justifying himself that he was merely narrating a Facebook comment made by some other person. He also alleged media of presenting edited video clip with manipulations. However, this justification failed to appeal to the EC as the word used by Satti was highly derogatory.

Also, it was alleged that Satti had made objectionable remarks over religious sect Radha Swami, for which he had also apologized.

Here is what Satti Had Said About Rahul Gandhi:

A couple of video clips were shared on social media after someone recorded his address on mobile cameras.

However, Satti is yet to receive a response to the reply he has filed to a second notice served to him by EC for again making objectionable comments about Priyanka Vadra dressing and Rahul Gandhi’s bachelorhood in public meeting in Una.  The second notice was sent on the basis of video footage recorded by EC’s video surveillance team.

Himachal Pradesh Congress had launched a statewide protest against Satti along with submission of a complaint to the EC. An FIR was also lodged against Satti in relation to his derogatory comments.  Effigies were burnt at various places. Youth wing of the State Congress had smeared black paint on the face of Satti in BJP posters in Shimla. Former Chief Minister Virbhadra Singh had gone to the extent of saying that Satti had lost his mental balance.

BJP leaders like Shanta Kumar, however, defended Satti. Shanta said Satti had apologized for his remarks. However, Satti had only apologized to Radha Swami organization. He had refused to apologize to Rahul Gandhi. He maintained that Rahul had also been addressing PM Modi as Chowkidar Chor or Chore while addressing rallies and public meetings. 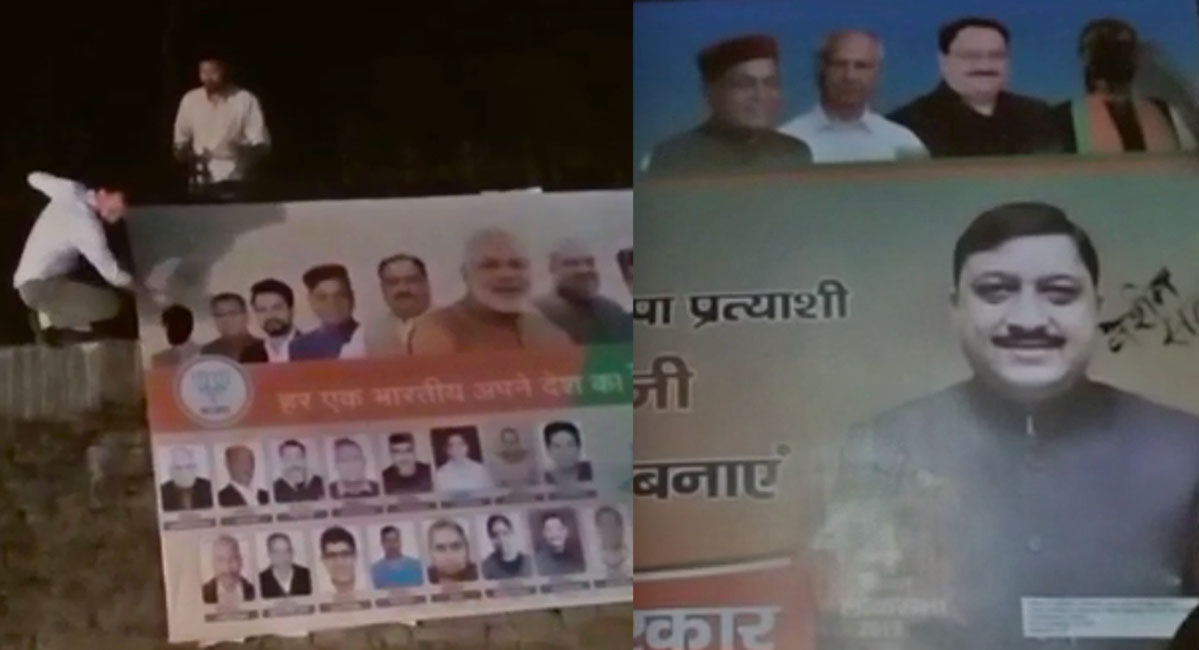 Shimla-Himachal Pradesh Congress Committee (HPCC) has filed a complaint to police for lodging an FIR against Satpal Singh Satti, President of BJP HP, for making derogatory remarks and statements against INC President Rahul Gandhi. Congress said this news was also published by various newspapers on Monday.

HPCC has already made a call for state-wide protest against Satti on April 16.

At the same time, the obscene remarks have angered the State Youth Congress. Workers of Youth Congress were smearing black paint on Satti’s face on BJP poster in Shimla as a protest. Workers can also be seen in the video writing ‘Besharm Satti’ (Shameless) on BJP posters.

The State President of Youth Congress, Manish Thakur, has made a call do the same with BJP chief’s face on posters across the State. All workers across Himachal should boycott and burn effigies of Satti in their respective constituencies, he said.

In its complaint, HPCC said that on April 14, 2019, Satpal Singh Satti was addressing a public meeting organised at Ramshaher of  Nalagarh Vidhan Sabha Assembly in District Solan. During his address, he allegedly passed derogatory remarks against Rahul Gandhiji and former UPA Chairperson Sonia Gandhi. These remarks were highly defamatory and against women’s dignity, Congress said in its complaint. It also alleged that the objectionable remarks used by Satti are also in gross violation of the guidelines laid down by Election Commission of India.

The unparliamentary language used by Satti while delivering the speech in this meeting tarnishes the image of AICC President Rahul Gandhi, the complaint said.

The abusive remarks used against Sonia Gandhi are damaging the public image of a woman, who is given the utmost importance in the Social Indian setup, it said.

These remarks would tarnish the image of Congress Party in India as well as in Himachal, the complaint said.  Congress also complained that Satti has committed a criminal offence by passing derogatory remarks and has also violated the guidelines issued by Election Commission of India for smooth conduction of elections.  Some cuttings from today’s Dallies also attached the complaint.

Satti, as per a PTI report, refused to apologize for the remarks, and said he was merely reading contents of a comment posted by someone on social media.  Instead, he said Rahul Gandhi and Congress leaders should apologise for using ‘chor’ word for PM.

I have narrated an incident while addressing a public meeting in Nalagarh tehsil of Solan district whereby a derogatory remark was made against Rahul in retaliation of using ‘chor’ word for PM in a viral social media message,