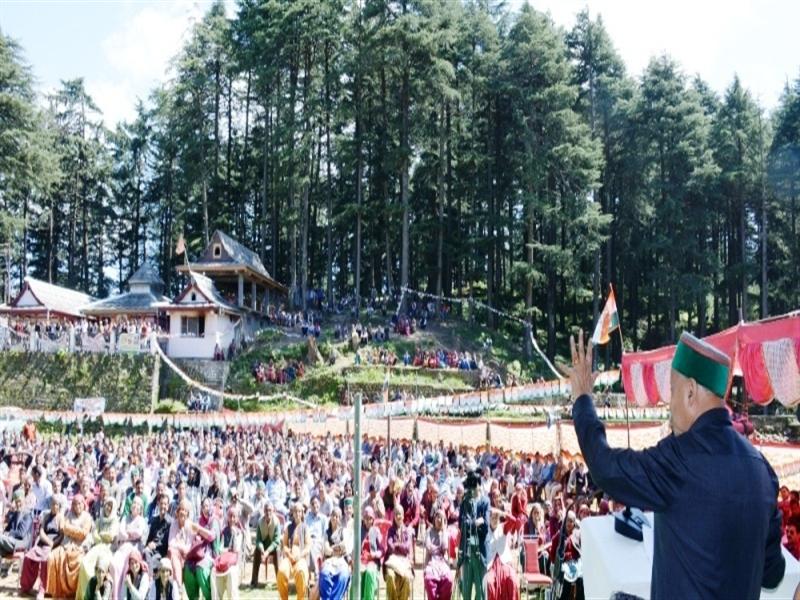 Chief Minister Virbhadra Singh while addressing a public meeting at Nankhari in Shimla district today announced to bring Nankhari under Special Area Development Authority (SADA) to ensure planned development of the area with proper sewerage system and other basic facilities. He said that the Sub divisional Magistrate (SDM) Rampur would be the chairman of the committee and all the designs/maps pertaining to construction would be passed by him. The Chief Minister said that a metalled road would be constructed from Nankhari till the college at a cost of Rs 20 crore and in terrace pattern, so that the coming generations may have better educational facilities near to their homes.

He said that the Government during its present tenure had opened as many as 15 colleges in the far-flung and rural areas of the State and provision for adequate funding for the same had been also made. He said that it was the need of the hour to provide quality education to the girl child in the State and the Government was endeavouring to open more educational Institutions in the rural and far flung areas.

The Chief Minister said that if a girl child was educated; the whole society was educated adding that the Government would ensure that colleges have enough teaching staff. He expressed happiness that as many as 600 children were studying in the College in the remote Shillai area and out of the total children, 400 were girls. “ I feel elated to see the Girls coming forward in all fields and taking keen interest in pursuing higher education, which otherwise would have been a distant dream for them, if the present government had not opened educational institutions in tribal and far flung areas”, he said.

He said that all functional posts of the teachers would be filled up and even the school management committees were empowered to keep teachers where necessary.

Virbhadra Singh said that as many as 13 senior secondary schools were functioning in and around Nankhari, which boasts of the achievements of the Government in strengthening the education sector. “ Sab Pade, Sab Badein”, this is the motto of our Government and people should come forward to educate the girl child, so as to educate the society as a whole, said the Chief Minister. He said that the admissions to colleges in the urban areas would now be limited so that the children may study in colleges opened near to their homes and not rush to towns and cities spending a lot.

Raising concern over the encroachments on government land in few areas in the State, the Chief Minister cautioned that the forest Land should not be misutilized for personal benefits.Chief Parliamentary Secretary, Nand Lal while speaking on the occasion said that Tikkar-Kahamadi road work had been awarded and the work on it will soon commence. He thanked the CM for appointing Block Medical Officer in Nankhari and said that the irrigational facilities provided in the area were sufficient enough. He thanked the Chief Minister for giving consent for a proper place for a market at Nankhari.

Darshan Singh Thakur, former Block President Congress thanked the Chief Minister for the development works being carried out in the area.