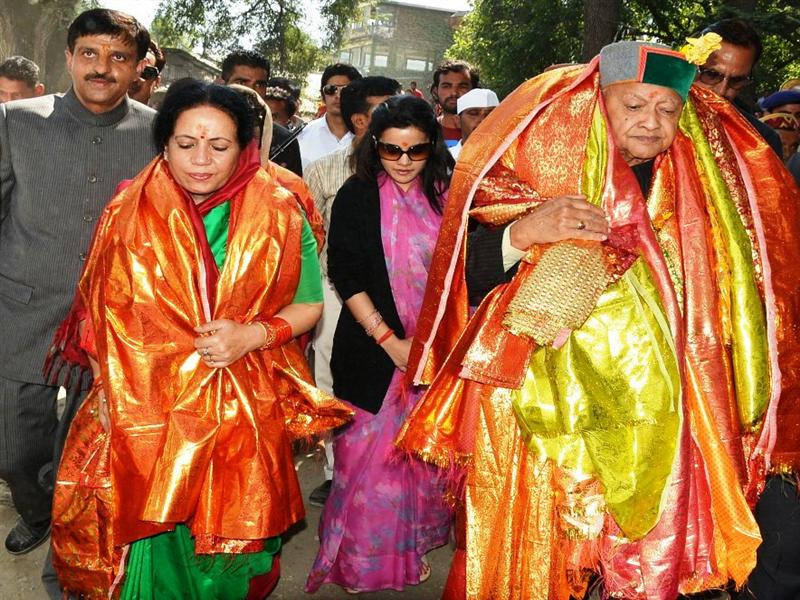 On his two-day visit to Kullu on the occasion of International Dussehra Festival, Chief Minister Virbhadra Singh started the largest Asia Folk Dance performed by as many as 8760 local women of the district at Rath Ground in Kullu today. The impressive dance performance was first of its kind in the State with women in traditional attires danced to the tune of folk music songs.

The theme of the festivity, ‘Save Girl Child’ was mainly based on spreading the awareness about the importance of Girl Child in the Society. Speaking on the occasion at Kala-Kendra and afterwards on the sidelines of the function, the Chief Minister said that this was a remarkable performance by the women and definitely a strong message to those who commit the sin of killing the unborn girl fetus in the womb.

The Chief Minister administered the pledge of saving the girl child to thousands of women present on the occasion and said that the “discrimination with the girl child will not be tolerated and we will work together for eradicating the evil practice of child infanticide”.

We should start a crusade to save the girl child and unless drastic measures are taken, as to give them better education, to create skills and capability amongst them for enabling them to stand on their own feet and care for themselves, it will be difficult for any Nation to prosper, said the Chief Minister.

He said the girl child, which was a beautiful creation, was one of the gravest concerns facing humanity, with a volley of summits, conferences and events held for the cause, with topmost world leaders at the helm. He said that efforts should be to make it a Global Campaign, particularly in the developing Nations and South East Asian Countries for saving the Girl Child. Selective sex abortions should be discouraged and the private clinics involved in detection of sex should be dealt with as per the laid down legal norms.

The Chief Minister said no Society can prosper without respecting the women folk, who were the strength of the society, adding that women was a friend, a mother, a sister who performs multifarious roles in society. “If due respect is given to women and if equipped with proper resources, they have the power to change the destiny of civilizations” he said.

The Chief Minster said that the need of the hour was to empower the women folk for a better tomorrow and there were millions of such women who were serving the Nations as equal to their men counterparts. The Rally to save the Girl Child and the Dance performance here was quite superb but the message of Saving the Girl Child, should not merely be symbolic, he said.He lauded the efforts of the local administration which was a appreciable step for preservation of the culture and custom of the Pradesh and the culture, customs and traditions of Himachal Pradesh were known world-wide.

The Chief Minister also honoured Kavita Thakur, from Jagatsukh Manali who received Gold Medal being a team member of the Kabaddi team in Asian Games at Incheon in South Korea and lauded her feat.

Rakesh Kanwar, Deputy Commisioner, Kullu welcomed the Chief Minister and detailed about the biggest ever event which is to be recorded in the Limca Book of records. He said that on the invitation of the district administration, the women and even girls from the entire Kullu district voluntarily agreed to participate in the Dance Performance.

Earlier, the Chief Minister and former MP Smt Pratibha Singh were given a warm welcome on reaching Kullu on the eve of Dussehra.

Later, the Chief Minister inaugurated the Nature Park at Mohal constructed at a cost of Rs. 50 lakh.