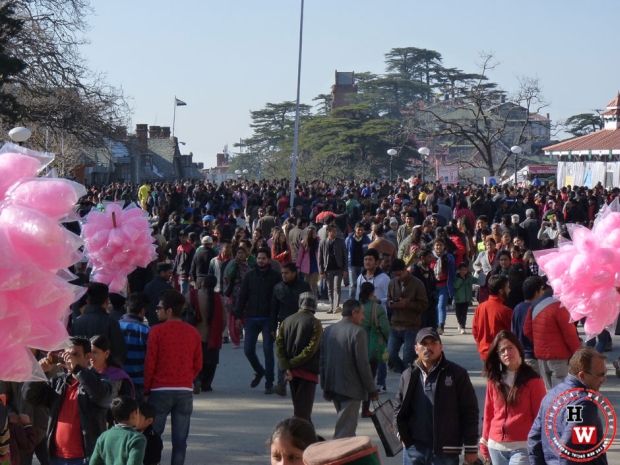 SHIMLA-If the plains of northern India are shivering and dense fog is spoiling New Year celebrations, head for the hills of Himachal Pradesh. There will be a lot of relief as the long sunny days have rendered the hills unusually warm.

Members of the hospitality industry say it`s the prevailing bright sunny days that are attracting tourists, mainly from the plains, to the hills. They estimate that the tourist footfall is likely to cross the 50,000-mark across the state to ring in the New Year.

“As the sun is eluding the residents in the plains due to dense fog, a bright morning in the hills is an added attraction for tourists,” Himachal Pradesh Tourism Development Corp (HPTDC) general manager Yogesh Behl said.

Shimla`s meteorological director Manmohan Singh said the popular tourist destinations Shimla, Kasauli, Narkanda, Dharamsala, Palampur, Manali, Chamba and Dalhousie have been experiencing sunny days for over a week and this would continue till Jan 2.

Previous Story:Sunny day mocks at Shimla on Christmas 2014 – In Pictures

He said the days were quite pleasant in the hills compared to the plains but the night temperature has been quite low in most tourist spots like Shimla, Narkanda, Kasauli, Manali, Dalhousie and Chamba.

General manager D.P. Bhatia of Clarke`s Hotel here said: “We are advising the tourists to travel to Kufri and Narkanda if they want to enjoy snowy landscape.”

Narkanda, the heart of the apple belt some 65 km from Shimla, has good accumulation of snow. Skiing is an added attraction there.

Shimla – known for the imperial grandeur of buildings that were once institutions of power when it was the summer capital of British India – saw the season`s first snowfall Dec 13-14. It has snowy landscape in some patches, mostly in the Mount Jakhu hills, the highest peak of the town.

Manali in Kullu district, about 250 km from here, which remained out of bounds for almost a week after the Dec 13 snowfall, is again a magnet for holidaymakers.

“The current trend of tourist arrivals indicate that most hotels will again be packed to capacity before the next year dawns,” Manali-based prominent travel agent M.C. Thakur said.

Gulaba and Solang slopes, near Manali, still have good snow accumulation and the tourists are heading there to enjoy ski or ride sledges and snow scooters, he said.

Behl said most HPTDC hotels in Shimla and nearby destinations were packed to capacity.

“However, in Manali the occupancy rate is 60-70 percent. But we expect 100 percent on the last day.”

The mountain peaks viewed from Shimla`s historic Ridge have been wrapped in a thick white blanket of snow.

Deepika Khanna, a senior executive with a Delhi-based multinational, said: “We are really enjoying the sun. The lack of snow in Shimla has not disappointed us at all.”

In the state capital, located at a height of 7,000 feet above sea level, it`s the ice that is an attraction for the tourists.

Asia`s oldest skating clay surface rink has been holding regular skating sessions since Dec 26 due to the natural formation of a thick coating of ice owing to the freezing winter.

Himachal`s economy is highly dependent on tourism, besides hydroelectric power and horticulture.