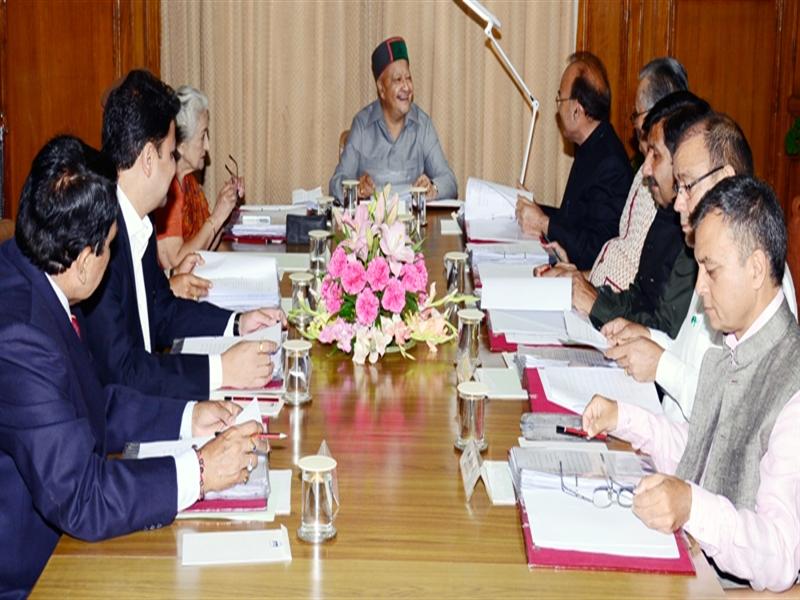 In order to provide industrial friendly environment for attracting new investments in the State, the Cabinet decided to reduce electricity duty so as to facilitate the new industrial units fulfilling the announcement made by the Chief Minister in his budget speech.

It also approved amendments in H.P. Village Common Lands Vesting and Utilization Act, 1974 pertaining to conferment of proprietary rights to Chakotadars. A Scheme for Grant of Proprietary Rights over the land leased/allotted by Panchayats under the Punjab Common Land (Regulation Act), 1962 would be made effective after completing all formalities.

The cabinet gave approval for opening of Sub-Divisional Police Office at Jawalamukhi in District Kangra and at Paddar in district Mandi.

The Cabinet decided to cancel the allotment of Anni-II (1.50MW) and Anni-III(1.50MW) hydro- electric projects as the promoters failed to execute the projects in time, causing revenue loss to the Government. The projects were allotted to M/s ABB Power Private Ltd in the year 2000.

It was decided to permit transfer of Baspa-II and Karchham Wangtoo hydro-electric power plants from Jaiprakash Power Ventures Limited (JPVL) to its subsidiary Himachal Baspa Power company Limited (HBPCL) and sale of securities of HBPCL to JSW Energy Limited.

The Cabinet also decided to cancel as many as 20 projects and forfeiting their security for non-seriousness in carrying out the work on such projects.

Approval was given to start B.Tech in Electrical Engineering with intake capacity of 60 seats in Rajiv Gandhi Government Engineering College , Kangra at Nagrota Bagwan along with creation and filling up of various posts.

Approval was also given by the Cabinet to declare Government Engineering College Kotla at Jeori in Shimla district as a constituent college of Himachal Technical University, Hamirpur on the same analogy.

The Cabinet decided to transfer government land in relaxation of Nautor Rules as a special case to as many as 36 effected persons of village Shmah, Paonta Sahib, whose houses were damaged and their fields destroyed due to heavy rains in the year 2013.

The decision was taken that the apple procured under Market Intervention Scheme (MIS) would be disposed of as per past practice and the decision for arrangement of sale of MIS apples near the procurement centres was withdrawn.

The Cabinet approved for upgradtion of three posts of Principal Secretaries to Additional Chief Secretary in the IAS cadre.

It decided for selection and imparting training to 242 candidates in order to fill up vacant posts of Patwaris in Settlement wing of Revenue department besides engaging retired Patwari/Kanungos on contract basis in the interim period to tide over the vacancy position till the availability of trained Patwari. Further, it also approved creation and filling of multipurpose workers in each Patwar circle of each district on part time basis.

The Cabinet gave approval to fill up 100 vacant posts of Ayurvedic Pharmacists on contract basis in Ayurveda Department, besides filling up three posts of Professors in Ayurveda College Paprola.

It gave nod to fill up 200 posts of Junior Office Assistant (IT) on contract basis in Higher Education Department, besides creation of posts for smooth functioning of State Project Directorate of RUSA.

Approval was accorded to fill up 35 posts of Clerks on regular basis from Limited Direct Recruitment (LDR) quota as well as 70 posts of Junior Office Assistant (IT) on contract basis in IPH Department.

The decision was taken fill up the post of PET and DPE in Plus Two School for Institute for children with Special Abilitiesat (Boys) at Dhalli in Shimla.

The Cabinet decided to create a new IPH Division at Nagrota Bagwan as well as a new IPH Sub Division at Tanda in district Kangra along with creation of different posts of categories.

It was decided to fill up various 54 posts for smooth functional of Panchayati Raj Department through direct recruitment.

Approval was accorded by the Cabinet to exempt Magical and Circus shows from paying entertainment duty for a period of ten years w.e.f. April, 2015 under Section 12(3) of the Entertainment Duty Act, 1968.

It approved the proposal to reduced rate of VAT from 13.75% to 5% in respect of Bitumen and Coal-tar of all kinds.

The Cabinet decided to enhance the financial assistance to the Second World War soldiers and their widows from Rs. 2000/- to Rs. 3000/- per month.

The Decision was taken to enhance the compensation, relief and rehabilitation grants to the members of Scheduled Castes and Scheduled Tribes who are victims of atrocities under SC/ST (Prevention of Atrocities) Act, 1989.

It was decided to issue UWIN smart cards (Social Security Cards) to un-organized workers including those who are presently enrolled under RSBY as per instructions of Government of India under Shram Shakti Pehchaan campaign for registration of unorganized workers.