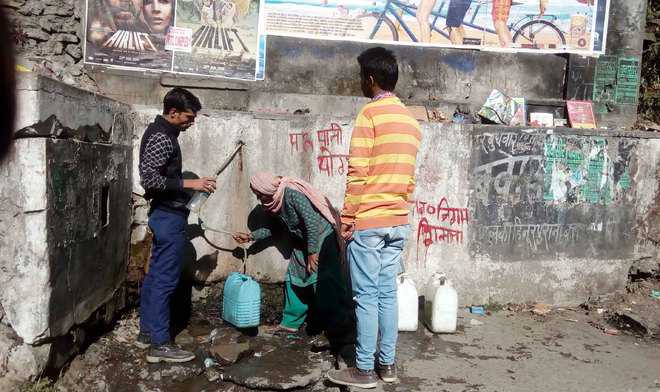 His residence is in Chhota Shimla, the place which gets water supply from the Ashwani Khud.

SHIMLA- A 41-year-old man reportedly died of jaundice at the PGI last night. The deceased, Jagdish Vats, a High Court lawyer, was on ventilator after he slipped into a coma. This is the fourth jaundice death. The third victim was 25-year-old Supriya, mother of a six-day-old baby. She died at the Indira Gandhi Medical College (IGMC).

Doctors at the Indira Gandhi Medical College said Vats was suffering from hepatitis A and E. After his condition deteriorated, he was referred to the PGI.

His residence is in Chhota Shimla, the place which gets water supply from the Ashwani Khud.

The presence of hepatitis E virus has been detected in the water samples collected from private water tanks in Chhota Shimla.

State surveillance officer Dr Rakesh Bharwaj said the cause of Jagdish’s death had not been confirmed so far. His relatives said his condition was critical.

Solan: As many as 12 cases of jaundice were detected in Solan today taking the total number of such cases to 500 in the last one-and-a-half months.

Medical Officer Health Dr NK Gupta confirmed that 12 cases had been detected. He said they have written to the National Virology Laboratory at Pune to test the water samples from the Ashwani Khud scheme again.

Hepatitis-E virus had been detected both in the water supply scheme as well as the sewage by the lab earlier rendering the water unfit for consumption, he said.

Hyper-chlorination of water had been undertaken along with other measures to rid the water of Hepatitis-E virus. The officials now want to verify if these measures had yielded any result.

Dr Gupta added that the water samples could be sent through a courier.

Given the number of cases which were surfacing in and around the town for the last over a month, experts said three-four cases could emerge on a routine basis as the disease had become endemic in the area.

The officials of the Irrigation and Public Health Department have, meanwhile, disconnected 25 water connections at Saproon where the sewage pipes were being emptied out openly intoa nullah.

Eighteen fresh jaundice cases were reported from the city on Friday, taking the total number to 1,531. Three deaths have been reported since December while the cause of the fourth death has not been confirmed,

Jaundice patients alleged that the state government was insensitive and had failed to check the contamination in the Ashwani Khud.

I was shocked to read the statement of the Chief Minister Virbhadra Singh that the jaundice outbreak was being exaggerated by the media,

said Brig Daleep S Chhajta (retd), who lives in New Shimla. He had been in hospital for five days.