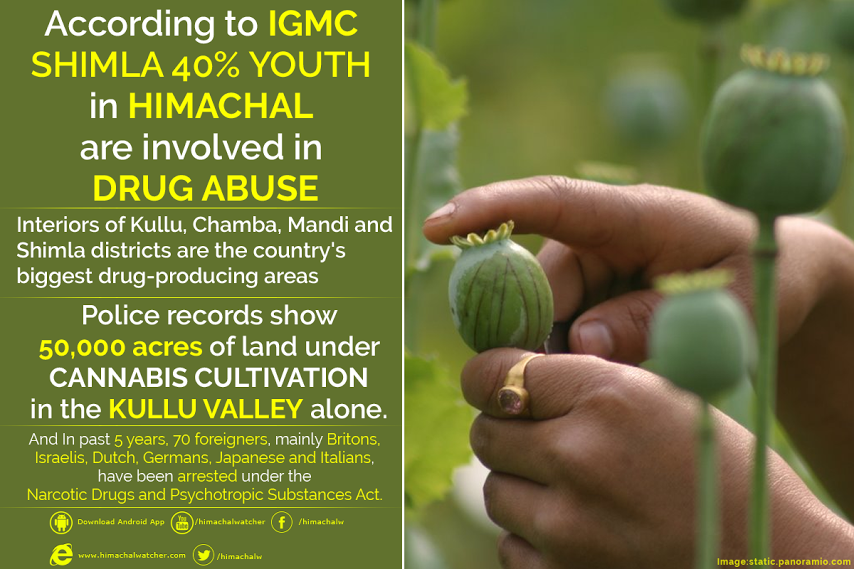 The menace has attained alarming proportions and has turned into a matter of concern not just for the state government but for the courts too.

The state high court is not only pulling up government functionaries on each and every day for apparent lapses in dealing with this growing threat, but virtually rapped them on their knuckles about the steps they have to initiate to counter it.

Quoting a study by the Indira Gandhi Medical College and Hospital, a recent judgment by a bench headed by Justice Rajiv Sharma observed 40 per cent youth in the state are involved in drug abuse.

Our neighbouring state (Punjab) is badly affected by drugs and in our state too its menace is a serious challenge,

Whether it’s Malana (in Kullu Valley) or any remote area that is known for growing opium or cannabis, the government is currently destroying their cultivation,

Police officials said that the inaccessible valleys and lofty mountains in the western Himalayas are areas for cultivation of cannabis and opium. They are the country’s biggest drug-producing areas with a considerable quantity finding its way to Europe. 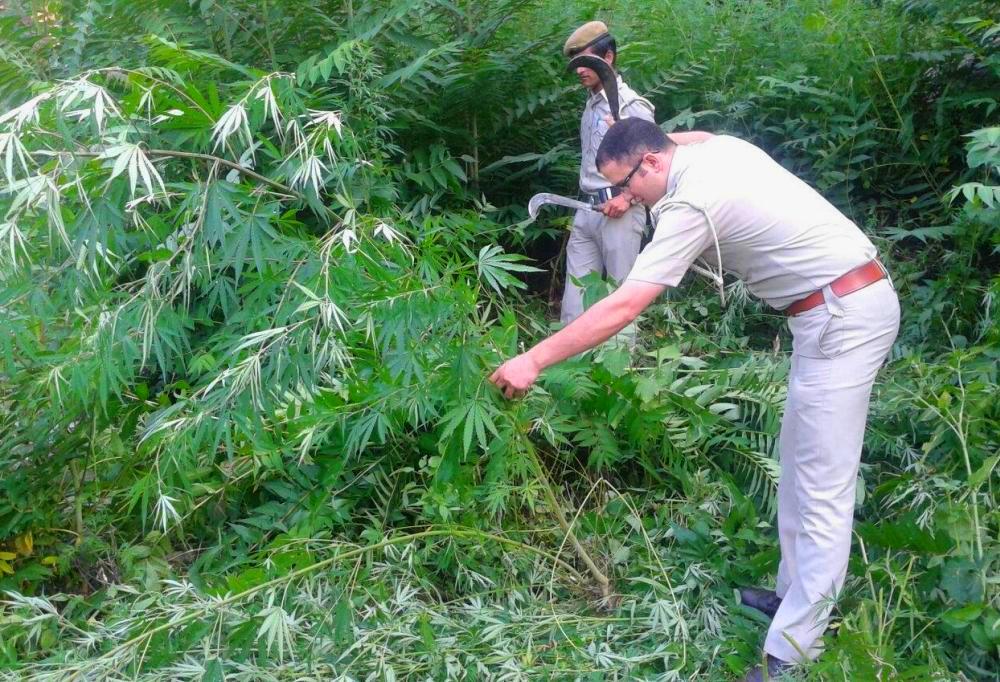 An official said the lure of drugs and quick bucks also attracts foreigners to the largely unexplored areas of Himachal Pradeshwhere they have become part of unorganised drug cultivation. Some of them never return home — they simply disappear mysteriously.

Police records show that there are 50,000 acres in Kullu Valley alone where cannabis is cultivated.

Chief Secretary V.C. Pharka, who was monitoring the fortnight-long statewide campaign that ended on September 5, said cannabis crops on 19,157 bighas of government land and 6,040 bighas of private land and 76,093 poppy plants were destroyed. (One bigha is 0.4 hectare.)

Countering this, BJP legislator and former minister Ravinder Ravi said that areas in the state bordering Punjab and Haryana have become drug hubs. The drug menace has assumed alarming proportions in pilgrim centres and tourist destinations too.

In the just-concluded assembly session, he said, a stationery shop in the vicinity of a senior secondary school in Thural, some 90 km from Dharamsala town, sold ink eraser fluid worth Rs 3 lakh in just one year.

Thural is a small sub-tehsil. There are one or two small government offices. The sale of fluid bottles worth Rs 3 lakh in a year is a matter of concern,

The volume of this clandestine trade can be gauged from a government reply in the assembly that 133 kg of “charas” or cannabis, 10 kg opium, 223 grams heroin, 6.03 kg ganja and 0.004 gm of smack was seized in the state in three months from April 1.

Officials say over 60 per cent of the poppy and cannabis produce in Himachal Pradesh is smuggled out to countries like Israel, Italy, Holland and some other European countries. The remaining finds its way to Nepal or Indian states like Goa, Punjaband Delhi.

In the past five years, over 70 foreigners, mainly Britons, Israelis, Dutch, Germans, Japanese and Italians, have been arrested under the Narcotic Drugs and Psychotropic Substances (NDPS) Act.

The Magic Valley in the upper reaches of Malana, some 50 km from Kullu town, is known for cultivating “Malana Cream”, the prized hashish, a purified resinous extract of cannabis.

Easy availability of Narcotics in McLeodganj and its surrounding areas in Kangra district and Kasol in Kullu district have turned the areas into an addicts’ haven, say the police.

The crime rate under the NDPS Act is 7.7 per cent in Himachal Pradesh, compared to 2.8 per cent in the country.

alternative farming is the only way of controlling poppy and cannabis cultivation.

Citing field surveys, he estimates over 2,500 villages dotted across inaccessible valleys and lofty mountains in Kullu, Chamba, Mandi, Shimla and Sirmaur districts are known for growing cannabis and poppy cultivation.

Referring to Malana, known for the prized hashish, Chief Minister Virbhadra Singh said the government would provide high-quality imported rootstock of apples to the locals so that they can opt for alternative and remunerative cultivation.

In other cannabis growing areas, he said the government would promote cultivation of exotic vegetables and flowers.