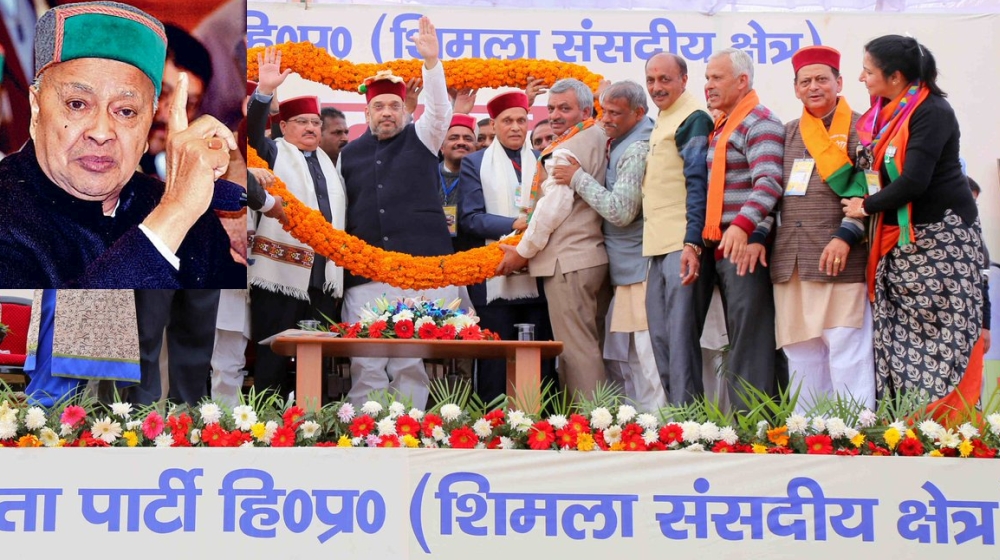 SHIMLA-While BJP is claiming their booth-level workers’ gathering ‘Tridev Sammelan’ in district Solan a huge success, the Congress has termed it a flop-show. The Chief Minister Virbhadra Singh has countered allegation leveled against the party by the National President of BJP Amit Shah in his address.

He corrected that Himachal didn’t receive even a penny for roads or for conducting National Highway survey as claimed by Shah. He said that BJP leaders are intentionally spreading malicious rumors to damage party reputation. He urged people to beware of BJP’s malicious propaganda.

Countering Shah’s claim that a sum of Rs 75 crore is already granted to the State government for roads, the CM said

Truth is that not even a single penny had been received from the centre. Claims of BJP to have given 61 National Highways to state was false.

Not even a sum of Rs 171 crore required for conducting surveys of National Highways had not been sanctioned by the Union Government,

Congress is Not Afraid of BJP’s Chargesheet, Will take legal action if allegations found Malicious

He further said that the Congress Party is not afraid of the charge-sheet BJP is preparing. If unfounded or baseless charges of corruption are leveled against the government, BJP should be ready to face legal consequences.

In his address Amit Shah had alleged that the Congress regime is “thoroughly corrupt”.

It is for the first time in history that a chief minister has deposited money acquired allegedly through corrupt means in his accounts. There is also no need for leaders such as former CM Prem Kumar Dhumal or Union Health Minister J P Nadda to allege that the state is not taking advantage of the Centre’s welfare initiatives because the local government is not keen on it,

said the statement of Amit Shah.

If any person in Congress is found to be involved in corruption with sufficient proofs, as per allegations in the chargesheet, the Government will not take a minute to take action against that person, he said.

The charge sheet being prepared by the BJP is a bundle of lies, and that the government won’t even back up filing defamation, if any baseless charges were leveled against any one, warned the CM. He also added that no Congress man can stoop so low, as the State BJP leaders are.

It is an old habit of BJP to involve in character assassination and misguide the people, he said. He further said that BJP is already facing the charges levelled by the Congress in its chargesheet for the wrong they had done.