SHIMLA- The Modern Central Kanda Jail, Shimla, Himachal Pradesh, has suspended HP police constable, Bhanu Prashar, who had exposed the startling security loophole inside the jail premises by posting a video on social media. The cop had also declared war against the alleged mistreatment of sub-ordinate staff by officers. The constable is now allegedly facing mental harassment for blowing the whistle. As per the cop, he hasn’t even received his salary for last five months, which has left him in serious financial crisis. After he received no support from his own department, he went on a hunger strike a few days ago. Now, he is admitted at Rippon hospital, Shimla after his health deteriorated. Shockingly, no senior police official or anyone from his own department has approached this cop to conduct fair inquiry. Instead, the Jail Superintendent, Sher Chand, had initiated probe against the cop.

The video shows two men using social media on computer. The constable had made shocking allegation that these two men visible in the video are actually prisoners, who are sentenced for serious crimes of murder and rape. One of them is a local. One of the prisoners shares same block in which an IS agent is imprisoned. The prisoners are allegedly sitting in the office.

When the Jail Superintendent was asked regarding the video, he explained the prisoners were working on a website and that jail authorities encourage educated inmates. However, the video very clearly shows that the two men were uploading a picture of kid on Facebook. Moreover, according to the suspended cop they were alone in the room and there was no one to monitor them.

Superintendent was unable to explain it why they were using Facebook. He instead labeled the Bhanu as an undisciplined cop, who has been in controversies.

The statement of the SP at least confirms that the video is not fake, and that it was actually recorded inside Kanda Jail.

Himachal Watcher talked to the suspended constable, who is a warder, to confirm the facts related to the matter. As per the constable, when he reported this grieve security breach to the seniors, he was suspended. Thereafter, the constable took to social media and posted the said video clip. The cop started a hunger strike a couple of days ago. On Monday, his condition deteriorated. But the authority didn’t provide him even an ambulance or attendant, Bhanu told HW on Monday. One of the constable’s friends, who is a teacher, brought him to Rippon hospital, Shimla in his personal car where he is admitted in emergency ward.

Please, listen to the video clip of Bhanu that he himself recorded on our request:

The cop has labeled serious allegations of harassment by his own department, framing false charges and cases that were used to exploit provisions of Central Civil Services against him.

He hasn’t received his salary for last four months, he alleged. When he asked for the reason behind withholding his salary, he wasn’t given any explanation but just reference to some CCS rules.

Our manual of rules for jails is written in such a way that honest and helpless cops are turned into slaves of officers,

I have faced suspension orders earlier too because I broke the silence and complaint of what is wrong. Everytime I tried to raise my voice, I was harassed, 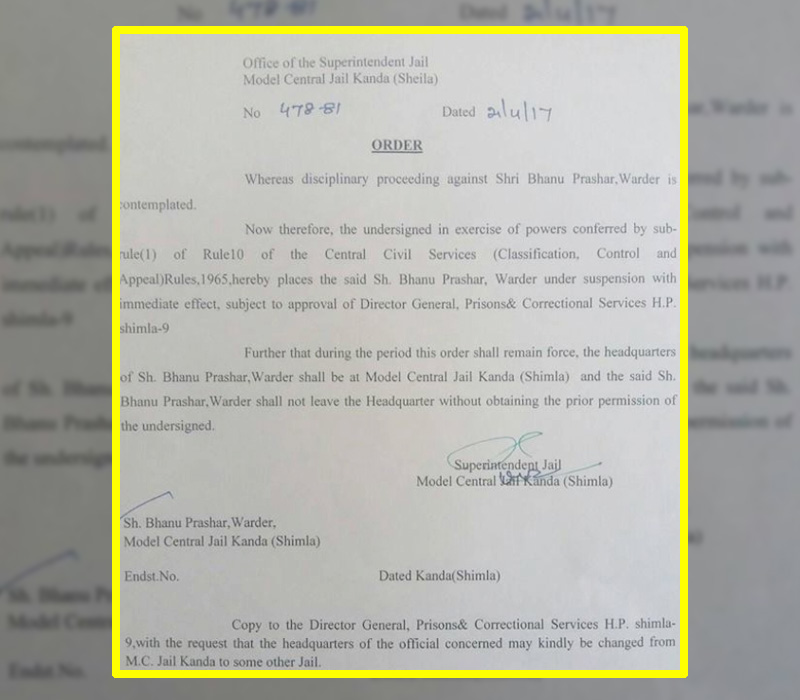 In 10 years of my service, now I have become insensitive like a stone,

It’s a very usual scene to see prisoners accessing internet using computers installed in rooms of officers, which is shocking from the point of security, he told HW. He further alleged that some prisoners even have full access to cellphones and internet. Prisoners are allowed to go out without parole, he alleged. Prisoners do use money to please the authorities and get better treatment.

The constable has also alleged jail authority of corruption in matters of management of resources. A packet of biri is over-priced in Jail canteen, expired goods are sold, and almost every affair of the jail is subject to question, he alleged.

After suspension, now he alleges authority of harassing him mentally. After suspension, he is not allowed to leave headquarter without obtaining permission. He even pointed out that the colleagues who had liked the video on social media also faced wrath of the authority.

In fact, everytime I complained or brought such issues to higher officials, I either faced transfer or humiliation,

Before posting the video, I tried to contact the DG prison, Somesh Goyal, IPS, through social media. I left a message for him on his Facebook profile, but didn’t receive any response. He is an honest and active officer. I don’t know why he isn’t responding. I want him to come to the prison and take a round in the presence of media to confirm my allegations,

The department has not come out with any statement and seems to be sweating to hush the matter. However, the cop seeks support of people and honest officials to bring the matter to justice.