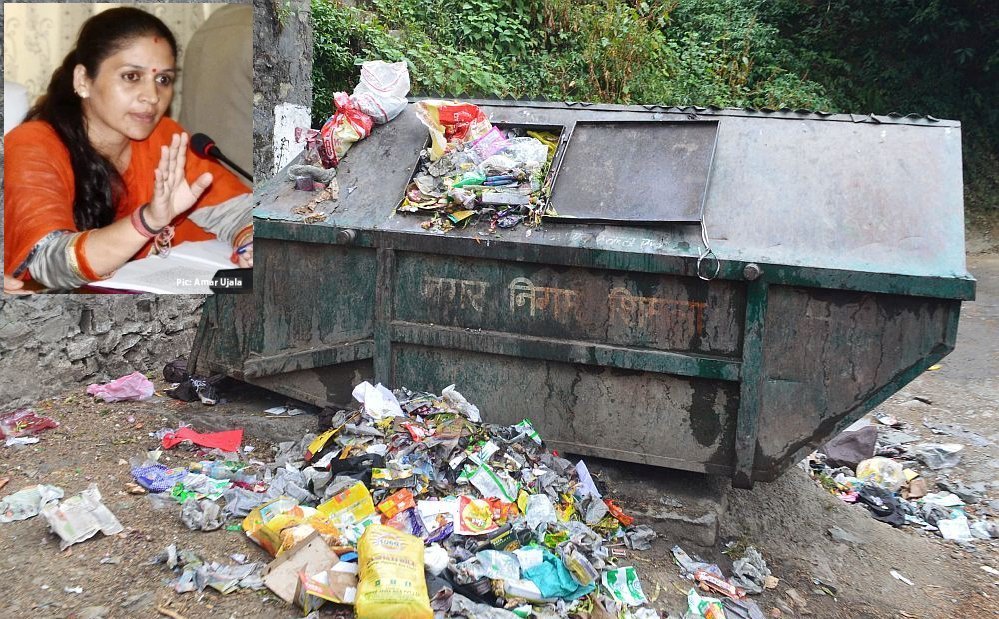 SHEB workers alleged the Mayor of using inappropriate and abusive language when they approached her office to discuss their demands. The workers have demanded an apology from the Mayor.

Shimla: Shimla Municipal Corporation is mulling over plans to outsource work of door-to-door garbage collection to private contractors. The entire sanitation work of Shimla Heritage and Beautification Society (SHEB) costs 4.4 crores rupees per year to MC.  Some private contractors are believed to have their eyes on this amount.

Following it, SHEB Society has warned the Corporation of fast until death if the work is outsourced.

It is pertinent to mention that the SHEB Workers’ Union has initiated a five- day strike from September 1 due to which the sanitation condition of the capital city is likely to get uglier. Along with their demands including a hike in monthly wages, MC’s plan to outsource their work to private hands is another reason for this strike.

Currently, over 900 sanitation workers are employed in garbage collection in Shimla city. The workers said they are paid only Rs. 5800 per month only, which is not sufficient. They are demanding minimum Rs. 10500 as monthly wages.

Though the Mayor of Shimla, Kusum Sadret, denied having any such plans, the proposal for the invitation of tenders was, in fact, presented before the MC House for approval a few days ago.

The copy of the proposal shows that it was duly signed by the MC Health Officer and the Commissioner. The proposal said the SHEB Society is not working properly. The wages of the workers were hiked by 10 percent recently, but still, the workers are threatening to go on strike from September 1, 2017, as they are not satisfied with it.

It is requested to outsource this work of door to door garbage collection by floating tenders from companies/NGOs, Consortium, firms, professionals or individuals for same,

Previous Mayor of Shimla, Sanjay Chauhan, condemned this step. He said after coming into power at MC House, Bhartiya Janata Party is trying to privatize the work to benefit their favorites.

The door to door garbage collection facility was launched in 2010. The work was then given to a private company by the BJP-ruled state government. The company had failed in executing the work. Therefore, the work was given to SHEB Society. Workers were recruited and the facility worked efficiently.

Chauhan said that currently 90 percent houses are connected with door to door garbage collection facility. He said the SHEB workers are regularly discharging their duty even in unfavorable weather conditions.

The capital has a waste treatment plant equipped with modern technology that converts garbage into electricity.

During his tenure, Chauhan added, the MC had passed a proposal to consider the SHEB workers as the Corporation employees and sent it to the state government for approval. Hundreds of posts are vacant in MC due to recruitment policy of the government, he said.

However, the current MC is planning to hand over the SHEB Society to private hands where the workers would be exploited to extract maximum benefit, he said.

Apparently, the private contractor would be interested in paying minimum wages and take maximum work from these workers.

He said the CPI (M) would not hesitate to launch a campaign against the MC if the decision to outsource SHEB Society is not withdrawn.

The SHEB workers also alleged the Mayor of using inappropriate and abusive language when they approached her office to discuss their demands. The workers said she started hurling abuses at them as soon as they reach the door of her office,

The workers have demanded a written apology from the Mayor.

The Mayor, however, denies these allegations and said the strike by the workers is a pre-planned move. She said it is not feasible to make more hikes in their wages at all. She said the last decision over the demands of the workers will be taken on September 11 after a meeting with the Minister of Urban Development.

The Mayor has also warned the workers of stern action if they continued with their strike.