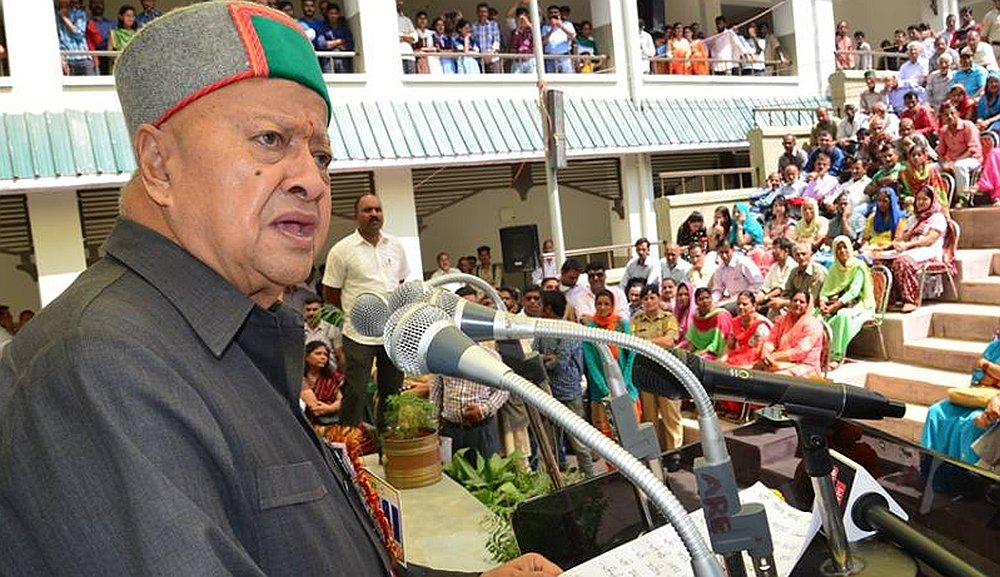 The entire ‘bumper crop” episode was just a fabrication. As per allegations, it implies that there were no additional apples produce in fact. If there were no apples, then nothing was transported to the market and nothing was sold.

Shimla: The HP Assembly polls are around the corner but the Chief Minister Virbhadra Singh, who has already been on target of multiple investigation agencies, opposition, and even a group of own party-men over the alleged corrupted charges, did not appear to find any respite from any side.

The only relief had come in May 2017, when the Central Bureau of Investigation court had granted Virbhadra and his wife Pratibha Singh in nearly Rs 10 crore disproportionate assets case.

Now, as an another jolt, the state High Court on October 5, 2017, rejected Chief Minister’s plea challenging the orders passed by the Income Tax Appellate Tribunal (ITAT).

On March 18, 2014, the Income Tax Commissioner had rejected the fresh assessment of income tax returns of the Chief Minister pertaining to the 2009-2010 financial year.

The assessing authority had accepted the revised returns, but the IT Department did not.

The CM had claimed the rise in income was a result of a bumper harvest of the apple crop.

The allegations said the documents showed that apples were shipped on scooters, oil tankers and motorcycles to a non-functional market. These apples were then sold to unknown firms with non-existent addresses.

In nutshell, the investigating agencies allege that the entire ‘bumper crop” episode was just a fabrication. As per allegations, it implies that there were no additional apples produce in fact. If there were no apples, then nothing was transported to the market and nothing was sold.

The allegations are that the Chief Minister tried to convert his black money into white by showing it as agricultural income.

The CM challenged the orders in IT Commissioner. On December 8, 2016, the Tribunal too upheld the Commissioner’s order.

On rejection of the revised income tax returns filed by him, Virbhadra had termed it a “politically motivated” move. Virbhadra Singh had been maintaining that these cases are falsely framed to damage his political reputation.

Virbhadra had even alleged that the Income-tax Tribunal was set up by the Union Finance minister Arun Jaitley and two special judges were sent from Delhi to hear his case.

Recently, the CM had remarked that Prime Minister Narender Modi loves him so much that he has engaged three investigation agencies to probe one case against him.

He had maintained that he would file an appeal in the High Court and also in the Supreme Court if the need arose.

Other than the IT-Department, the Central Bureau of Investigation had also filed a FIR against the CM based on these allegations.

Th Enforcement Directorate (ED) under union finance ministry followed the development and registered a case of money laundering against him, his wife and others in 2015. The ED alleged that Virbhadra Singh used “bogus entries” for transfer of the ill-gotten money.

In September 2017, a special court had confirmed the attachment of this farmhouse worth 27. 29 crore located in Dera Mandi near Mehrauli of south Delhi area under the Prevention of Money Laundering Act (PMLA).

The political campaigns of the opposition have been mostly feeding on the corruption charges against the CM. The fresh development in the case is likely to boost the trend.

Himachal batsman hits 300 in First Class cricket , that too on his birthday