Shimla: Finally, after a wait of 40 days since the polling day, the results of the elections held to the Legislative Assembly of Himachal Pradesh on November 9, 2017, were officially announced by the Elections Commission of India.

True to its traditional trend of ousting ruling party every five years, the people of Himachal gave the Bhartiya Janata Party (BJP) its turn to prove itself.

BJP dethroned the ruling Congress Government by claiming a thumping victory on 44 seats (67.7%) out of total 68, which gives a full majority to the saffron party. On the other hand, Congress was reduced to 21 (30.9%)as compared to 36 in 2017 assembly elections. Two seats (4.4%) went to the two independent candidates contesting from Dehra and Jogindernagar and one to CPM’s Rakesh Singha. 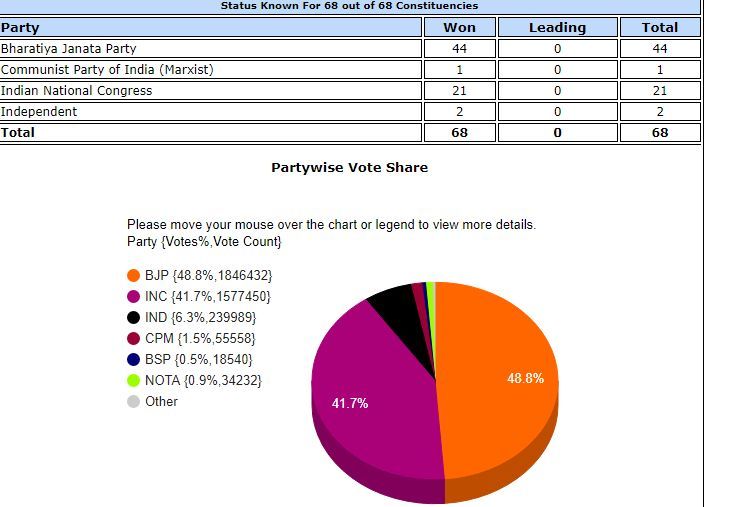 However, as an ironical event for the BJP, its Chief Ministerial candidate Prem Kumar Dhumal was decimated as he was defeated by Congress’ Rajinder Rana from the Sujanpur constituency with a margin of approximately 3,500 votes. Clearly, the people have voted for the Prime Minister Narendra Modi and not for BJP’s Dhumal. It could mean an end of the political career for Dhumal.

Personal loss is not of much importance.The gain that victory has brought to state BJP is important. Thankful to people of the state for voting for BJP. In politics, sometimes one wins, sometimes one loses. I was not expecting to lose, I will do an analysis: PK Dhumal #Himachal pic.twitter.com/7UrumoxVhp

Not only Dhumal but the party’s state unit president Satpal Singh Satti was also defeated by Congress’s Satpal Sigh Raizada in Una constituency. Now, the BJP will have to find another candidate for the CM’s chair.

It implies that the people have approved the policies of Modi like the demonetization, introduction of Good Services Tax (GST), an even the undemocratic tricks it played in the money bill it had passed earlier this year.

Also, the BJP’s Hindutva card had its ramifications in Gujarat, but not in Himachal as the share of votes in Gujarat dropped below 100 as compared to 155 in previous elections.

Moreover, the BJP has invested heavily in campaigning. Against about 70 rallies of the Congress, BJP was far ahead with near about 200 rallies for the current elections.

Another major re-shuffle was reported from the Theog constituency, where the CPI (M) candidate and former MLA Rakesh Singh emerged as the people’s choice. The left felt its presence again after a gap of 24 years.

The Chief Minister Virbhadra Singh (83) and his son Vikramaditya (29), who fought his first elections to the HP Legislative Assembly, attained victory on the Ark and Shimla-Rural seat respectively. Virbhadra defeated Rattan Singh Pal and won with a margin of 6,024 votes.

He attained victory owing to his influence that he gained while ruling the state in 1983, 1990, 1993, 2003, and 2012. The corruption charges did not affect Virbhadra but proved fatal for the Congress.

If it was the last elections for Virbhadra Singh, the exceptional political career of Virbhadra Singh concluded at a note of defeat of his party. However, the fact that Virbhadra managed to gain a victory for his son would before his retirement is likely compensate for this defeat of his government.

Vikramaditya defeated BJP’s Pramod Sharma by 4850 votes in the battle for the Shimla-rural seat.

I accept the victory of BJP. I, being the CM, take full responsibility of our performance here. I hope Vikramaditya (Singh) keeps winning in future, like he won today: Virbhadra Singh #HimachalPradesh pic.twitter.com/ImNkW32qdy

The first official result was declared for the Kasumpti constituency, where Anirudh Singh defeated BJP’s Vijay Jyoti by a margin of 9,397 votes.

Interesingly, the BJP has registered victory in regions where Rahul Gandhi has held rallies for the Congress.

The Congress party accepts the verdict of the people and congratulates the new governments in both states. I thank the people of Gujarat and Himachal with all my heart for the love they showed me.

A total of 377 candidates contested for 68 seats. While the BJP and Congress fielded candidates on all seats, the BSP contested on 42 seats followed by the CPI(M) at 14, the Swabhiman party and the Lok Gatbhandhan Party six each.

Biggest jolt for the Congress came from Mandi district where 9 seats out of total 10 were won by the BJP candidates and the remaining one went to the Indpendent candidate contesting from Jogindernagar.

Also, in Nagrota constituency, BJP’s Arun Kumar defeated Congress’s influential leader GS Bali by 519 votes. Other close battles included six seats where the margins were reported to be below 1,000 votes.

I’ll always stand with govt, whichever party it might be of, & serve people. As a son I am sad we couldn’t make it possible for him (Virbhadra Singh) to become the CM 7th time. We’ll analyse our drawbacks in meeting: Vikramaditya Singh, leading in Shimla Rural #HimachalElections pic.twitter.com/GEV1CTnQfQ

The counting of votes was held at 48 centres for 68 seats. The BJP was leading since the counting begun today morning, and its workers had begun the celebration by 11 am without waiting for the final results.

I bow to the people of Gujarat and Himachal Pradesh for their affection and trust in BJP. I assure them that we will leave no stone unturned in furthering the development journey of these states and serve the people tirelessly

The corruption charges against Virbhadra Singh being investigated by the Central Bureau of Investigation, recent law and order issues, and lousy governance went against the Congress. So, this time people want Virbhadra Singh and his son, but not Congress.

Similarly, the people want the BJP to form the government, but not under the leadership of PK Dhumal.

Further, to the reports of the temerping with EVMs, the Elections Commission said,

EVMs cannot be manipulated in any way. I want to urge everyone to ignore rumours on this matter. The election conducted through EVMs & VVPAT are completely unbiased: Pushpendra Rajput, Chief Electoral Officer of Himachal Pradesh #ElectionResults2017 pic.twitter.com/x2qikY8Tqa