Shimla: In yet another major incident of fire breakout in rural Shimla, over 40 houses were completely devoured by a fire in Kshaini village of Tikkar Panchayat in Rohru. Over 60 families are believed to have lost all belongings in addition to their homes. The fire has caused damaged worth crores of rupees.

Fortunately, no loss of life was reported.

Once again, as an irresponsible act, the first fire tender reached the spot with an empty tank. As per the locals, the tender stayed at the spot for some time while staff watched the village burning. The tender was then sent to fetch water.

The damage could have been contained to lesser houses if the Himachal Pradesh’s Fire Services had not sent an empty fire tender to the spot.

As per the initial information provided by the Deputy Commissioner of Shimla, Amit Kashyap, and the Superintendent of Police, Omapati Jamwal, the fire broke out in one of the houses in wee hours of April 18 at about 2:00 AM. As the houses in the village were mostly built of wood in a traditional Himachali style, they easily caught fire. There are over 150 houses in this village, all of which were in the range of the fire. However, the residents and locals from nearby villages struggled for over five hours before they doused the fire.

The district administration has provided an immediate relief of Rs. 10, 000, cloths, and ration to the villagers who were rendered homeless, informed the SDM Rohru. Though the cause of the fire is still to be investigated, as usual, it was believed to be a short-circuit. The revenue officers are likely to complete the list of affected victims and the estimated financial loss caused by the fire.

The carelessness of the fire department is shocking. The people are bewildered as to what kind of response is it to send empty tenders to the sight of fire breakout?

The villagers not only lost houses, but Himachal lost some of the finest wooden work done in a traditional style. More information is awaited.

From last year to the present date, over a dozen of such incidents of major fires have been reported in various villages of Himachal in which several houses were turned into ashes.

Beheading of youth in Kullu creates panic among locals Shimla- In the last 24-hours, Himachal Pradesh has reported 70 fatalities due to coronavirus, according to official data released by the state government. The death toll as of now stands at 2,311. Meanwhile, 2,378 new cases of infection were detected according to official data since Saturday evening till now; this takes the total number of Covid cases in the state to 1,60,240 to date. Out of this, 36,909 are active cases of infection.

The highest number of casualties were reported from Kangra district where 30 patients succumbed to severe symptoms of coronavirus. Out of these 30 deaths, only one patient had hypertension as comorbidity while others had no prior medical conditions, as shown by state data. In the Shimla district, 11 patients were reported dead. 55 out of 70 patients who succumbed to the infection had no comorbidities; while 19 patients were below the age of 50.

Despite consistently rising fatality rate, the state government is struggling to increase testing. On Sunday, the total sampling fell to 1086 from 15461 on Saturday. With low testing, the number of positive cases also went down. This failure would make it difficult to assess the true scale of the spread, which could prove to be fatal for the population of the state. Moreover, the state government hasn’t clarified as to what’s keeping it from boosting daily testing.

Out of 10,084 people who were sampled for Covid infection on Sunday, 3,188 results remain awaited From May 17, vaccination for people between the age group of 18-44 will also begin in Himachal Pradesh. The state government had informed that it has procured 1,07,620 doses of Covishield vaccine from the Serum Institute of India, Pune, for the upcoming phase of the vaccination drive, according to Special Health Secretary Nipun Jindal.

Meanwhile, a large number citizen between 18-45 age group who were trying to register on the Cowin portal complained of inconveniences. 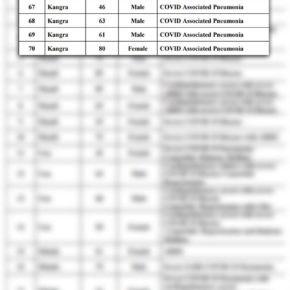