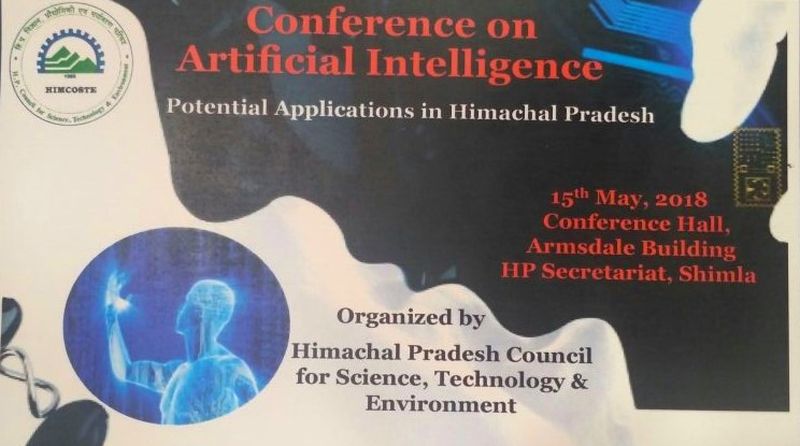 Shimla: Himachal Pradesh Council for Science, Technology and Environment (HIMCOSTE )today organized a Conference on ‘Artificial Intelligence: Potential Applications in Himachal Pradesh’ at at the State Secretariat in Shimla.

Though the State Government is still struggling to provide basic facilities like water, waste treatment facilities, good roads, parking etc. to the citizens in Himachal’s towns, the Chief Minister has still ensured maximum use of AI and technology in governance and administration.

The tech-team supposed to run the show also appeared to be struggling with projectors and laptops.

However, the presence of the national experts gave some relevance to the conference.

Among these, the Chairperson, Department of Computer Science and Engineering IIT Madras and Chairperson Artificial Intelligence Task Force Prof V. Kamakoti said that AI was poised towards economic transformation in the next few years.

He said that all the systems in the machine that make intelligent decisions could be called Artificial Intelligence. Every project sanctioned by the Government could be geo-tagged and review and monitor the projects themselves. This can give a sense of participation in the government projects, he added.

He said that in the next five years advisory solutions, healthcare, IT Services, BPO etc could emerge as major job creator due to use of AI in these areas.

Numerous companies in India, particularly e-commerce businesses as well as many start-ups were beginning to exploit AI techniques.

Additional Chief Secretary, Science, Technology, Environment, and Chairperson HIMCOSTE Tarun Kapoor said that the Artificial intelligence would be the largest creator of jobs in the next few years.

Director, CSIR Institute of Genomics and Integrative Biology, New Delhi Dr Anurag Aggarwal gave a detailed presentation on AI and human intelligence. He said that Intelligent Infrastructure and AI can handle most of the definable tasks in governance. He said that AI can also play a key role in the field of medicine since medical knowledge was expanding with the expansion of AI.

Further, the Chief Minister said that the AI and technology could also be helpful in checking illegal constructions and in forest mapping to check illegal forest felling.

The AI could emerge as an effective tool for ensuring effective and accountable administration. The illegal mining was another area, which could be checked by optimum use of artificial intelligence, he said.

This technology would be used for monitoring of ongoing developmental projects to ensure their timely completion.

Further, the Government said the optimum use of Artificial Intelligence will be ensured for effective, transparent, responsive and good governance to the people.