Shimla: As the monsoon knocks at the doors of Himachal Pradesh, heavy rains have begun to wreak havoc. On the intervening nights of June 28 and 29, a cloudburst was reported in Churah Sub-Division of Chamba district in which as many as 15 livestock were washed away.

The Ravi River was on fury as the water level rose to an alarming level.

On the other hand, the Manali-Leh road was blocked due to a landslide between Rohtang and Manali. It caused a long traffic jam on both sides of the road. As per the district administration, machinery has been dispatched to the spot of the landslide, and the road would be opened for traffic as soon as possible.

A large number of tourists were stuck in the traffic jam.

Further, various rivulets and nullahs were said to be on fury due to a surge in water level in Lahaul valley’s Teling and Jingjingbar.

Similarly, travelling on Manali-Kaza road has also become quite riskier due to ongoing rains. A couple of days ago, some motorbikes were washed away after level rose in the Chotta Darra nullah of Spiti.

The district administration of Mandi has also issued a warning to locals and tourist to avoid going near Ulh river and its rivulets.

Yesterday,  a warning of water-discharge from Largi dam was issued as its gates were opened to release excess water. It has affected the Pandoh dam due to which water is being released into the Beas River.

It is pertinent to mention that a large number of people have lost their lives after they were caught unaware by a sudden surge in water levels due to discharge from dams or due to floods caused by rains.

In one of the most tragic incident, 24 students of a Hyderabad-based engineering college were killed after a sudden surge in water struck them. The water was discharged upstream from Largi dam, and authorities had faced criticism for not issuing a proper warning before opening gates of the dam.

Further, the Meteorological Department has warned of statewide heavy rains and possibility of landslides upto June 30.

Due to continued occurrence of rainfall activity over the state, there would be the possibility of landslides and falling of trees over the sensitive areas. Water-logging may occur in the fields of Kharif crops in the lower districts of the state,

Further, as per the Met, from June 1, 2018, to 27, Himachal Pradesh recorded rainfall of 67.3 mm, which is 12% more than the normal precipitation during this period. Una district has recorded 41% more rainfall than its normal values. 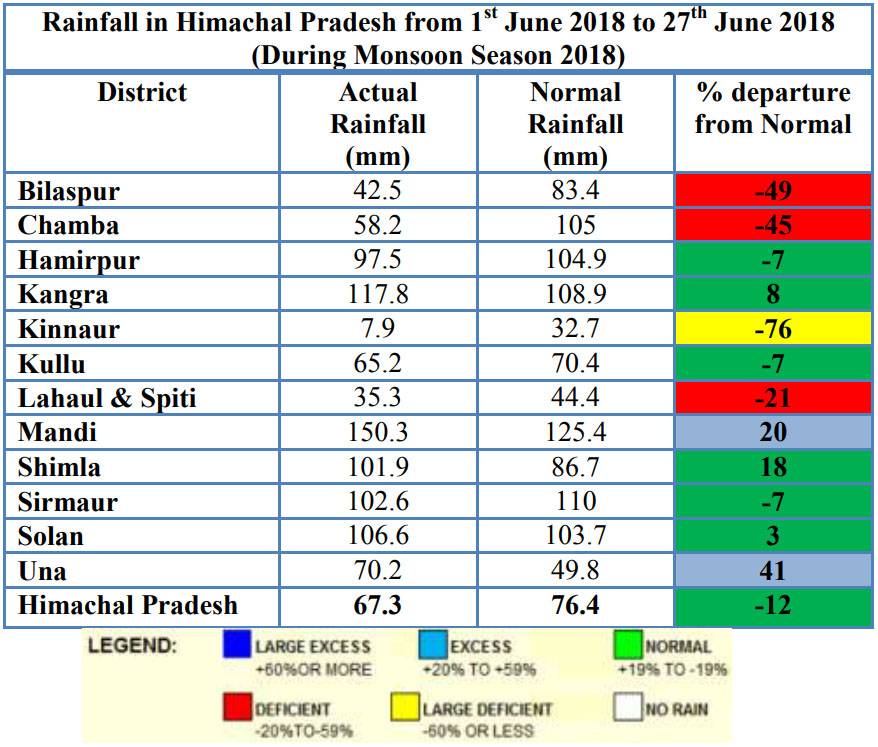 Meanwhile, the public in Shimla City is facing huge inconvenience as rainwater flooded the roads. The rainwater drainages are either blocked or poorly planned and maintained. The local civic body is facing criticism after people uploaded videos on social media.