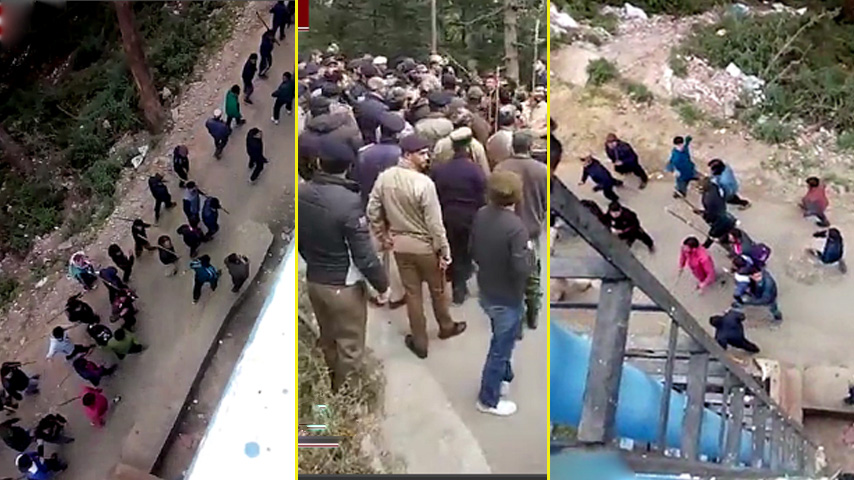 Shimla- RSS, ABVP, and SFI  had been creating a hue and cry over bloodshed at the HPU hostels. RSS was holding SFI the sole responsible agent, while SFI claimed they did not initiate this .

The video was recorded on the Morning of March 25, 2019. SFI alleged all these people were RSS and ABVP workers.

Expressing shock, the student outfit said the violence was being committed in the presence of heavy police force.  SFI and CPIM leadership have alleged that none of the RSS workers or leaders was arrested despite this naked dance of hooliganism.

They have asked the state government what workers of RSS were doing at the hostels with lathis.

ABVP alleged that stones were first pelted on them from hostels.

At the same time, ABVP posted a video clip on its Facebook page showing SFI workers shouting slogans inside Boileauganj Police Station. They slogans to be derogatory ‘Bharat Mata’.

The SFI has a different theory, however. It alleged that this violence was conspired intentionally to create tension and divert the attention of the media and the people from alleged irregularities in recruitment of about nine employees. SFI alleges that HPU outsourced these employees from a private company that is owned by an ex-ABVP member and RSS worker.  It was also alleged that the HPU did not follow correct procedure in outsourcing.  SFI alleged that on the direction of the Education Minister Suresh Bhardwaj only a single tender was entertained contrary to the obligation of minimum three tenders.

SFI said it had staged a protest on March 16, 2019, regarding the same issue. It was only after the protests and demands for an investigation that RSS chose to organize their Shakha adjacent to boys’ hostels.

ABVP, however, claims that this violence was initiated by SFI workers over a ground adjacent to hostels. RSS workers wanted to organize a Shakha in this ground while SFI workers insisted on playing cricket, ABVP maintains.

ABVP today also gheraoed the Chief Warden alleging that some SFI workers were living in hostels illegally. They demanded action against them and demanded resignation of the Chief Warden in case he fails to take action. ABVP alleged that these illegal entrants create tension in hostels.

Sadly, the neutral students, who are not associated with any of student groups or political organizations, are bearing the brunt of this violence, which appeared to be avoidable. Also, hostels- a property of the HPU- is being vandalized in this violence.