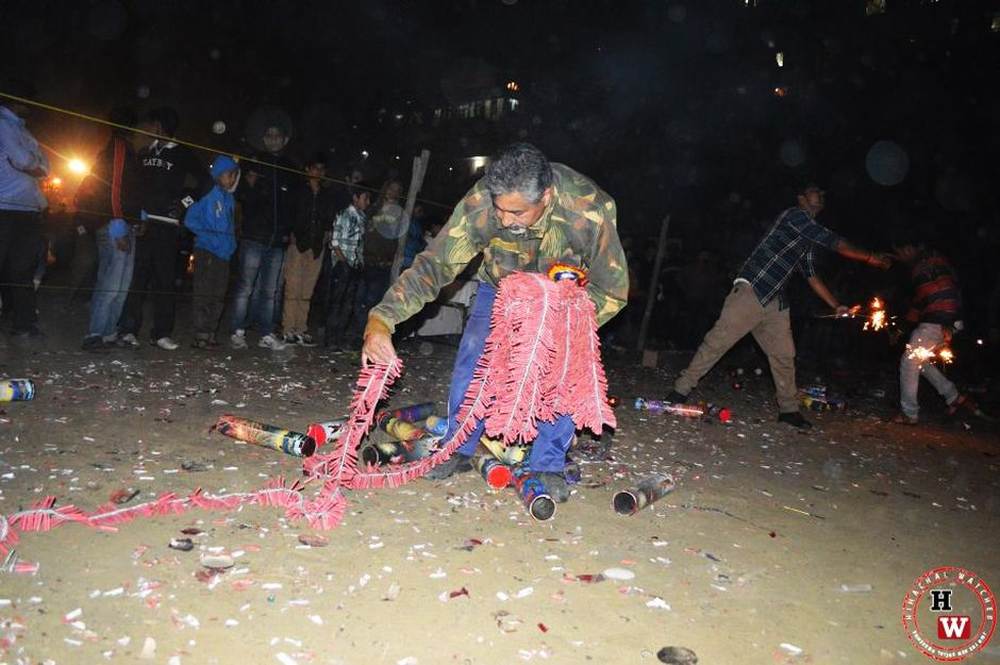 Shimla-Himachal Pradesh Pollution Control Board, ahead of Diwali festival, has urged the department of education to educate children about the harmful effects of air and noise pollution caused due to bursting of firecrackers and also to encourage them to celebrate pollution-free Diwali.

The board has also urged the people of the State to celebrate this festival of light in an eco-friendly way and say no to firecrackers.

The HP PCB said that to access the impact of the bursting of firecrackers during the forthcoming Diwali festival, it will conduct a special monitoring drive in the state. During this drive, the board will assess the ambient air and noise quality in the State.

HP PCB said that necessary directions have been issued to all the regional officers and laboratory In-Charges of the State Board to conduct extensive ambient air quality monitoring derive with effect from October 20 to November 3, 2019.

Ambient noise monitoring will also be conducted during pre- Diwali October on 21 and on the day of Diwali (October 27).

During this monitoring drive, apart from general parameters like particular Matters (PM10, PM 2.5), oxides of Sulphur and Nitrogen, Carbon Monoxide and Ammonia some additional parameters like Lead, Nickel, arsenic, Barium, Iron and Strontium will also be monitored, the PCB said.

PCB said that all the Deputy Commissioners and Superintendent of Police have been directed to ensure that no firework of firecrackers should be allowed to burst in the 100 meters vicinity of the silence zone such as hospitals, educational institutions, courts etc. as per the provision of law.

Sales and use of firecrackers generating noise level exceeding 125 dBA is also prohibited.

Ironically, the Board has no check on various other activities that cause air pollution throughout the year. For example, garbage burning is rampant in the state. While the practice is regular in rural areas and municipal councils, the Municipal Corporation of capital Shimla is also not far behind.

Moreover, there is no check on vehicular emissions as both HP PCB and the State Police refuse to take responsibility for it. The ‘No Honking’ campaign to reduce noise pollution in the state has also failed miserably as no steps were taken to create awareness or to deter people from honking unnecessarily. Considering these facts, it sounds odd that the PCB would actually be striving to check air and noise pollution ahead of Diwali. 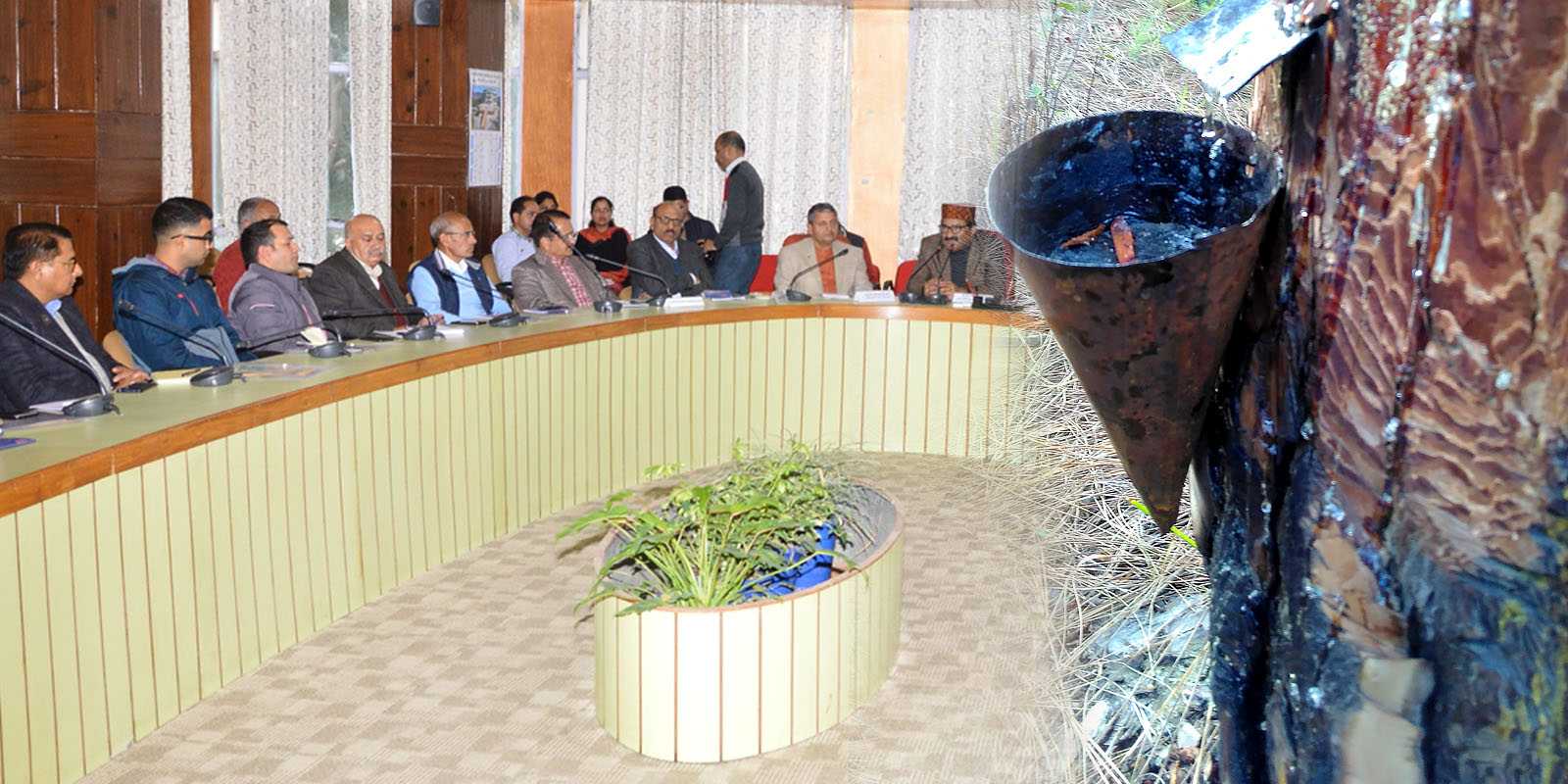 Solan-In the past decade, intensive resin tapping by rill method has resulted in the drying of thousands of pine trees in Himachal Pradesh. It has also been observed, that the application of higher concentration of acid, used as a freshener, had adversely affected the growth of trees and even the tapped surface area is not healing.

Therefore, the HP State Forest Development Corporation will soon adopt the borehole technique of oleoresin extraction to minimize the damage caused to pine trees by resin tapping and simultaneously increase the quality of the collected resin.

It was informed by Himachal Pradesh Forest Minister Sh. Gobind Singh Thakur during the concluding session of the one-day training of officials from HP State Forest Development Corporation at the Dr YS Parmar University of Horticulture and Forestry (UHF) Nauni. The method has been developed by the scientists of the Forest Products Department of the university. 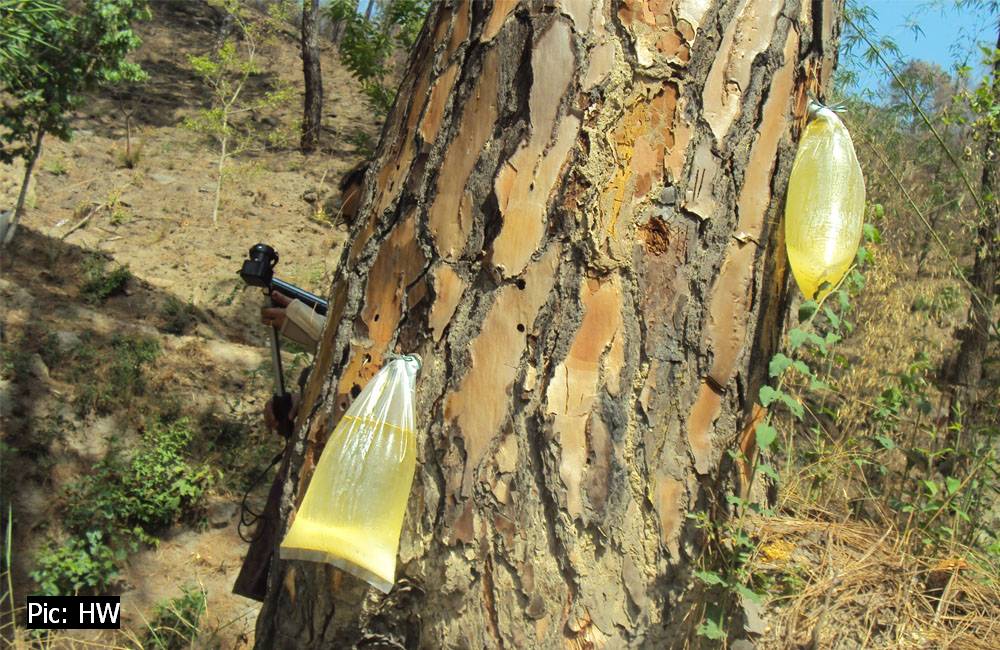 The Forest Minister said that the department would adopt the new technique in the coming time so that the twin motives of resin quality and its quantity along with ensuring the good health of the trees can be met. He said that the Forest Department will work in collaboration with the university so that the benefit of the various technologies developed by it can be put to the best use for the development of the state.

BD Suyal, MD State Forest Corporation said that technique is quite encouraging and the corporation will take up setting up 10-15,000 bores in every directorate to assess the results of the method. He added that in the second phase the contractors and the labourers will be also be trained on technique by the university. Earlier, Dr Kulwant Rai Sharma gave a detailed presentation and practical demonstration on the technique to the forest officials. He said that the adoption of the technology can prove to be boon for the forests and the resin industry.

What is Borehole Method of Resin Extraction

The new method involves drilling small holes (1 inch wide and 4 inches deep) with the help of simple tools into the tree to open its resin ducts. The holes are drilled with a slight slope towards the opening, so that oleoresin drains freely. Multiple boreholes are arrayed evenly around the tree’s circumference, or clustered in groups of two or three. Spouts are tightly fitted into the opening with polythene bags attached to it with the help of tie for resin collection. 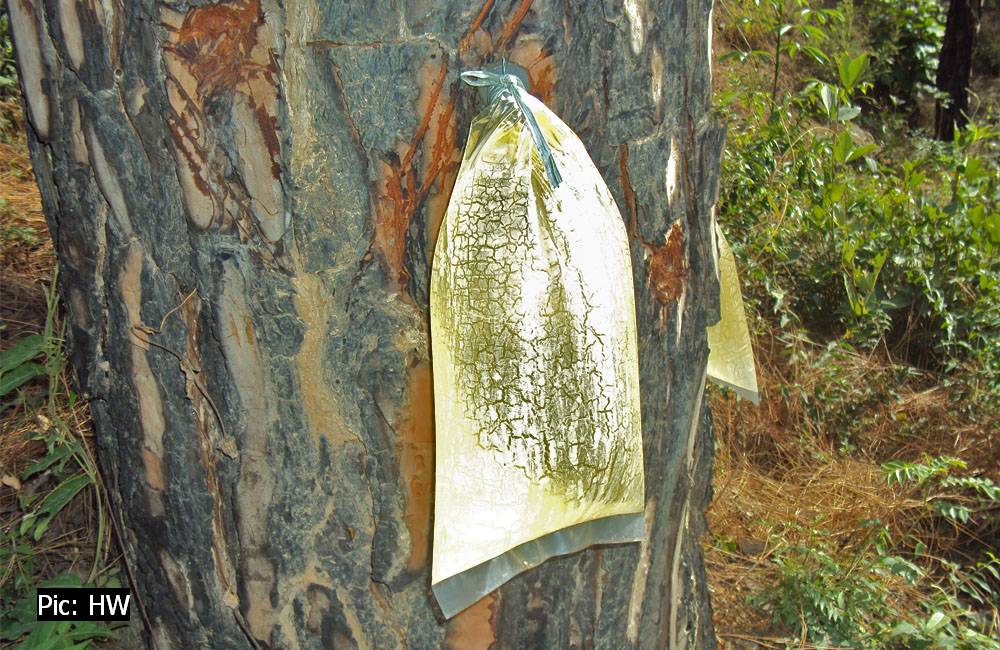 The new technique was developed in an attempt to overcome some of the limitations of other conventional methods. A key feature of the method is that a closed collection apparatus prevents premature solidification of resin acids, thereby maintaining oleoresin flow for an extended period of up to six months. Due to reduced oxidation and contamination, the end product is of higher quality with substantially higher turpentine. The average yield per tree is almost the same if numbers of boreholes on a tree are adjusted as per the maximum carrying capacity of the tree. The method also allows tapping of lower diameter trees depending upon their potential of production without having any impact on their health. The crown fire hazards incidents are also less because there is no hard resin accumulation on the main stem and spread of ground blaze can be easily avoided by removing the bags well in time.

The rosin and turpentine oil obtained from borehole method are of very good quality, which can fetch higher prices in the market. In addition to tackling the problems of tree health, labour requirements and costs for borehole tapping are significantly lower than conventional methods. The borehole wounds cause little damage to the tree bark and since these holes are near the ground level, only a healed scar can be seen in the converted woods. Therefore, there is no damage to the merchantable part of the tree.

UHF Vice-Chancellor Dr Parvinder Kaushal called for continuous interaction between the university and the forest department. He emphasized on apprising the grass root level workers and train them on the new technique.

The event was attended by  BD Suyal, Managing Director, HP Forest Corporation; KK Kataik Director(South); Dr JN Sharma, Director Research, Dr Kulwant Rai Dean College of Forestry and other officials of the university. Around 30 officers of the rank of Divisional Managers and Assistant Managers from various parts of the state took part in the training. 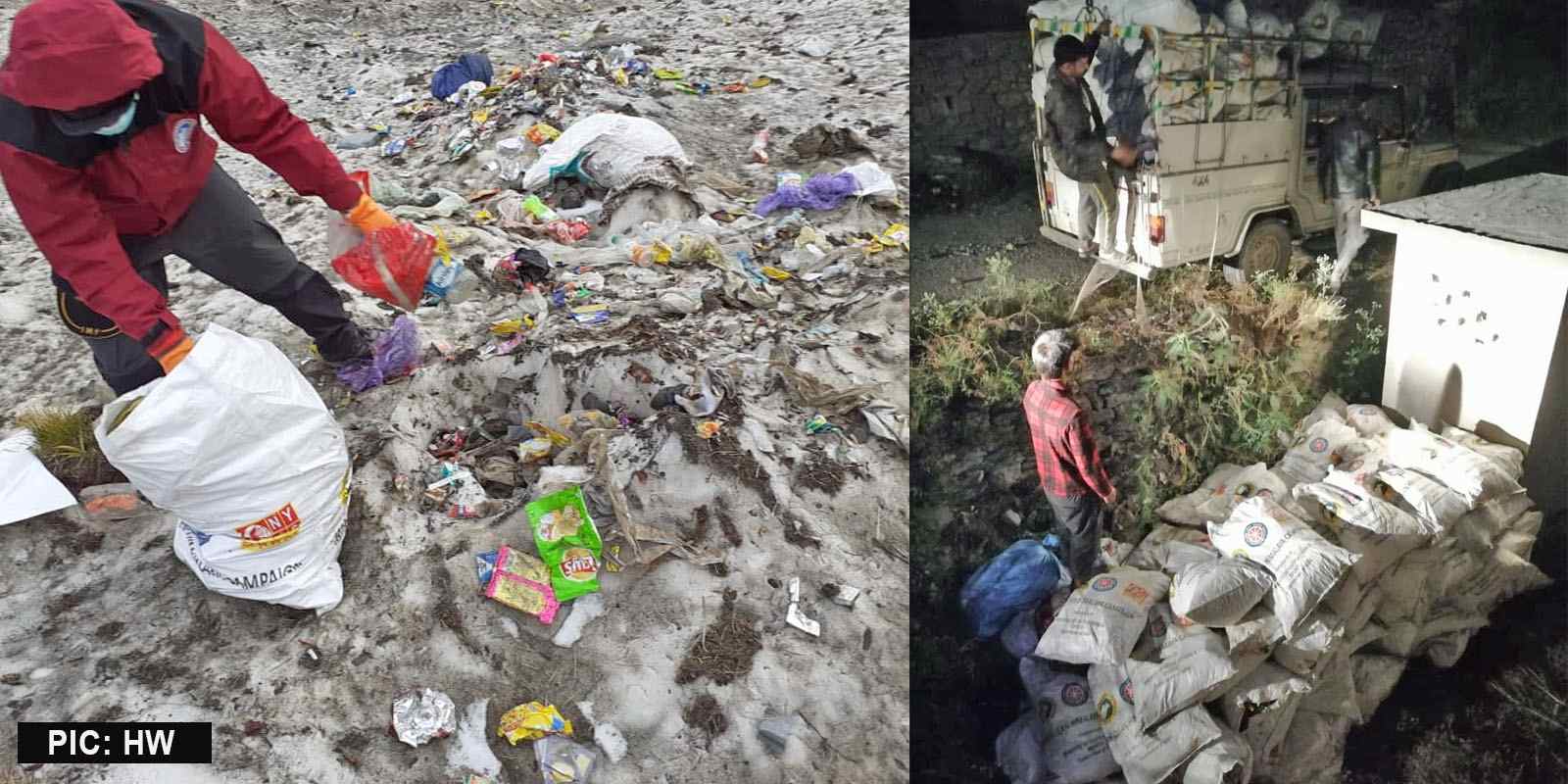 Kullu-During 2019 season, a local boy treks the holy shrine of Shrikhand Mahadev. Shrikhand is not only a holy place but is also a very beautiful and picturesque place at an altitude of 5300 metres.

Lalit Mohan had imagined the place to be green, clean and tranquil, which was the reason he had decided to trek it. Little did he know that the mountain was no longer the grand trail he had trekked years ago. He was shocked over what has become of this place. There was crowd everywhere and terraces had been cut over the campsites to accommodate numerous tents. Most of the water sources had dried up and remaining were badly polluted with plastic waste. He was surprised that the situation was the same even at the top, which is supposed to be the holy spot. A lot of offerings were made in plastic bags and glass bottles. 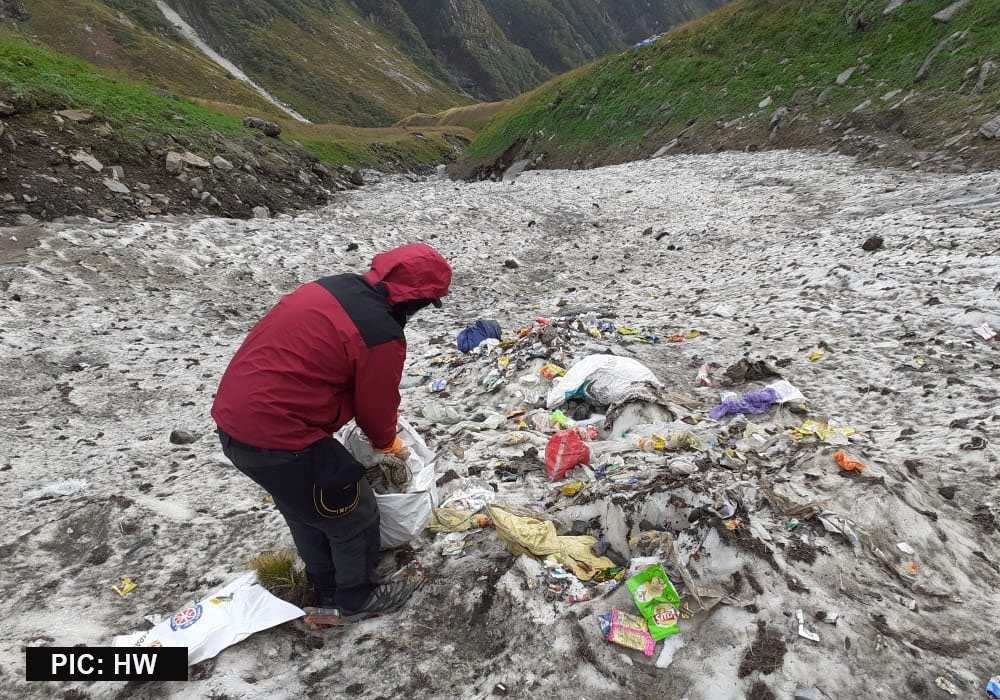 He returned to Delhi and wrote a letter to the Director of Indian Mountaineering Federation (IMF) for hosting a cleaning drive along the entire trek. With a positive response from the director IMF, Col. H.S. Chauhan, a cleaning drive expedition was planned by the IMF in collaboration with the Ministry of Youth Affairs and Sports and NSS. A team was formed that comprised of the members of the Indian Mountain Federation Lalit Kanwar, Praveen Dahiya, Hemant Sharma, Nikhil Chauhan and Rajat Jamwal. The team was led by Lalit Mohan. The expedition was flagged off by the SDM, Anni, Kullu district, on October 2, 2019.

The team got to work from the base campsite at Shingad and collected unethically disposed of garbage from the campsites at Brati Nala, Reyosh Thach, Khumba, Thathi Bheel, Thachru, Kali Ghati, Bhim Talai, Kungsha, Bhim Dwar, Parvati Bagh, Nain Sarovar and the Shrine on top. The garbage mostly comprised of remains of plastic sheets, bottles, wrappers, left-over food etc. 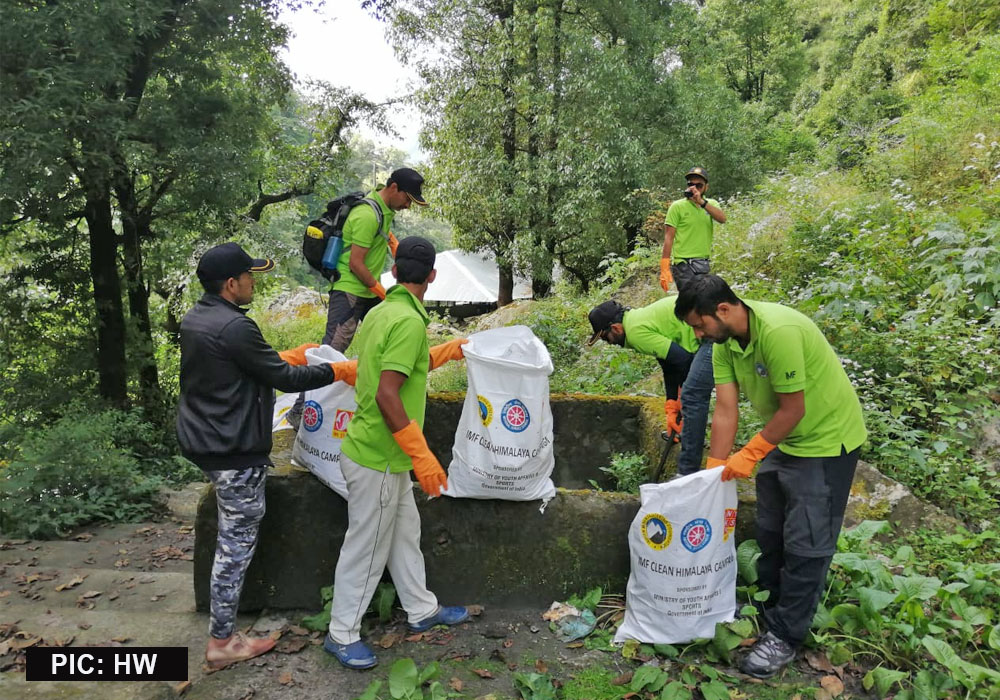 Two major reasons behind this widespread littering and unethical disposal of garbage are the public feasts (Bhandaras) and the pandals erected to host them. Moreover, there were around 700 private tents which were set up throughout the mountain. Also, these tents do not provide even temporary toilets and visitors relieve themselves in open wherever they can.

It is also important to note that the Kurpan stream, which flows through this valley, is the only snow-fed source of drinking water for many villages. 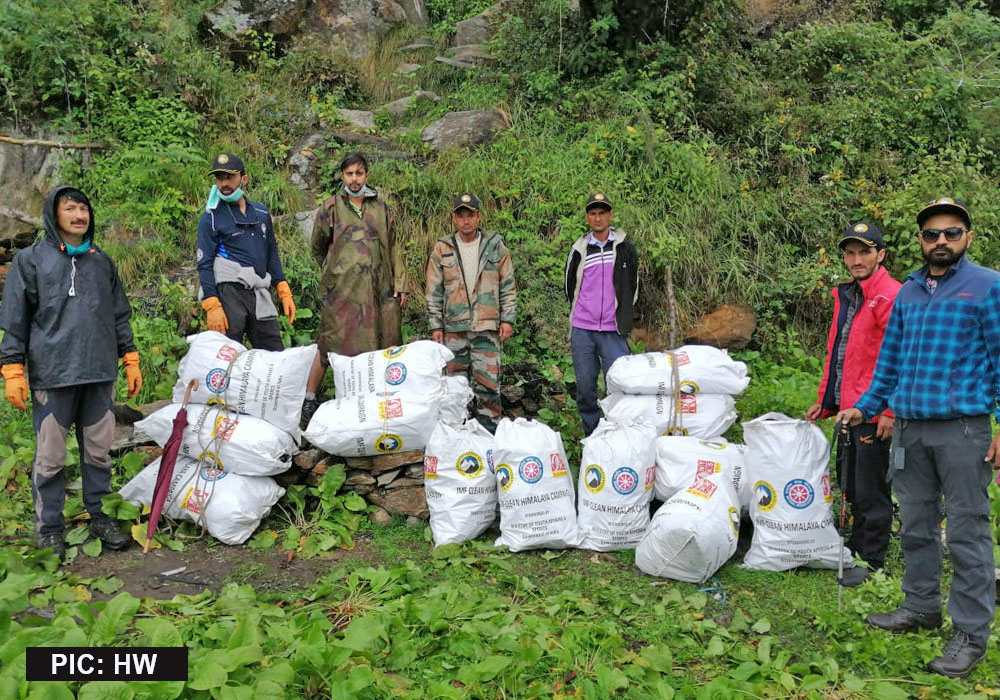 It appears that authorities responsible for granting permission for setting up campsites in this fragile environment did not pay any attention to prepare a proper plan for waste management. Most of the area falls in the reserve forest category, and it is surprising to see that according to the forest rules, no one can be granted permission to set up a campsite in a reserve forest area.

Strong religious sentiments are associated with the Shrine of Shrikhand Mahadev, but growing movement of visitors without proper management in such a fragile environment has its own side-effects. 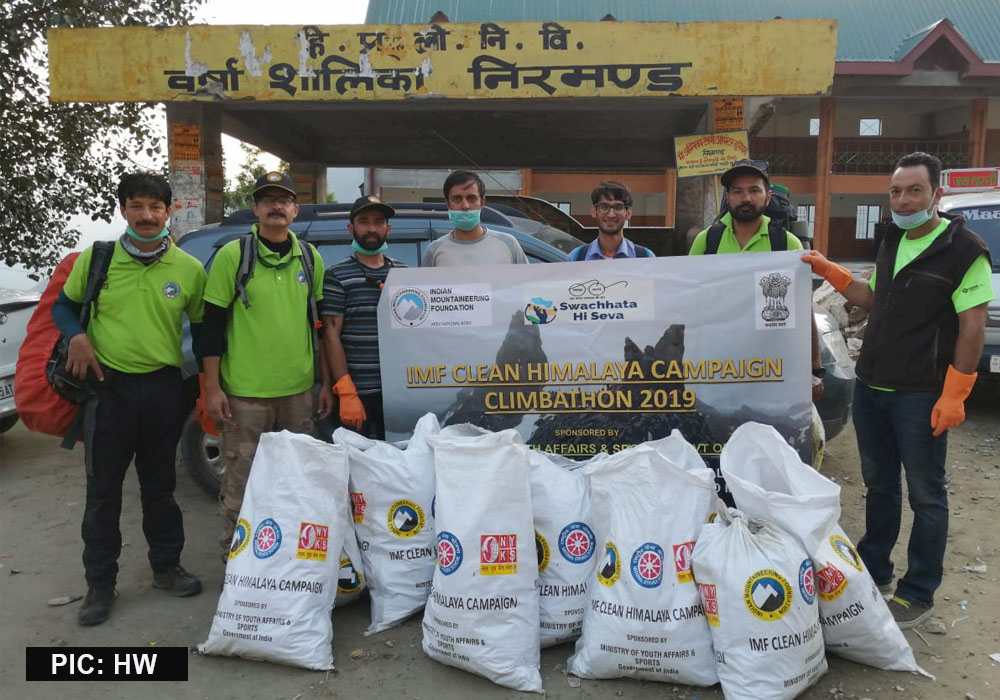 The team made their way to the top in minus 10 degrees temperature and was shocked to find plastic waste strewn over the glacier too. The team collected a total of 1900 kgs of garbage in about 170 sacks. The sacks were ferried down the mountain with the help of local people, who came ahead to support the team in its quest during the expedition. The team returned to Nirmand village on the October 14. The garbage was deposited with the Block Development officer at Nirmand. The team held meetings with schools students at Jaon and Bagipul villages to spread the message of conserving and protecting the environment and taking steps to maintain cleanliness in the mountains. 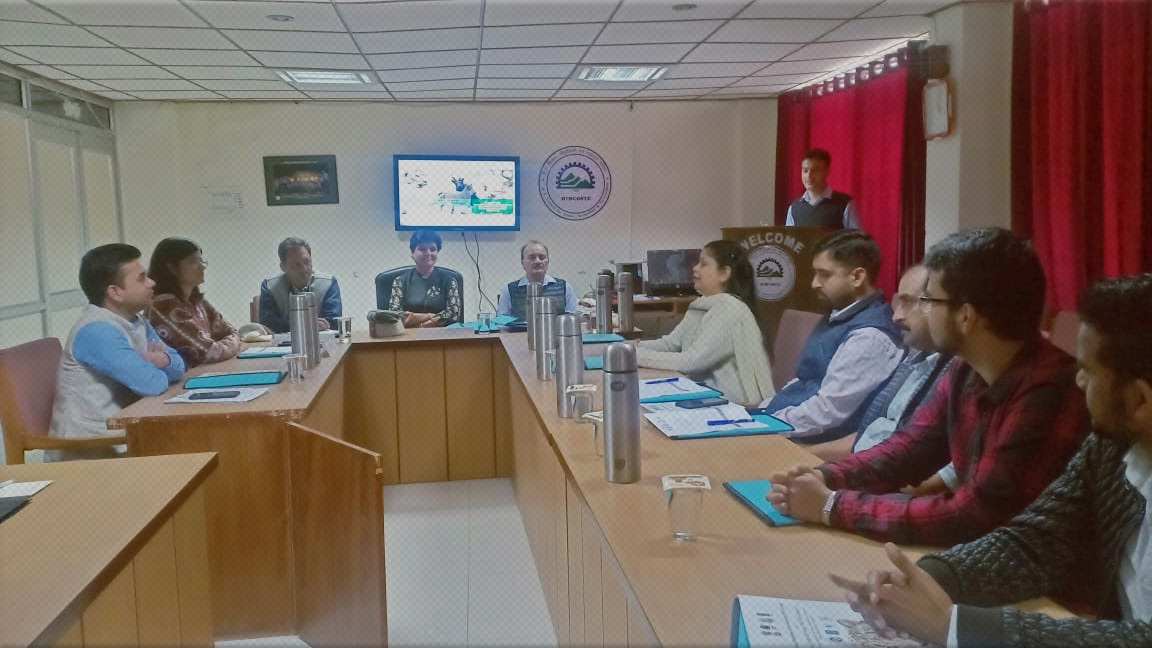 This program is being conducted in collaboration with HP Forest Department and State Biodiversity Board for Lahaul, Pangi and Kinnaur landscapes of the State. Under this program, selected youth would be trained for documentation of local biodiversity in the form of People’s Biodiversity Registers (PBRs).

Speaking on the inaugural function today, Dr Savita, PCCF (Wildlife) said that snow leopard is the iconic animal of high Himalayas. A good number of these apex predators denote a healthy ecosystem. To ensure the survival of these beautiful animals, sustainable use of forest resources and generation of alternative livelihood opportunities is pertinent.

The initial step to conserving local biodiversity is its documentation as Peoples Biodiversity Registers (PBRs). She lauded the efforts of ENVIS Hub in implementation of Green Skill Development Program (GSDP) last year and now training students in SECURE Project.

Dr Aparna Sharma, Coordinator, HP ENVIS Hub, informed that under this course, selected students would be imparted theoretical and practical knowledge by eminent experts in the fields of botany, zoology, forestry, wildlife, importance and conservation of Biodiversity, waste management, remote sensing & GIS. In association with State Biodiversity Board, field visits would be carried out to prominent Universities, Research Institutions and conservation areas of Himachal Pradesh for exposure to local flora, fauna and its documentation in PBRs.

A total of nine students have been selected for the training program: six from Pangi, two from Lahaul and one from Shimla. The best of trained youth would be involved in making PBRs in selected landscapes by the HP State Biodiversity Board.