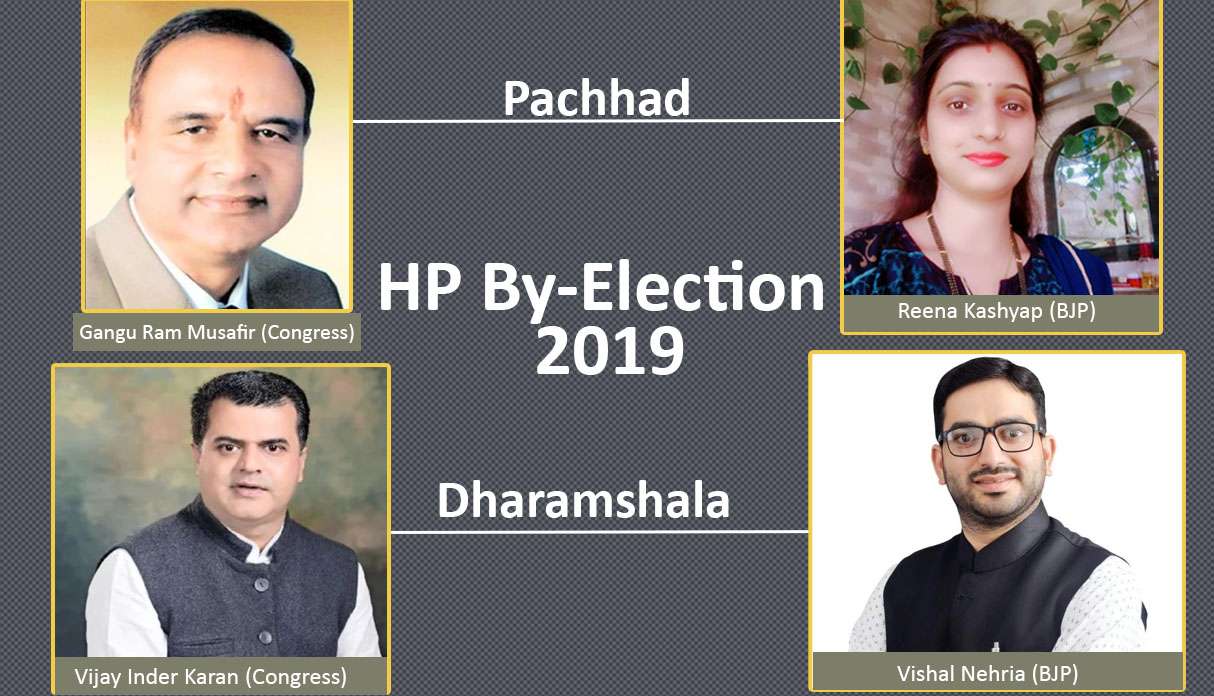 Shimla-Candidates for Himachal Pradesh by-election on Dharamshala and Pachhad constituency seat, which are scheduled to be held on October 21, 2019, have been announced by both Bharatiya Janata Party and Congress. While Congress had announced the names of its candidates on Saturday, BJP declared its candidate on Sunday.

For BJP, Vishal Nehria would be contesting elections on Dharamshala seat against Vijay Inder Karan of Congress. Both candidates are fighting their first assembly elections and both belong to Gaddi community.

Vishal Nehria is the state secretary of BJYM and Reena Kashyap was Zila Parishad member once. It would be first assembly elections for both BJP candidates.

On the other hand, Gangu Ram Musafir had won the Pachhad seat from 1982 to 2007 in a row. In the list of possible Congress candidates, Musafir was leading on Pachhad seat.

Candidates from both parties are expected to file their nominations on Monday.

On Dharamshala seat, however, Congress had to face an embarrassment after Sudhir Sharma, who was recommended by Congress to the high-command, refused to fight the elections. It became a matter of debate as to why there was such a huge communication gap between the party and Sudhir Sharma. It implied that either the party did not take him into confidence, or something went wrong at the last moment.

After Sudhir refused, Congress opted for Vijay Inder Kiran, who enjoys the patronage of GS Bali faction and the President of Youth Congress. He would also get the support of ant-Sudhir faction, who have been opposing him for past several years.

Sudhir Sharma has cited poor health as the cause behind his decision not to fight the election. It is not clear whether he would be campaigning or not. On the other hand, several BJP candidates, who were expecting ticket on Dharamshala seat, remained in unrest over speculations of Sudhir joining BJP. There has been a lot of infighting in BJP over the ticket on Dharamshala seat.

Both Congress candidates on Sunday visited the HPCC headquarters in Shimla to meet the President Kuldeep Singh Rathore.

Rathore made a call to party workers to unite to ensure the victory of its candidates. He asked the party workers to highlight issues like unemployment and economic slowdown under the rule of BJP. Congress is also expecting that the infighting in BJP would benefit Congress.

Congress also consider the declaration of its candidates prior to BJP as a lead in the election. Congress has asked the party workers to stay vigilant against BJP’s trickery, propaganda, and violation of Model Code of Conduct.

On the other hand, it would be a litmus test for Jairam Thakur as BJP is ruling the state for the last two years. While Jairam had begun campaigning for elections at the beginning of September, Congress is yet to start.

Further, both parties are yet to announce the list of their star campaigners for the by-elections.