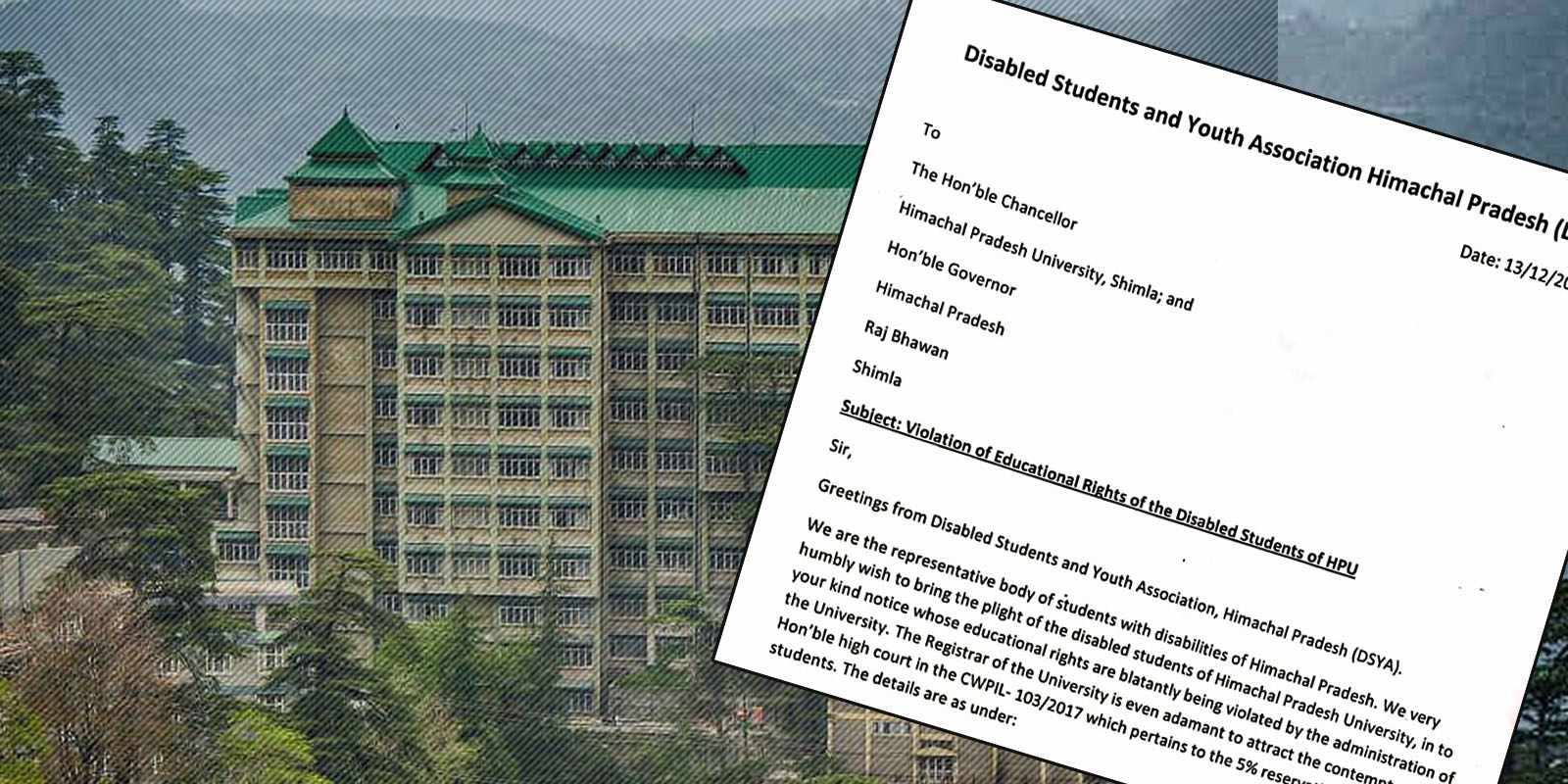 Shimla– It is not less than an embarrassment for the Himachal Pradesh Government and the HP University that even disabled students are compelled to fight for their rights. The apathy of the system is such that these students are not getting any relief despite orders of the State High Court to reserve no less than five percent seats for disabled at higher educational institutes.

This indifference toward such students is apparent from the fact that the accessible library for the disabled students of Himachal Pradesh University, which was inaugurated by Chief Minister Jairam Thakur on July 22, 2019, doesn’t even have a washroom and students, especially visually impaired girls, are facing difficulties. It was revealed by the disabled students of HPU in a memorandum submitted to the Governor and Chancellor, Bandaru Dattatreya, on December 13, 2019.

It is not shocking then that the Chief Minister inaugurated a library facility for the disabled students without basic facilities because it was merely a formality performed in response to an order of the State High Court passed in a PIL filed by a disabled student, Banita Rana, in 2014.

Victims of this apathy on part of HPU’s administrative officials, the Disabled Students and Youth Association (DSYA), Himachal Pradesh,  approached the Governor. The Association alleged that the HPU Administration is blatantly violating not only the educational rights of the disabled students but also not following the orders of the State High Court issued in November 2018.

Research Scholars, Mukesh Kumar and Saveena Jahan, Convener and Co-Convener of DSYA respectively, alleged that the Registrar, HPU, Ghanshyam Chand, disregarded orders of the court to reserve five percent seats for the disabled students during admissions. He went on with admissions for the session 2019-20 without implementing the order in any of the courses, they alleged. The disabled students were also not given this reservation while allotting hostel facility.

A visually impaired student, Indu Kumari, native of Chamba, had filed a PIL, while hearing this petition on November 5, 2018, the court had directed all institutions of higher education to reserve five percent seats for the disabled students.

“Therefore, we dispose of this petition by directing that all institutions of higher education and other higher educational institutions receiving aid from the government in the State of Himachal Pradesh, shall not only reserve not less than 5% seats for persons with benchmark disabilities but said reservation to the extent of 5% shall be provided each time when the institution initiates the process of admission to academic courses,”

the court had directed in its judgement.

The Registrar was also a party in the said PIL, despite that, the Association said, the Registrar is not afraid of attracting contempt of court by not implementing the order.

“This accessible library in its new shape was inaugurated by the Chief Minister Jai Ram Thakur on July 22, 2019. The disabled students who come to this section of the library are still deprived of the necessary equipment including talking software, Internet (LAN) connection, sufficient compute-chairs, tables, newspapers, e-journals of different subjects, periodicals, good quality heater and curtains on the windows,”

The Association also alleged that a budget to the tune of Rs 5 lakh, which was sanctioned and mandated to purchase talking software for visually impaired students, is about to laps since the Registrar did not make any purchase.

The Association also alleged that out of a total of 17 computers installed in the accessible library, only four computers are in working condition and have the necessary software installed.

The Association also complained that a Junior Office Assistant (JOA), who was appointed in the library to assist the blind and other visually impaired students, was transferred on September 24, 2019. Since the transfer, no replacement was provided and the library is without a JOA for the last three months.

The students alleged that the Registrar is not paying heed to the directions of the Vice-Chancellor as well.

The Association urged the Governor to look into the matter and protect the legal rights of the disabled students.

The Association also requested to provide a recourse room for the visually impaired students in the varsity where they can access reading devices, make recordings and books in Braille.