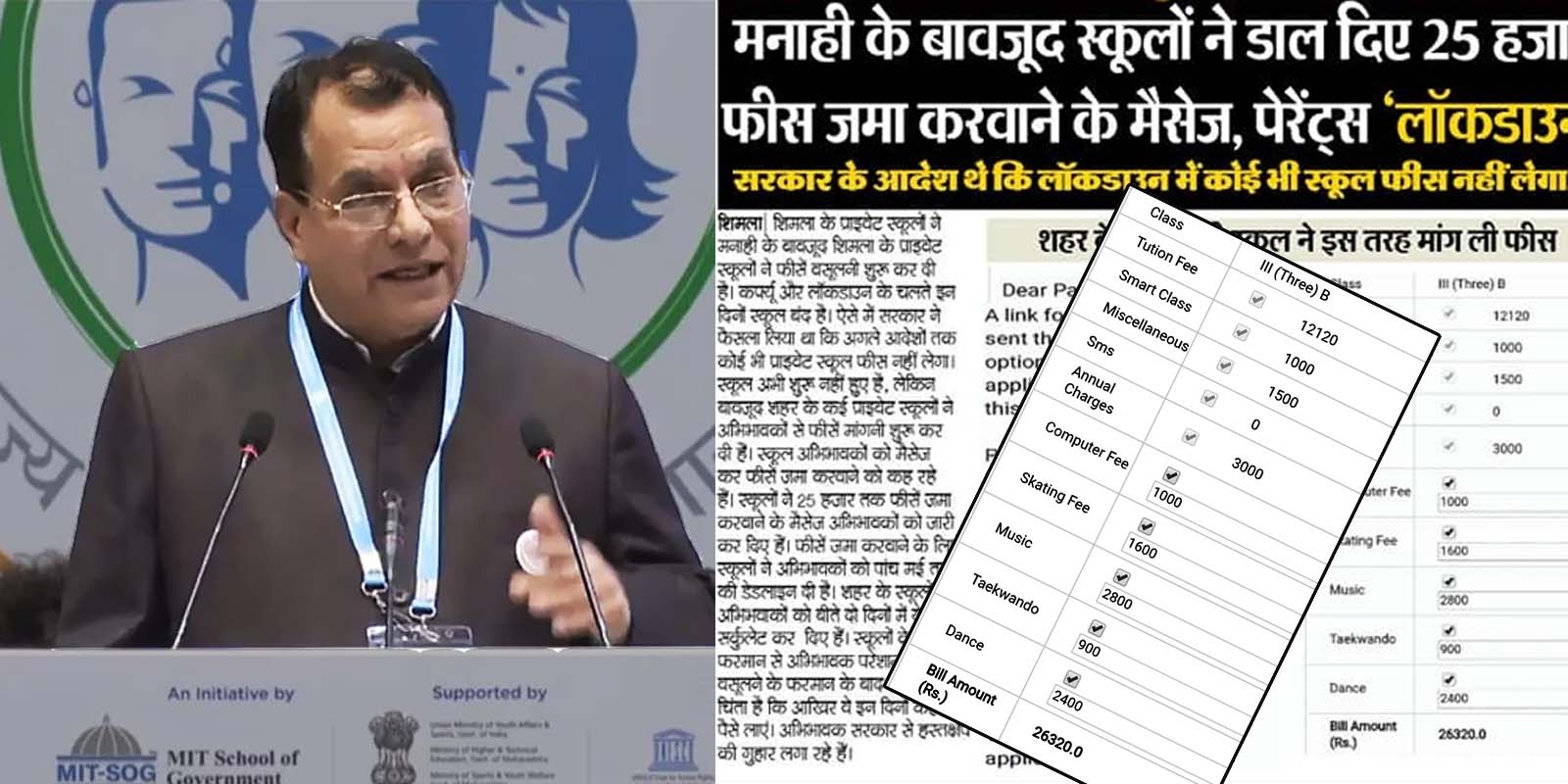 Shimla-On 27th March 2020, Suresh Bhardwaj, the Education Minister of Himachal Pradesh, had asked the private schools to stop compelling parents to deposit fees during the state-wide curfew and lockdown. He asked them to extend the last dates for depositing fees.

He had made this statement after the Director of Higher Education, Himachal Pradesh, Dr Amarjeet Sharma, confirmed that it has come to the notice of the department that some private schools functioning in the state had fixed the last date for submission of school fees as of March 30th, 2020.

But parent continued to and are still receiving receive messages from schools asking them to deposit the fees. Messages sent to parents said the “bill” should be paid by 5th May 2020. This bill amounts to over Rs 26,000 for three months.

The Student-Parent forum today wrote a letter to the Education Minister in which it said that on April 24, one of these schools sent messages to parents to pay the “bill” for March, April, and May months online. Earlier, in March, with a fee hike of eight percent, the school had sent a message for paying Rs. 19,000, the forum said. Now, the new message received on April 24 said that parents will have to pay about 26,000. This fee hike of 15 percent in addition to the previous hike of eight percent during such a crisis has bewildered the parents, the forum said.

Moreover, the forum expressed shock over the fact that these schools are also billing parents for activities/facilities skating, music, Taekwando, Dance, smart class etc. The schools are closed for a month now so some charges should not apply for this period.

The forum said that private schools have already made a hike of eight to twenty percent in their “bills”. Parents of about 70 percent children enrolled in Himachal’s 2712 private schools are employed as outsource workers, labourers, small-scale shopkeepers, taxi drivers, small businesses, hotel operators etc., the forum said.

Due to the lockdown, sources of income of these parents are badly hit. Paying hefty fees of schools during the lockdown has become a reason for distress for the parents, the forum said. No reason can justify hiking fees during such a time of crisis and compelling parents to pay their “bills” . Even though the government has asked them to extend the lasts dates for paying “school bills”, these schools are sending desperate messages.

If we rewind a little, we find that the Education Directorate has directed private schools as many as three times to not make any fee hikes without fulfilling certain conditions. First notification in this regard was issued on December 5, second on January 18, and third on March 12.

As per the forum, the schools were directed to not take decision on fee hike without conducting a general house. But the schools made fee hikes of upto 20 percent by defying this order. The Department did not take any action as always.  The Directorate had also ordered these schools to adjust excess fee charged during the last year in the bills of current year. Nothing was adjusted, the forum said.

The forum has raised question over the insensitivity of these schools which are indifferent to COVID-19 crisis and lockdown and financial problems majority of parents are facing currently. In its letter, the Student-Parent forum requested the Education Minister to intervene and implement the notifications issued by the Education Directorate.

By Saturday evening, what Education Minister could do is tell the parents that there is nothing that he could do about the messages being sent to parents to pay the “bills” but he could only save them from paying a penalty for delayed payment of fees.

The Disaster Management Act and Epidemic Act is in force, but the State Government doesn’t seem to be capable of giving even a slap on the wrist of such private schools. The question is; Is this the best that the Education Minister can do to regulate and tighten the noose around private schools blatantly defying its orders?