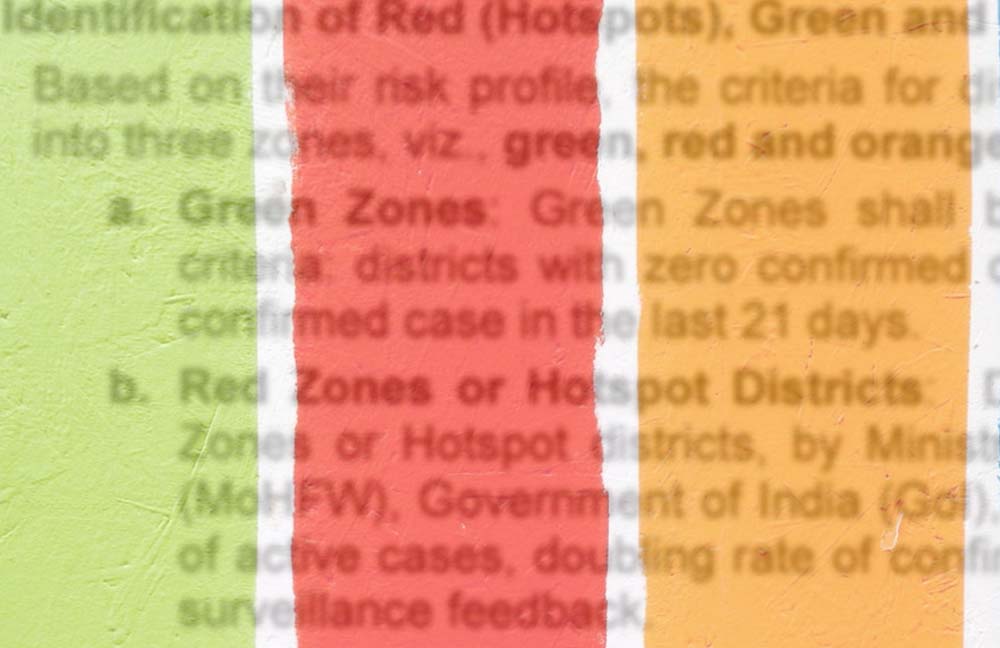 The criteria for identification of districts as Red, Green and Orange Zones have been spelt out in detail in the letter dated April 30, 2020, issued by Ministry of Health and Family Welfare (MoHFW), GoI.

The classification of districts as Red Zones will take into account the total number of active cases, doubling rate of confirmed cases, the extent of testing and surveillance feedback from the districts.

Those districts, which are neither defined as Red nor Green, will be classified as Orange zones.

Several districts of the country have, within their boundaries, one or more Municipal Corporations (MCs).  It has been observed that due to higher population density within the MCs, and consequent greater inter-mixing of people, the incidence of COVID-19 within the boundary of the MC(s) is higher than in the rest of the district.  In the new guidelines, therefore, it has been provided that such districts will be classified into two Zones, i.e., one Zone for the area under the boundary of the MC(s); and, another for the area falling outside the boundary of the MC(s).  If the area outside the boundary of the MC(s) has reported no case for the last 21 days, it will be allowed to be classified as one stage lower than the overall classification of the district as either Red or Orange.  Hence, this area will be classified as Orange, in case the district is overall Red; or as Green, in case the district is overall Orange.  This classification will enable more economic and other activities in that area of the district, which is relatively less affected by the incidence of COVID-19, while also ensuring that due caution continues to be exercised so that these areas remain free from COVID-19 cases.  This dispensation has been made only in respect of districts having Municipal Corporation (s).

The most sensitive areas of the country, from the spread of COVID-19 point of view, and falling within the Red and Orange Zones, are designated as Containment Zones.  These are areas where there is a significant risk of spread of the infection.  The containment areas would be defined by respective District Administrations, taking into account the total number of active cases, their geographical spread, and the need to have well-demarcated perimeters from the enforcement point of view.

The local authority will ensure 100% coverage of Aarogya Setu app among the residents of the Containment Zone. Containment Zones would have intensified surveillance protocols, with contact tracing, house to house surveillance, home/ institutional quarantining of persons based on their risk assessment, and clinical management.  Strict perimeter control would need to be ensured, so that there is no movement of people in and out of these Zones, except for medical emergencies, and for maintaining the supply of essential goods and services.  No other activity is permitted within the Containment Zones.