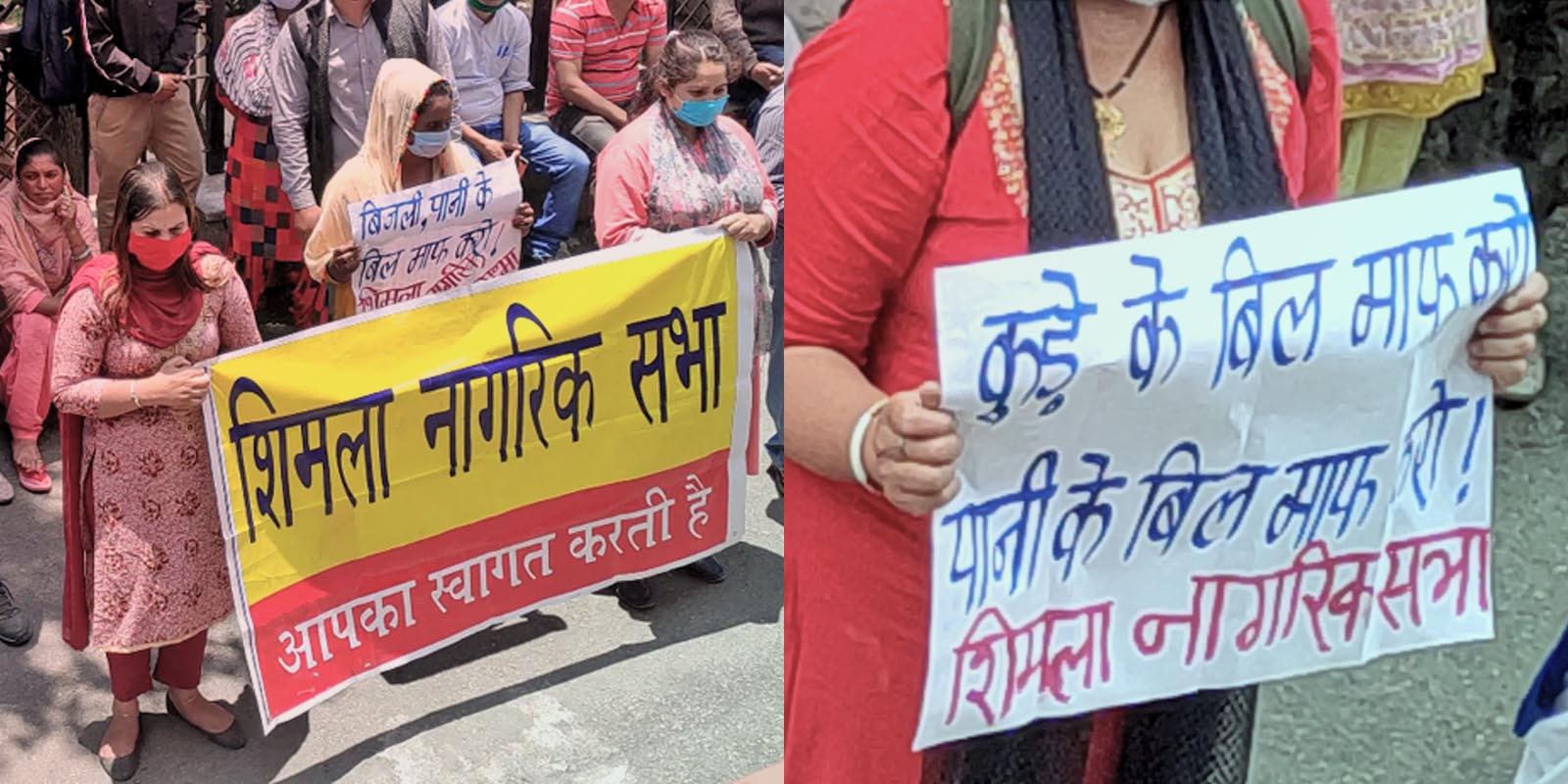 Shimla– Nagrik Sabha Shimla on Monday staged a protest near the Office of the Municipal Corporation, Shimla, over hefty bills of electricity, garbage, water, and problems of the businessmen. A delegation of this front approached the Commissioner, Shimla MC, and submitted a memorandum of their demands.

Citizens raised questions over the decisions of the state government to withdraw subsidy worth Rs. 80 crore on ration/food and subsidy worth 100 crores on electricity charges.  Questions were raised over the timings of these decisions  as a large section of the population, especially the poor and lower-middle-class families, are struggling to survive  amid COVID-19 crisis.

The Sabha said that nearly 70 percent of people employed in the private sector in the State have lost their employment partially or completely due to the corona pandemic. Over 5000 workers have lost jobs as hotels, restaurants, and commercial establishments remain closed in the State or not doing well even after the opening of lockdown. In Shimla, 40 percent of employment is linked to the tourism industry, the Sabha said. Closure of the industry has rendered thousands of porters/coolies, cab drivers, guides, those working with tours & travel agencies etc., unemployed. The livelihood of street vendors, hawkers, is hit adversely, the Sabha said.

It also alleged that while people are struggling to just survive this crisis, they have been slapped with hefty bills by State Government, Shimla MC, and Electricity Board. These people were expecting relief but the government became indifferent to their financial crisis.

To worsen things, these people are getting mentally harassed after receiving warnings of disconnection on non-payment of bills on time.

Citizens also complained that bills which were earlier issued monthly, have been issued collectively for four months and a little time has been given to deposit these bills. The meter reading rate for four months has increased manifold, they said.

Similarly, bills worth thousands of rupees for garbage collection have been issued. Businessmen and commercial building owners are also being asked to deposit property tax amid this financial crisis.

The state government should waive off electricity, garbage, and water bills for March, April, May, and June months, the Sabha demanded. It warned of more protests if no relief was provided to the affected.

Citizens had also been complaining about hefty bills despite the fact that businesses like Paying Guest facilities are closed since March and there is no garbage to collect. But still, PG owners said, they have been slapped with hefty bills.

Further, former Mayor of Shimla, Sanjay Chauhan, targeted the Centre Government and top leadership of the Bharatiya Janata Party. He referred to the hellish struggle of migrant laborers to reach their homes and their struggle to remain alive because of the imposition of curfew/lockdown in a haste without any warning.

He also termed the ‘Rs 20 lakh crores relief package’ announced by the Centre government a mere gimmick. He said the Prime Minister and the Finance Minister kept elaborating this relief for about a week, but when it came to allocation, it had nothing for the common people. He alleged reliefs were given to influential and rich while commoners and marginal businesses got nothing. He also pointed out that prices of diesel have become equivalent to those of petrol.

He also said that instead of the relief package, the Centre should have given 10 kg ration per month and deposit Rs 7500 in the accounts of those who do not fall under income tax limit. He said this demand was raised several times during the lockdown. There were several other issues that Chauhan raised while addressing the protestors. (Watch Video).

Though the protest was being staged in front of the Office of Superintendent of Police, Shimla, and several police personal were present on the site, social distancing was hardly maintained.