Shimla-Himachal Pradesh’s tally of COVID-19 cases is fast heading towards the 2000 mark as the number, as well as, the rate of appearance of new cases is on the rise. In the last two days, the state has reported 170 cases from different districts. While 61 cases were reported on Wednesday including 23 from Shimla district, 109 more persons tested positive on Thursday.

Solan (43) and Siramur (42) continuou to report a high-load of cases. In Solan, 41 cases were reported from the Baddi-Barotiwala-Nalagarh area including over a dozen of contacts of previously infected workers of Wrigley factory.

In Sirmaur, the coronavirus has tightened its grip on Govindgarh (mohalla) locality as 25 more people tested positive on Thursday. Remaining cases were reported from other parts of the district.

So far, a total of 124683 persons have been tested in the state since the beginning of the outbreak.

The Additional Chief Secretary(Health) RD Dhiman had on Wednesday claimed that the spread of coronavirus is under control in the state. He also claimed that there is no threat of community spread and the state is doing much better than other states. The spike in the cases was temporary he had told media. He attributed the spurt in cases to migrant workers, a marriage ceremony in Nahan’s Govindgarh locality, and movement of armed police forces. He also claimed that the state has a high testing rate (17,000/million) and a lower death rate (0.84%). 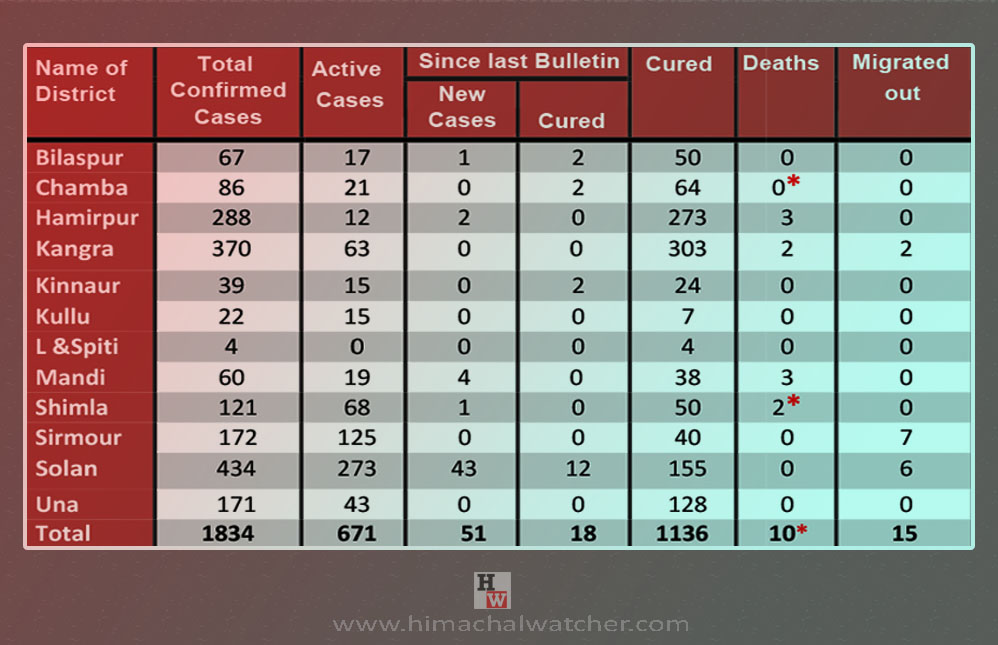 Himachal: Penalty of Rs. 500 – Rs 5000 for Not Wearing Mask or Wearing it Improperly

Ban on Transfers in Himachal, No Entry to HP Secretariat Without Pass