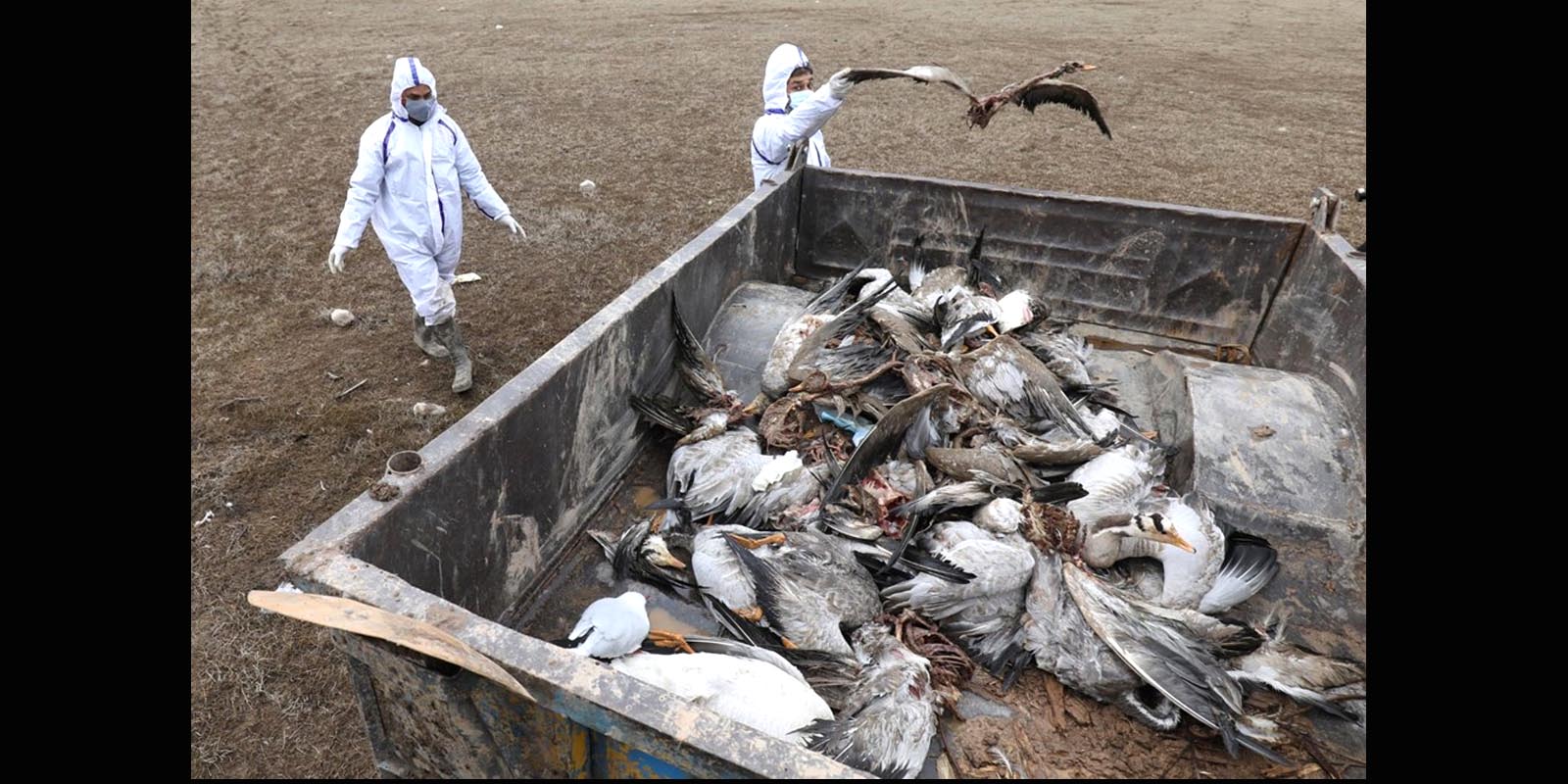 Shimla-Rising count of dead migratory birds in Himachal Pradesh due to an outbreak of “bird flu” is keeping the Horticulture and Wildlife Departments on their toes. The cause of deaths at the Pong Dam Sanctuary was H5N1 Avian Influenza virus, informed the Wildlife Wing of the State Forest Department on Wednesday. Samples of dead birds were sent to NIHASD Bhopal, it was informed.

The tally for Migratory bird deaths in Himachal Pradesh has crossed the 31,000 mark. Till January 5, this number was 2736 for the Pong Dam Wildlife Sanctuary alone. Some deaths of migratory birds have been reported from around Govind Sagar lake in Bilaspur district. About 90 percent of these deaths include Bar-Headed Gees, which migrate to Pong Dam wetlands from Siberia and Mongolia every year. These birds are known for their capability to sustain long flights at very high altitudes ranging from 5000 to 6000 meters above sea level, especially while crossing the Himalayan range. Other than that, some crows have also been found dead in some areas. But the reason of death was yet to be ascertained.

According to the Department, it was on 28 December 2020 that the field staff of Dhameta Range had first reported sudden deaths of four Bar-Headed Geese and one Common Teal in Fatehpur area.

The Wildlife Wing said that it was working actively to contain this outbreak of “bird-flu” and the field staff has been directed to maintain strict vigil and active surveillance on the situation.

“Rapid Response Teams have been constituted and deployed for collection and safe disposal of dead birds as per protocol. The infected areas are being disinfected and sanitized. The whole operation is being supervised by DFO Wildlife Hamirpur,”

informed a spokesperson of the Forest Department.

The outbreak of the flu in and around Pong Dam Sanctuary has promoted the government to ban fishing and livestock activity within an area of one kilometre from the lake’s periphery. An alert has been sounded within a radius of 10 km from the periphery of the lake. Also, commercial activity relating to poultry, birds, and fish has prohibited in Fatehpur, Dehra, Jawali and Indora subdivision of Kangra district.

The outbreak is haunting poultry farmers and those dealing in chicken and egg sales and export to markets. Poultry farmers fear that the outbreak would cause losses worth crores as the winter season is the peak season for their business. In case bird flu is reported in poultry farms, thousands of birds would have to be culled to prevent further spread, resulting in losses to these farmers. According to people involved in poultry and fishing, the demand has already fallen drastically after the news regarding the outbreak of the flu broke out.

The Animal Husbandry Department has sent 119 samples of poultry birds from areas around the Dam to the Regional Disease Diagnostic Laboratory in Jalandhar. The results of the tests were still awaited. Deputy Director, Animal Husbandry, Dr Sanjeev Dhiman informed that so far no case of bird flu has been reported among poultry birds.

The measures suggested by the Union Government to the affected States to contain the disease and prevent further spread as per the Action Plan on Avian Influenza include strengthening the biosecurity of poultry farms, disinfection of affected areas, proper disposal of dead birds/carcasses, timely collection and submission of samples for confirmation and further surveillance, intensification of surveillance plan as well as the general guidelines for the prevention of disease spread from affected birds to poultry and human. Coordination with the forest department for reporting any unusual mortality of birds was also suggested to the States. The other states were also requested to keep a vigil on any unusual mortality amongst birds and to report immediately to take necessary measures.

Avian Influenza (AI) viruses have been circulating worldwide for centuries with four known major outbreaks recorded in the last century. India notified the first outbreak of avian influenza in 2006. Though the Government of India denies that the bird flu is only zoonotic, according the World Health Organization, there has been cases of infection in humans too.

“As of 10 December 2020, a total of 1,568 laboratory confirmed human infections with avian influenza A(H7N9) virus have been reported to WHO since early
2013. Among them, 33 cases were infected with HPAI A(H7N9) virus, which have mutations in the hemagglutinin gene indicating a change to high pathogenicity in poultry. No increased transmissibility or virulence of the virus within human cases has been detected related to the HPAI A(H7N9) virus.”

“Almost all cases of H5N1 infection in people have been associated with close contact with infected live or dead birds, or H5N1-contaminated environments. The virus does not infect humans easily, and spread from person to person appears to be unusual. There is no evidence that the disease can be spread to people through properly prepared and thoroughly cooked food,”

According to Centre for Disease Control And Prevention,

“Rare human infections with some avian viruses have occurred most often after unprotected contact with infected birds or surfaces contaminated with avian influenza viruses. However, some infections have been identified where direct contact was not known to have occurred. Illness in people has ranged from mild to severe.”

“Because of the possibility that avian influenza A viruses could change and gain the ability to spread easily between people, monitoring for human infection and person-to-person spread is extremely important for public health.”

Implementing management practices that incorporate bio security principles, personal hygiene, and cleaning and disinfection protocols, as well as cooking and processing standards, are effective means of controlling the spread of the AI viruses.

In India, the disease spreads mainly by migratory birds coming into India during winter months i.e. from September – October to February – March. The secondary spread by human handling (through fomites) cannot be ruled out.