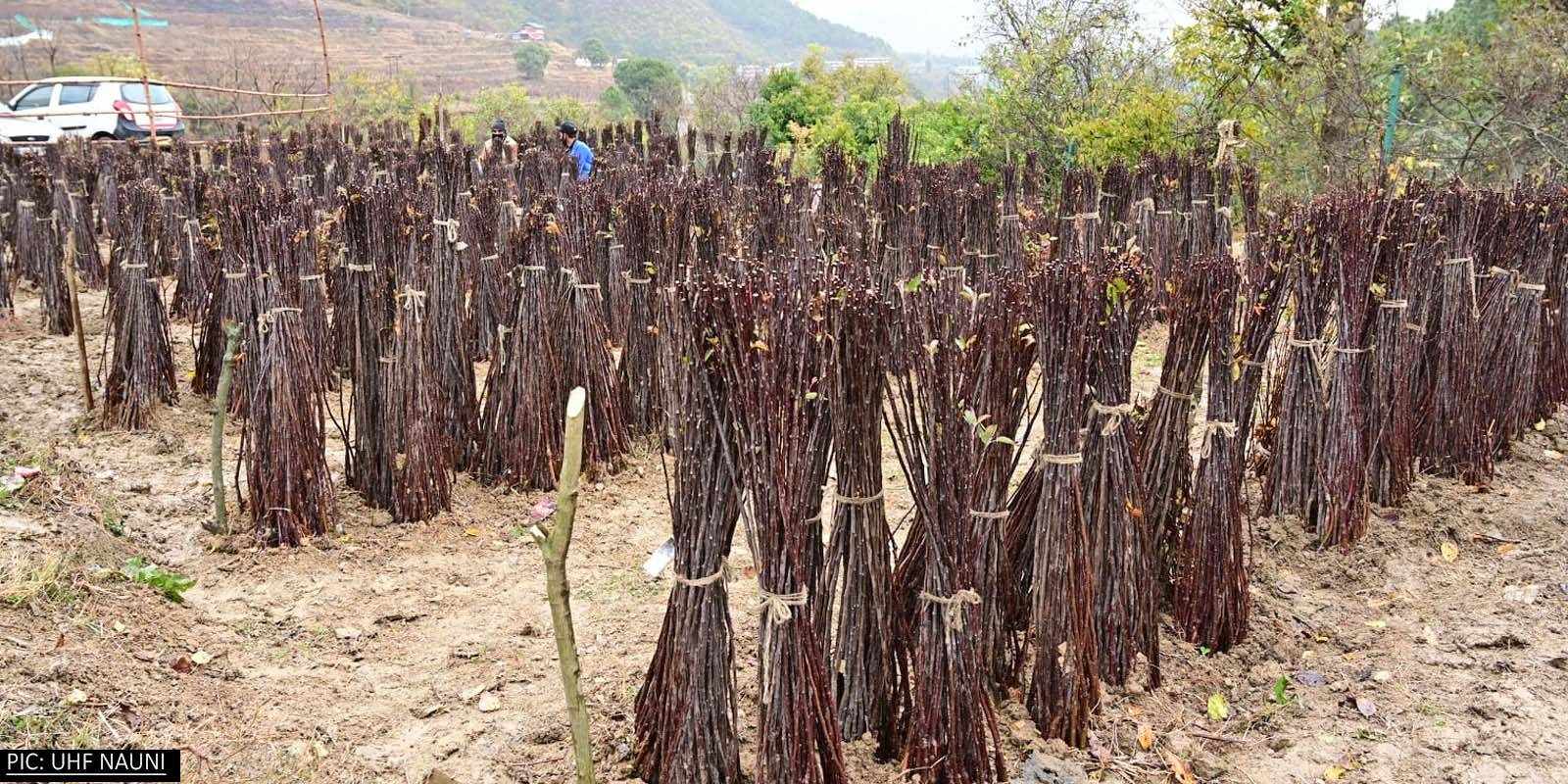 Solan-The restrictions imposed to prevent the spread of COVID 19 have not affected the annual sale of planting material prepared by Dr. YS Parmar University of Horticulture and Forestry (UHF), Nauni. Despite the restrictions on large gathering, over 90,000 temperate fruit plants have been sold to over 2,500 farmers from the four university nurseries in Nauni and Kandaghat.

This year, the university started the annual sale of planting material from 5th January in a staggered manner by limiting the number of farmers who were allotted plants on any given day ensuring strict compliance with the COVID 19 guidelines. The allotment list of the farmers who had applied for plants by filling the online demand form within the stipulated date was uploaded on the university website. This list mentioned the number of allotted plants along with the date, time and name of the university nursery from where these plants could be collected.

Owing to its high quality, the planting material prepared by the university sees a huge demand among the farmers of the state and the many parts of the country. This year, apple varieties like Jeromine, Red Velox, Scarlett Spur, Granny Smith and Gala Group were among the varieties which were popular among the farmers. Continuing with the trend, the demand for various stone fruits also witnessed an increase along with demand for apple plants from the lower regions.

On Saturday, Dr Parvinder Kaushal, UHF Vice-Chancellor chaired a meeting of the Seed and Planting Cell of the university. It was decided during the meeting that as the university has already provided plants to a majority of the farmers who had filled the demand form, the remaining plants will be open for sale for all farmers. The sale of the remaining planting material of select varieties of apple, pomegranate, plum, pear, peach, apricot, walnut, fig, etc will be open to everyone from 18th January. The farmers have been advised to confirm the availability of the desired variety of fruit plants from the nursery before visiting.

In addition to the planting material provided by the university nurseries in Nauni and Kandaghat, the regional stations/ KVK of the university at Mashobra, Bajaura, Reckong Peo, Rohru, Tabo, and Chamba also supply temperate plants to the growers at different dates. 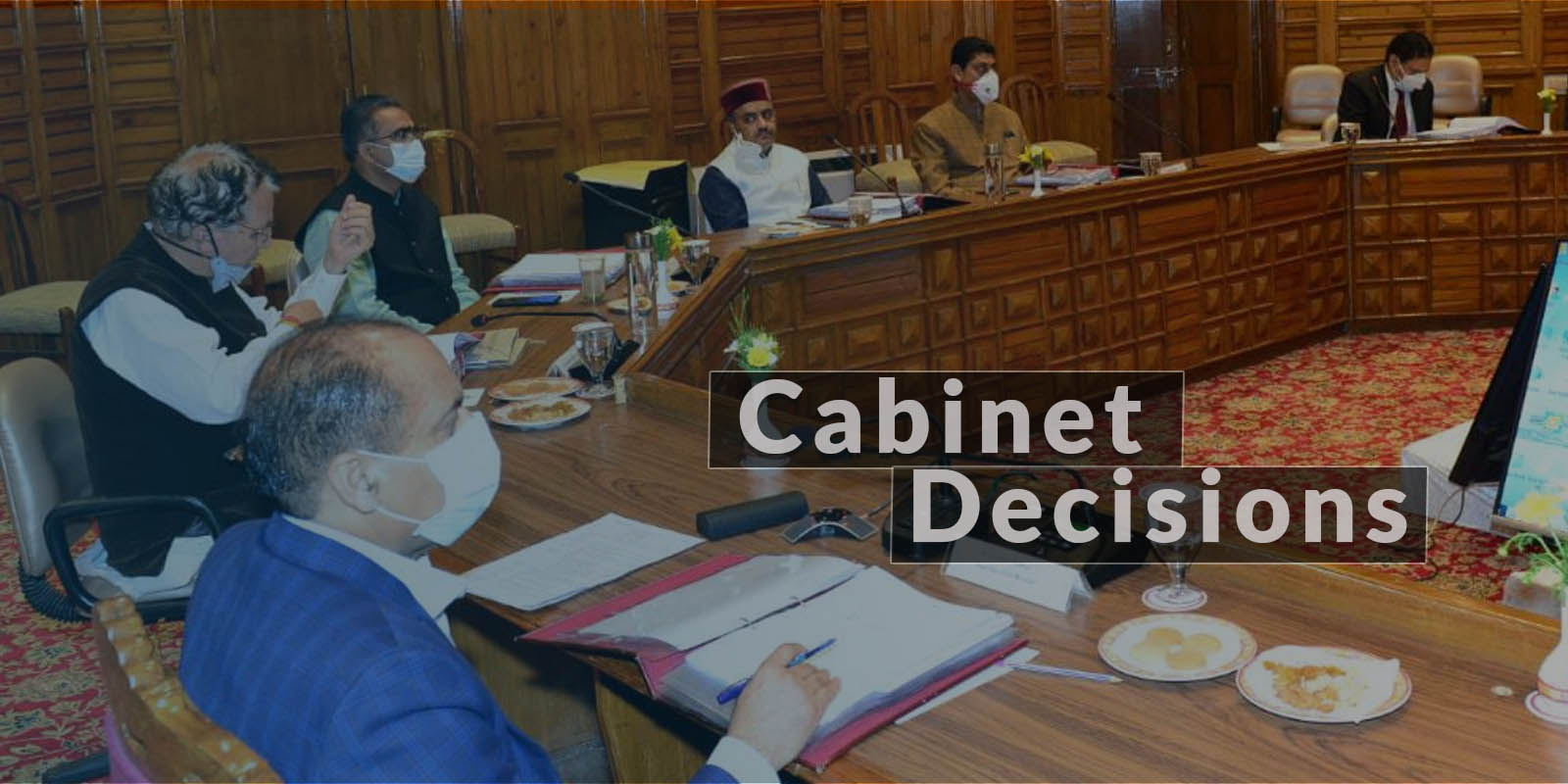 Shimla-Himachal Pradesh Cabinet today allowed more relaxations in the corona curfew imposed in the state. The state government has increased the timing for opening shops. From June 14 onwards, shops in Himachal would remain open from 9 am to 5 pm. All shops would be allowed to open except on Saturday and Sunday.

Intrastate public transport would be allowed with 50 percent occupancy. Section 144 lifted and no requirement of RTPCR tests for entering in the State. Corona curfew to continue from 5pm to 5am.

The offices, which were operating with 30% staff, would also open with 50% and 75% capacity. All the medical colleges, ayurvedic colleges and dental colleges would remain open from 23rd June. Pharmacy and nursing schools to open from 28th June.

No relaxation was given in restrictions on the number of people allowed to attend marriages, which is currently 20. The temples would also remain closed.

The Stage Carriage, Taxi, Maxi, Autorickshaw and Institution Buses would be given the relief of 50 percent on payment of Special Road Tax and Token from 1st August 2020 to 31st March, 2021.  The Transport sector would get relief of about Rs. 20 crore due to this decision.

It also decided to provide 50 percent relief on Special Road Tax and Token Tax during the period of three months from 1st April, 2021 to 30th June 2021.  This decision would provide relief of Rs. 8 crores to stage carriages, taxis, maxi, autorickshaws, contract carriage buses and institution buses.

The Cabinet directed the Jal Shakti Department to go ahead for filling up 2322 posts of different categories under the Departmental Para Workers Policy to effectively manage 486 drinking water and 31 irrigation schemes in the State.

It also decided to fill up

The Cabinet gave its nod to revised scheme for Interest Subvention on Working Capital Loan for Hospitality. The revised scheme provides for interest subversion of 75percent in first year and payment period has also been increased to five years. Some other categories like ropeway and travel agents have also been included in the new scheme.

The Cabinet gave its approval to make necessary amendments in Mukhya Mantri Swalamban Yojna 2019 to include Service enterprises and related goods carriers that can be combined as composite related activities. It also envisages increasing the maximum investment ceiling of Rs. 60 lakh in plant and machinery with total cost project not exceeding Rs. 100 lakh in place of existing Rs. 40 lakh and Rs. 60 lakh respectively. It also allowed an increasing interest subsidy of five percent on loan amount upto Rs. 60 lakh instead of Rs. 40 lakh. This would facilitate youth to take maximum benefits from this Yojna.

The Cabinet decided to take over the Saraswati Sanskrit Degree College Dangar, tehsil Ghumarwin of Bilaspur district under government control.

The Cabinet decided to enhance the honorarium of all the categories of teachers appointed under SMC by Rs. 500 per month from 1st April 2021. 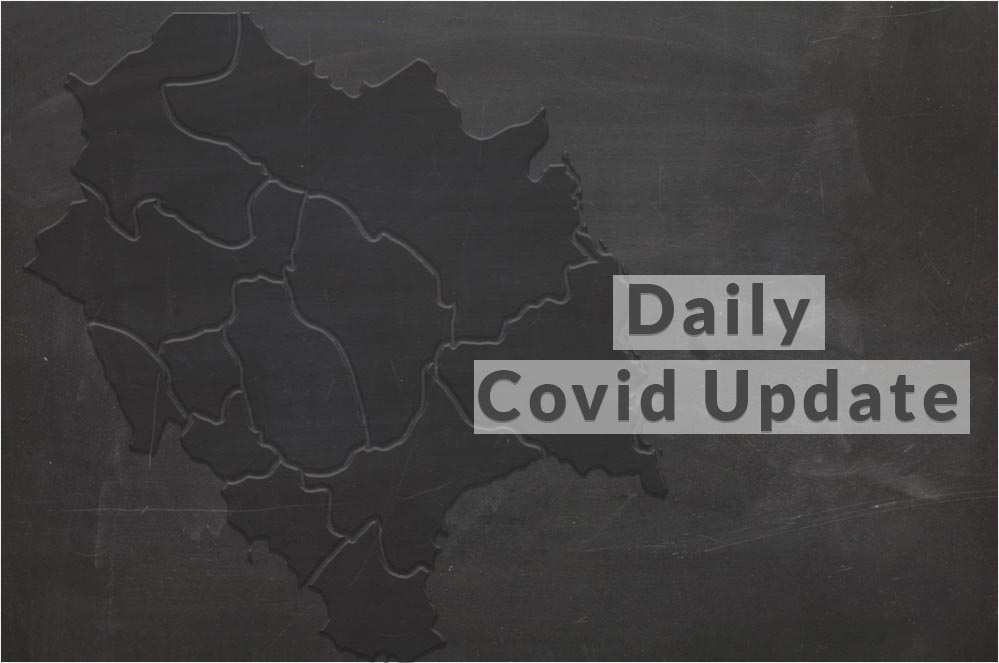 Shimla-Though number of daily Covid cases in Himachal Pradesh remains low, the fatality numbers are still in two digits. On Wednesday, according to the state health department, the state reported 554 new case and 15 fatalities. Further, the government has issued schedule for vaccination of persons in various categories.  The state government said it would no more procure vaccine for 18-44 years age group as the Centre had revised the guidelines for the vaccination policy. View more details below. 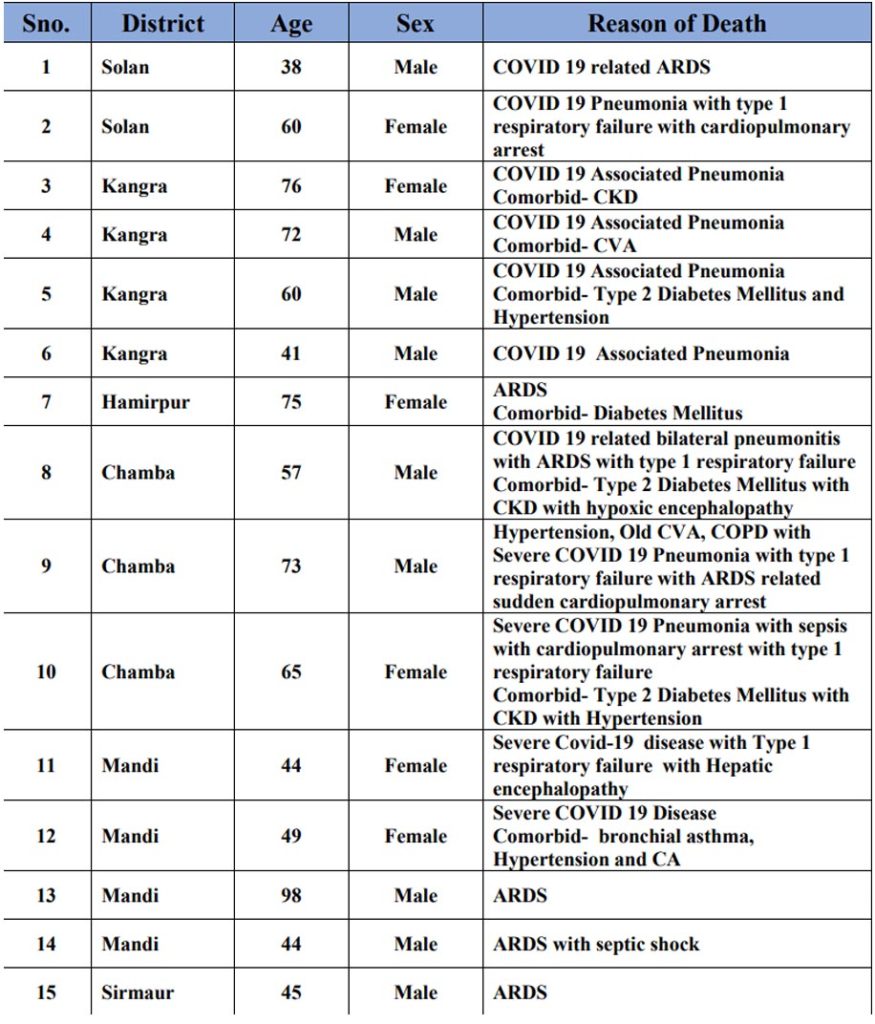 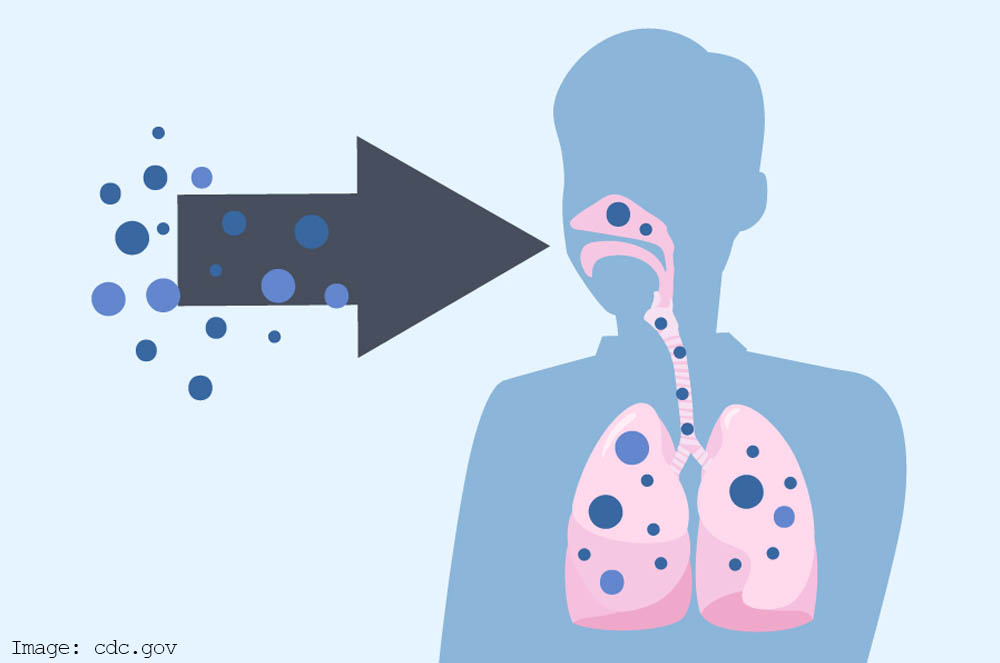 Shimla-So far Himachal Pradesh has recorded 17 cases of Covid-19 Associated Mucormycosis (CAM), which is also called black fungus infection. Of these cases, seven patients belong to District Kangra, while Shimla and Solan’s districts have reported two cases each. One case was reported from Mandi and five from Hamirpur. These are official statistics available based on the entries made by the Districts/Institution Incharges on the Covid-19 portal of India.

So far, four of these patients with CAM have died in the State.

The government of India has issued an advisory on the treatment and management of CAM.

Use of a clean mask even in the home environment, appropriate dose and duration of steroids use, proper sugar control in patients with Covid-19 can reduce the incidence of CAM. Also early diagnosis and appropriate management by multidisciplinary team of doctors can lead to better outcomes in this disease, the advisory said.

Further, the National Task Force on Covid-19 has reviewed the treatment of Covid-19 Associated Mucormycosis and has given recommendations on the various treatment options. As per the task force Amphotericin B, both in the Amphotericin lipid complex/liposomal and Amphotericin B Deoxycholate forms, is equally efficacious for treatment of CAM cases. However, the latter is more toxic to the kidneys and therefore should be administered along with monitoring of kidneys’ functions and electrolyte imbalance, the advisory said.

The joint task force has also recommended that injection Posaconazole can be used in cases of Non-availability of Amphotericin B or in those patients having severe intolerance to Amphotericin B.

An appeal has been made to create awareness among the people about the symptoms of CAM and post Covid-19 consultations with an eye specialist, ear nose throat specialist, neuro surgeons and dentists should be undertaken, if required.

Intellectual Property Rights and Global Access to the Covid-19 Vaccine