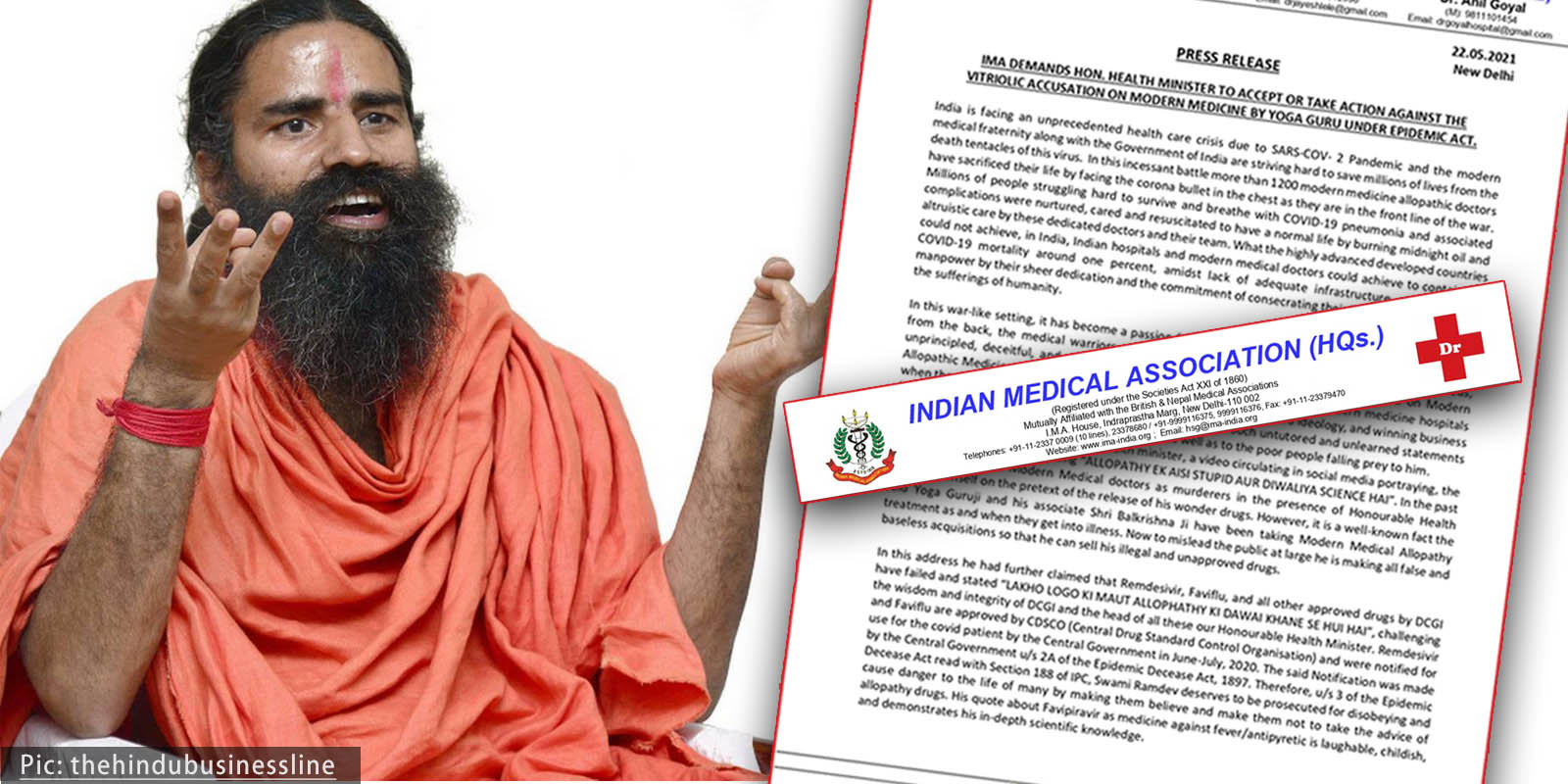 New Delhi: Indian Medical Association on Saturday demanded the Union Health Ministry to prosecute and book Baba Ramdev under the epidemic act for misleading the country against Allopathic medicine for the treatment of Covid-19. The association alleged that the Yoga Guru’s statement is aimed to take advantage of the situation and create a false sense of fear and frustration among the public.

The Association also slammed him for discrediting the sacrifice of the health staff who have died while fighting Covid-19.

“In this incessant battle, more than 1200 modern medicine allopathic doctors have sacrificed their life by facing the corona bullet in the chest as they are in the front line of the war,” the IMA said.

Swami Ramdev deserves to be prosecuted for disobeying and causing danger to the life of many by making them believe not to take the advice of allopathic doctors, the association demanded.

“Such untutored and unlearned statements are a threat to the literate society of the country as well as to the poor people falling prey to him,” the apex doctors’ body said in a statement.

Besides being an internationally adorned Yoga Guru, he is a corporate giant of a pharmaceutical unit and has made several false acquisitions about his company products time and again to mislead the public, the association pointed out.

When such idolized personal are making vitriolic comments, questioning the authority and integrity of the whole architecture of health ministry, the ministry should prosecute the person and book him under the epidemic act to save millions of people from such unscientific utterances, it argued.

“India is facing an unprecedented health care crisis due to SARS-CoV- 2 Pandemic and the modern medical fraternity along with the Government of India are striving hard to save millions of lives from the death tentacles of this virus.

In this incessant battle, more than 1200 modern medicine allopathic doctors have sacrificed their life by facing the corona bullet in the chest as they are in the front line of the war. Millions of people struggling hard to survive and breathe with COVID-19 pneumonia and associated complications were nurtured, cared and resuscitated to have a normal life by burning midnight oil and altruistic care by these dedicated doctors and their team. What the highly advanced developed countries could not achieve, in India, Indian hospitals and modern medical doctors could achieve to contain the COVID-19 mortality around one percent, amidst lack of adequate infrastructure, materials, and manpower by their sheer dedication and the commitment of consecrating their life and skills to alleviate the sufferings of humanity.

In this war-like setting, it has become a passion for people with malicious opportunistic attitude to hit from the back, the medical warriors with their selfish malevolent to boost up their unscrupulous, unprincipled, deceitful, and unpatriotic business fortunes. They pretend to throw mud on Modern Allopathic Medicine, but time and again benefitted through back door in Modern medicine hospitals when they get the disease Taking people for ransom, selling them weird ideology, and winning business by defaming scientific medicine are unpardonable offenses. Such untutored and unlearned statements are a threat to the literate society of the country as well as to the poor people falling prey to him. IMA brings to the notice of our Hon. Health minister, a video circulating in social media portraying, the celebrated Yoga guruji addressing “ALLOPATHY EK AISI STUPID AUR DIWALIYA SCIENCE HAI”. In the past too, he has uttered Modern Medical doctors as murderers in the presence of Honourable Health Minister himself on the pretext of the release of his wonder drugs. However, it is a well-known fact the said Yoga Guruji and his associate Shri Balkrishna Ji have been taking Modern Medical Allopathy treatment as and when they get into illness. Now to mislead the public at large he is making all false and baseless acquisitions so that he can sell his illegal and unapproved drugs.

In this address he had further claimed that Remdesivir, Faviflu, and all other approved drugs by DCGI have failed and stated “LAKHO LOGO KI MAUT ALLOPHATHY KI DAWAI KHANE SE HUI HAI”, challenging the wisdom and integrity of DCGI and the head of all these our Honourable Health Minister. Remdesivir and Faviflu are approved by CDSCO (Central Drug Standard Control Organisation) and were notified for use for the covid patient by the Central Government in June-July, 2020. The said Notification was made by the Central Government u/s 2A of the Epidemic Decease Act, 1897. Therefore, u/s 3 of the Epidemic Decease Act read with Section 188 of IPC, Swami Ramdev deserves to be prosecuted for disobeying and cause danger to the life of many by making them believe and make them not to take the advice of allopathy drugs. His quote about Favipiravir as medicine against fever/antipyretic is laughable, childish, and demonstrates his in-depth scientific knowledge.

Besides being an internationally adorned Yogaguru, he is a corporate giant of a pharmaceutical unit and has made several false acquisitions about his company products time and again to mislead the public.

The controversies on Coronil and Swasari are well-known facts to all, and the criminal complaint in Muzaffarour court by social worker Tamanna Hashmi for misleading and putting to risk the lives of a large number of people is proof to his misadventures.

The time-tested scientific icons of India ICMR, AIIMS, DCGG and Ministry of Health guidelines and diktat are challenged by a revered individual with a vested interest will make the gullible public to believe it and forego due treatment resulting in mass devastation in this pandemic. Is it not anti-national?

The supreme court in its wisdom has pronounced various judgements on oxygen therapy, and ensured the availability of Remedisivir and a worshipped person questioning that will it not amount to contempt of court?

All this is done by Swami Ramdev Ji to take advantage of the situation and create a false sense of fear and frustrations within the public at large so that he can sell his illegal and unapproved so-called medicines and make money at the cost of the public at large.

Enough is enough. With the pain and agony of loss of 1200 Modern medicine doctors, amidst limited infrastructure and manpower, the majority of Modern medicine doctors are working in the frontline with a sense of compassion. When such idolized personal are making vitriolic comments, questioning the authority and integrity of the whole architecture of health ministry, the Hon Health Minister who himself is a practicing Modern Medicine allopathic postgraduate and head of this ministry, should either accept the challenge and accusation of this gentleman and dissolve the modern medical facility or boldly face and prosecute the person for his words of arson on the sovereignty of the country and book him under the epidemic act to save millions of people from such unscientific utterances. The daughter should feel safe at the lap of her father, so much so the modern medicine in the headship of Modern medicine doctor. If he remains a mute spectator to this whole vandalism, who is going to bell the cat.

IMA demands and resolves if the Hon Minister is not taking Suo moto action, we will be forced to resort to democratic means of struggle to propagate the truth to the common man and knock the doors of the judiciary to get due to justice.