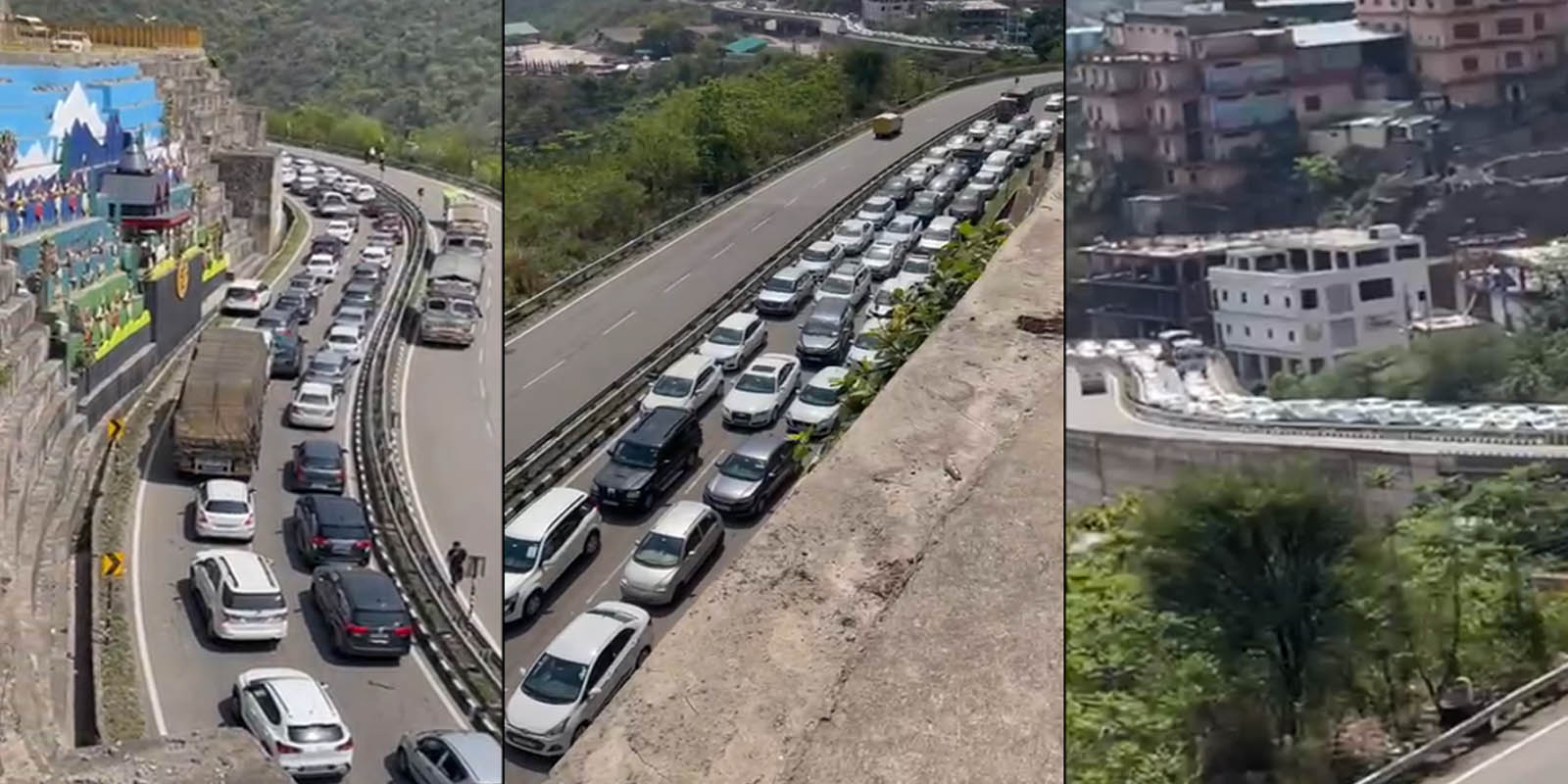 Shimla-RT-PCR report to enter in Himachal Pradesh is no longer a condition for visitors. As soon as the HP Cabinet announced this decision in its last meeting, tourists from neighbouring states started booking hotels in Himachal in advance. The decision cheered the hospitality industry which has borne huge losses as two peak sessions were washed off due to lockdowns and Covid related restrictions. But, at the same time, the rest of the public is in panic, especially after watching a video showing over one kilometer of traffic queues at the Parwanoo border on Sunday – a day before new guidelines came into force. A large number of these tourists had no idea about the date from which the new rules would come into effect and did not carry an RT-PCR negative report or registered on e-Covid portal. According to the police, they were asked to return as the new rules were applicable from 14 June onwards.

#Viral Video shows traffic congestion on Shimla-Kalka NH near Parwanoo after #HPGovt lifts restrictions on entry into #HimachalPradesh for tourists. While it's a relief for tourism industry, it also raises concerns ahead of warning of the third wave.#ThirdWave #Travel #Shimla pic.twitter.com/6nYuVT5cbR

The video was shared by mainstream media too, expressing shock over the desperation of people to enter the state to get respite from scorching heat in neighboring states.

Except for the hoteliers and stakeholders in the tourism industry, the scene appeared nothing less than a nightmare considering repeated warnings issued by the government itself over the third wave of the Coronavirus pandemic. The government’s advance warning about the possibility that children might be more vulnerable during the third wave is creating more panic. After witnessing the rampage of the second wave in the state, this scene shook them. Most people were against removing the mandatory condition of furnishing an RT-PCR report for visitors. Others said this crowd of tourists would fuel the third wave and the devastation that it would bring with it. Some said “tourists are not welcomed”, others commented, “hills are not calling, stay away tourists”.

There were suggestions for the government to at least arrange rapid testing of visitors at the entry points. Questions were asked over government’s mechanism to ensure safety against spread of infection.

The video created a stir in the state and the HP government had to issue a statement on Monday. In its statement, the government assured the people that the entry of tourists would be monitored through the e-covid pass portal. The visitors would still have to register on the portal and obtain a pass, which would be scanned at the entry points at borders.

However, hoteliers and the public questioned the relevance of the e-covid pass when tourists are not required to present a Covid negative report. In simple words, it is not possible to ascertain whether a particular visitor is infected or not. They argued that the e-covid pass did not fulfil any purpose and only leading to long traffic jams as police is supposed to scan these passes at designated entry points. If there is no purpose of scanning e-passes, then how would it help to protect the state from a further spread of infection?

At the same time, hoteliers and others involved with the hospitality industry directly or indirectly, are hopeful that the remaining pint of this peak tourist season would provide them with some relief. The state of the popular Indian Coffee House, which is on the verge of closure, is an apparent evidence of the hit that the industry has taken.

The decision of the government came under pressure from the industry. The stakeholders’ associations approached Chief Minister with a request to let them have the remaining peak seasons as the state government didn’t provide any relief. Because no relief was provided, the industry has no other way but to ask the government to lift Covid related restrictions on visitors. Moreover, the industry isn’t sure how long this remaining peak season would last as monsoon has already arrived in the state on July 13.

In May, Mohinder Seth, President of, Tourism Industry Stake Holders Association had written to the government explaining the plight of those employed with the industry.

He had said that hoteliers and businessmen involved in the hospitality industry did not receive any relief from the government and managed their units/services by spending from savings or by raising loans.

The units had somehow managed to pay salaries and other expenses for the April month, the association said, but expressed inability to do so for the May month as the working capital has dropped to zero, Seth said.

Today, a delegation of the Hotel and Restaurant Association of Northern India (HRANI) – a Northern outfit of the Federation of Hotel & Restaurant Associations of India-approached the Chief Minister and requested relief for the industry, which is the hardest hit due to the restrictions and struggles to survive.

The government might have lifted the restrictions, but it appears to be clueless about the management of the crowd and influx of visitors. The government numbers on entry of tourists into the state are also in question. According to a report published in an English Daily,

“As many as 7,201 persons entered Himachal yesterday on 2,787 e-passes but the Shimla police claimed that 5,000 vehicles arrived in Shimla.”

The report further said,  “If this is the case, then either the police, manning the entry points, is being liberal in allowing vehicles without an e-pass or some other routes are being used by tourists.”

This brings us to the lack of any robust mechanism or strategy to balance the management of tourist influx and prevention against the spread of infection.

Chief Minister Jairam Thakur-led government is again facing heat over its contentious decisions which appear to be devoid of any vision. Earlier too, Chief Minister has been alleged of being incapable to take decisions related to the interests of the state at his own.