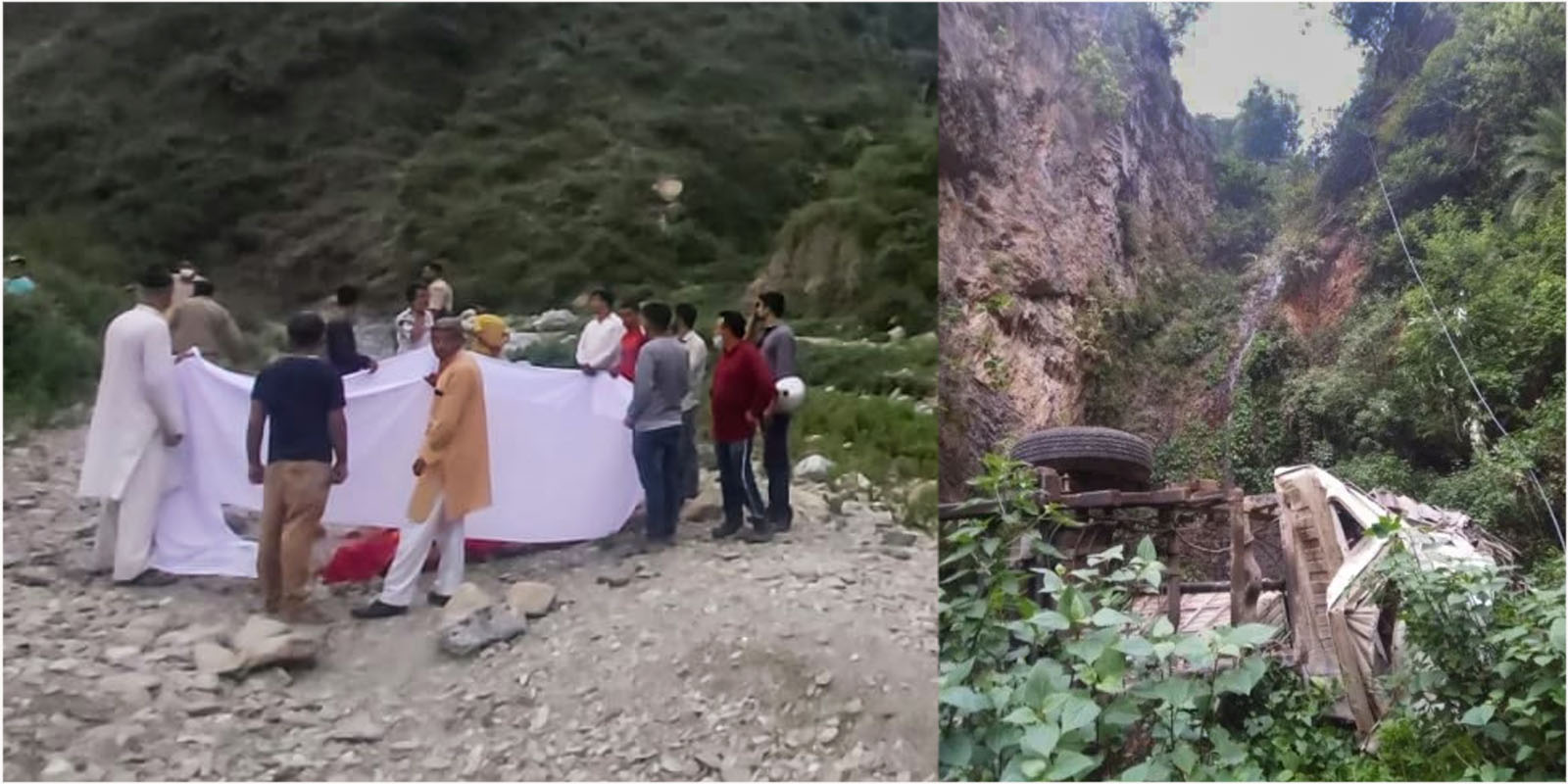 Sirmaur- Chadeau village in Shillai sub-division, Sirmaur district, plunged into grief as it lost eight villagers in a fatal accident that killed a total of 10 people on Monday. Today, a 21-year-old youth succumbed to injuries, taking the death toll to 11. One of the patients is still battling for his life at the PGI, Chandigarh.

Bali Ram -one of the villagers lost two young sons aged 17 and 19 years, which has left him heartbroken, and no words of comfort seemed to console him for this loss. The victims were mostly youth and included a 12-year-old too.

The overloaded pick-up truck that fell into a 250-300 meters deep gorge in Pashog on Timbi-Millah road was the part of a marriage party (baraat) that was returning to Chadeau from Bhatudi village with the bride. The vehicle lost control near Pashog, but the actual cause was yet to be ascertained. The accident was so ghastly that nine persons were killed on the spot. The injured were rushed to Paonta Sahib hospital.

It was the cruellest of turn-arounds for the family of the groom. For the family members, who had begun their morning with preparations to welcome the bride, the day ended up amid mourning screams in the village. The accident also killed a cousin of the groom.

On Tuesday, all the eight victims from Chadeau village were cremated together.

The government has announced a relief of Rs. 2 lakhs to the families of each victim and Rs. 50 thousand to injured. The Deputy Commissioner, Sirmaur, Ram Kumar Gautam, has ordered an inquiry into the incident.

While the cause of the accident is yet to be ascertained, the spot where the accident took place was said to be prone to accidents. Accidents at this spot have been reported earlier too. The road is narrow and in poor condition. There are no roadside safety measures (crash barriers/parapets).

“The accident should be investigated. Steps should be taken to avert such accidents in the future,” said Kuldeep Tanwar, in charge of the Sirmuar (CPIM) party committee, in a media statement.

“The spot where the accident occurred is vulnerable to accidents. According to my knowledge, accidents, including a bus and a car, have been reported at the same spot in the past too,” Tanwar added.

The party had brought the matter relating to poor condition and vulnerability to accidents to the attention of the government earlier too. The government was asked to broaden the road and install crash barriers. But the attitude of the government, the HP PWD, and elected representatives of the people remain indifferent towards it,” Tanwar further said.

The party has also demanded employment to at least one member of families who has lost the only breadwinner in this accident.

Considering the fact that the government was made aware of the poor condition of the road and vulnerability of the spot for road accidents, it would not be wrong to state that insensitivity and lack of will on the part of the state government and elected local representatives do have a part to play in this tragedy.

Also, the track record of the governments has mostly been disappointing when it came to roads in the rural areas of Himachal Pradesh. Very recently, the Ministry of Rural Development, Government of India, has ranked the state very low on the index assessing performances of the states in repairing roads. Himachal is one of the states which failed to spend the funds issued by the Centre for the works related to roads.

No Delta Plus Case in Himachal So Far, Mortality Rate Doubles in Second Wave