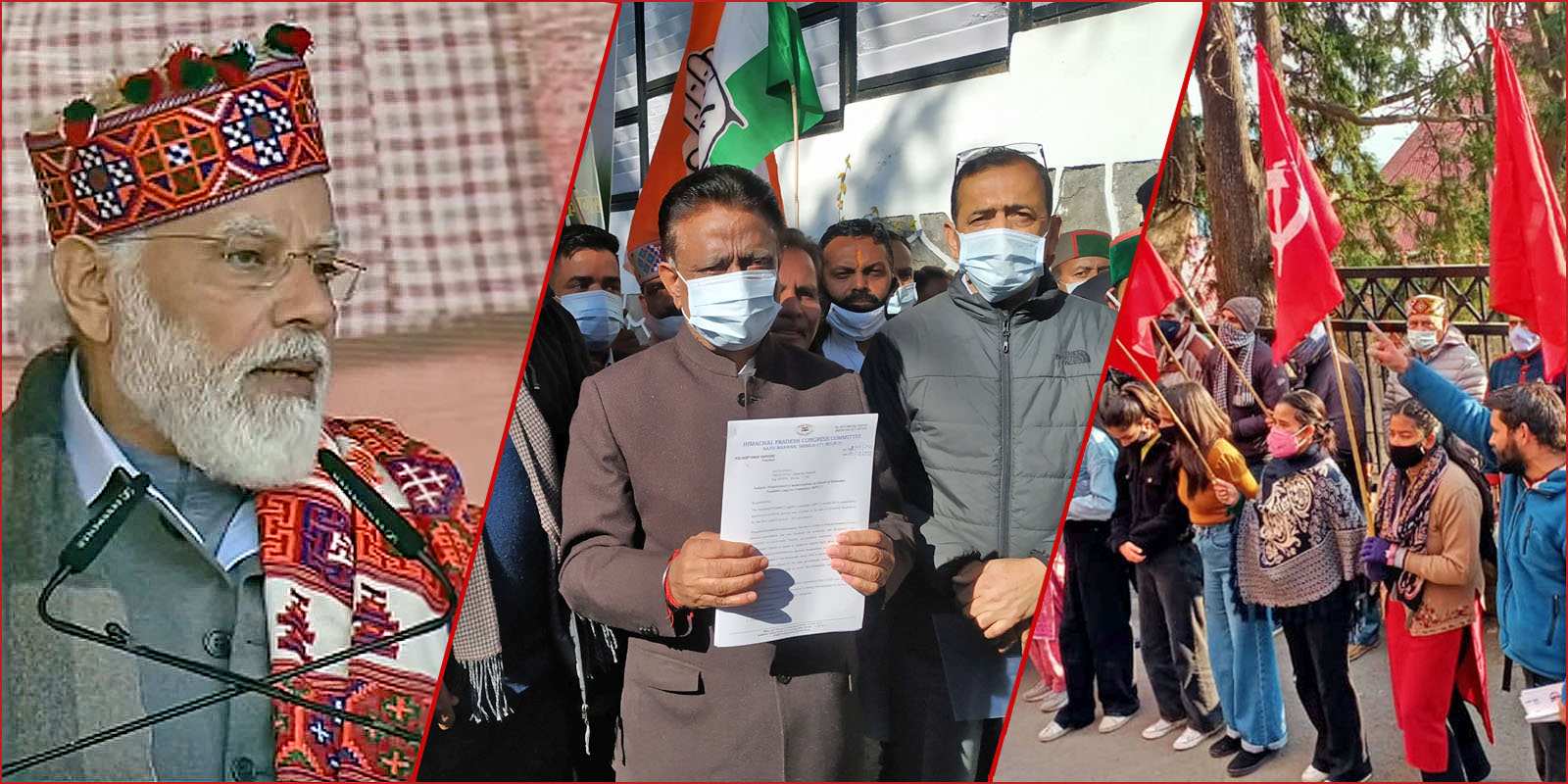 Mandi-Prime Minister Narender Modi today addressed a rally at the Paddal ground in Mandi. The occasion was to celebrate what Chief Minister Jairam Thakur claimed to be the “successful completion of four years of the government.”

A special emphasis was laid on creating a feeling of emotional proximity of the Prime Minister to Himachal Pradesh.

The event was organized to be a grand one with huge expenditure on its publicity, which the opposition Congress termed to be an extravagance in the use of public money  to show-off political power.

However, the defeat on all three Assembly seats and one Lok Sabha seat in the recently held bye-elections contradicts the government’s claim that the public is satisfied with the working of the current government.

Congress alleged that the government didn’t fulfil its poll promises. The inflation, rising prices of essential commodities, and unemployment haven’t been attended. The Opposition also alleged misuse of government machinery and corruption. The Congress termed the second round of investor meet as an eyewash. The state government has failed in procuring any central package for the industrial development in the state, the Congress said.

The opposition also condemned the inconvenience caused by taking over 1600 HRTC buses off their routes and deploy them for the rally. Also, the organization of such a huge rally amid the fear of the third wave of the pandemic was also questionable considering the precautions other states are taking.

Similarly, the Communist Party of India also carried out a protest march in Shimla city on Monday. Sanjay Chauhan, a senior party leader and former mayor of Shimla, alleged that the government hasn’t fulfilled several of the promises BJP had made before the elections.

“BJP had promised to ease the lives of the people by reducing inflation and generating more employment opportunities. It had also made a promise to ensure better prices to farmers for their crops and hike daily wages. The employees were promised the revival of the old pension scheme and a new policy for contractual and outsourced employees, Sanjay Chauhan said.

“BJP had also promised payment of proper compensation by implementing the Land Acquisition Act, 2013. But the state government is yet to fulfil any of these promises,” Chauhan added.

“The unemployment rate which was 0.5% in April 2017 had risen to 28.2% till May 2020, and 8.5 lakh educated youth is still registered with the employment exchange, waiting for employment,” Chauhan added.

He also said that the government has almost cut all the subsidies given to farmers on seeds, manure pesticides, insecticides, fungicides etc.

The Prime Minister inaugurated and laid foundation stones of projects worth about Rs 11,581. The main projects include the following:

Constructed near the Hatkoti temple on the Pabbar river in Shimla district, the government claimed that this project would generate 386 million units of power per annum and generate annual revenue of about Rs 120 crore to the State through HPPCL.

He also laid foundation stones of Rs 7000 crore Renuka ji Dam on Giri river in Sirmour district and 66 MW Dhaulasidh Hydro Electric Project, a joint venture between the Government of India and the State Government located on the Beas river in Hamirpur and Kangra districts, the government informed. This Project being executed by the Satluj Jal Vidyut Nigam Ltd. would be completed by spending an amount of Rs 688 crore.

He also laid the foundation stone of the 210 MW Luhri Stage-I hydroelectric project to be constructed by spending Rs 1811 crore on the Satluj river in Shimla and Kullu districts of the State.

Though the Hydropower projects are debatable and aren’t considered eco-friendly due to several reasons, the Prime Minister said the ones launched on Monday “reflects India’s commitment to eco-friendly development.”

“When the Shree Renukaji Dam project on the Giri river is completed, a large area will be directly benefited by it. Whatever income will be generated from this project, a large part of it will also be spent on development”, the Prime Minister claimed.

He claimed that India is meeting its environment-related goals with a remarkable speed.

“In 2016, India had set a target to meet 40 percent of its installed electricity capacity from non-fossil energy sources by 2030. India has achieved this goal in November this year itself.” the PM claimed.

He said that the State got AIIMS, Atal Tunnel and four Medical Colleges during the tenure of the present Government. But the Congress alleges that the BJP government is taking undue credits for several projects thought and initiated by the previous Congress government. Atal Tunnel is one of them, the opposition alleged.

Prime Minister Narendra Modi also presided over the state government’s second “Ground Breaking Ceremony of the Himachal Pradesh Global Investors’ Meet” at Mandi. The government said that in the event, 287 investible projects worth ₹ 28,197 were grounded.