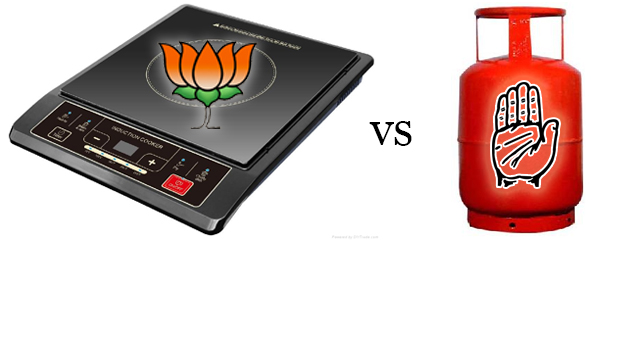 A brief introduction to the induction cooking, how it actually works and its pros and cons

In the ongoing clash of two rival political parties, the Congress and BJP, we witnessed the use of many weapons against each other. The FDI, corruption, development, and economic reforms are the heavier missiles in the list. The recent attack of BJP targets the royal background of Virbhadra Singh as compared to Dhumal, who presents himself as a humble son of a farmer. Prem Kumar Dhumal is preaching that the royal habits of the Raja Ji are a reason of the great worry as it increases the communication gap between him and the public. Dhumal has even been talking about some CD released by Congress to defame him. One thing is sure that, Mr.Virbhadra is playing the game of politics on a mature level, while Dhumal camp relies mostly on leveling allegations and a few other cheaper tricks.

Mr. Singh’s experience weighed heavy on BJP this time. The ruling party doesn’t have much to claim on the name of development. BJP is making sure that it reminds the public of the step taken by UPA government regarding the LPG cylinders. Hence, free induction heaters have been promised to relieve the ‘Aam Admi’.

That doesn’t make the Congress any better than its rival and most of us are well aware of that. However, as an individual politician, Virbhadra is displaying better and a bit decent skills while he campaigns for the upcoming assembly elections in Himachal.

Far away from the big issues, for the lower middle class, that makes majority of the public, the confusion is whether they want ‘Free Induction Cook Tops’ or increase in the number of subsidized LPG cylinders. That’s because, the ruling BJP has tried to improvise for the cap put on the subsidized gas cylinders, while the opposition chief offered to add 3-4 cylinders under subsidized cap. It’s indeed a very sensitive issue for the greater part of the voter bank. Paying Rs. 900 for a cylinder means a great deal for any lower middle class family and a kitchen without a cooking source is not called a kitchen. Cooking is the basic and daily need of any human and LPG is the favorite of domestic kitchens, while induction plates are less common for regular cooking.

We thought, it would be a great help to explain to the public what exactly the induction heater is and how does it operate. There are merits and demerits of an induction cooktop, which we don’t think Mr. Dhumal would be interested in explaining in detail. An Induction stove after removing the top plate

The induction heating isn’t new and is being in used from a decade. However, recent technological advancements in the induction technology and increasing popularity of induction cooking in many popular and small restaurants made it somewhat known to the common person. The present rate of LPG and the cap on the subsidized cylinders in India is going to boost the induction cookware industry for sure. It can be a jackpot for induction cookware manufacturers.