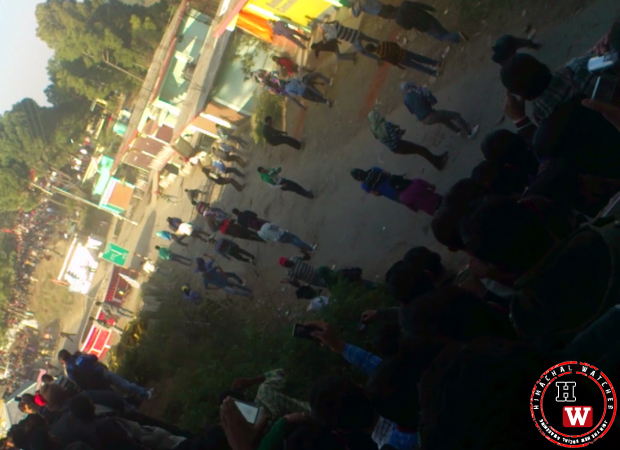 This fair is held in village Halog of tehsil Shimla. Halog was the capital of erstwhile Dhami state. The fair is held on the second day of Diwali in the month of Kartik(November). In ancient times human sacrifice,it is said, used to be offered to goddess Kali every year at the spot where the fair is now held. It is also said that on this day the widow of a ruler of the state performed ‘Satti’ and that before doing so she had ordered to make human sacrifice henceforth.

Human sacrifice was stopped after sometimes. Stone throwing fight between two parties is the main attraction of the fair and whatever blood oozes out from the wounds caused by injuries on the bodies of the participants is collected and offered to the Kali. Apart from the stone throwing game the ‘hindola’ ride is also enjoyed.

An age–old tradition of pelting small stones at each other and smearing a ‘tilak’ on the forehead of Goddess Kali with the blood of the injured was held in this village in Himachal Pradesh, once the favourite hunting ground of the British.

Old–timers say in the 18t century ‘Patharon ka Mela’ (festival of stones) male adults from Halog, the erstwhile capital of Dhami estate, and neighbouring village Jamog gathered here, 22 km from Shimla, and pelted small stones at each other.