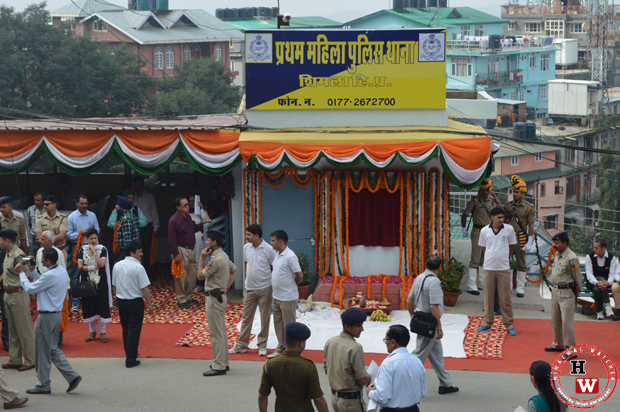 SHIMLA- Today morning life in Shimla, BCS and adjoining areas to be specific, came to a standstill for public, only VVIP were on the move. It was the occasion of inauguration of the first all- woman police station (at BCS) by the honorable chief minister of Himachal Pradesh, Shri. Virbhadra Singh.

The traffic police was ultra- active due to the VIP movement towards BCS. The IPS, HPPS, the Mayor of Shimla, Deputy Mayor, all awaited the arrival of the CM under heavy deployment of police on multiple spots on all roads leading to BCS. BCS bus stoppage was just not for the public today, hundreds of policemen were seen hurled vehicles anywhere and anyhow they could. One of the cops was seen literally pushing passengers into a bus asking them to climb-in hastily. The rain-shelter, opposite the police station, accommodated the Himachal Police Orchestra while the public were stranded on the road. The scenario was such that the bus stoppage was transformed it a area of utter commotion and the public was found completely zapped. The whole area was looking cleaner, properly swept, and even the usual garbage heap on the routine waste disposal spot was also missing,which is otherwise an ugly sight, always stinking. The MC did not take notice even after HW had wrote regarding it many time along with some readers who had posted recent images of the condition. Take a look at the image above.

The policemen were in hyperactive state, around 8-9 of them restlessly cleared the traffic like their hands or head will be axed on possibility of any mistake. They are trying to show the best of their allegiance less towards the CM but more towards the person who holds the chair. The common crowd turned into insects crawling in the way of VVIPs, and nothing more. When asked from the cops at Vikasnagar as why the traffic was disabled towards BCS, they simply denied having any information regarding it. That’s a very lame excuse!

Later, the whole traffic including public transport was brought to complete halt as the CM neared the destination. Vehicles on the way towards BCS from Vikasnagar or Chota Shimla (via Broc Hurst) were asked to stop and queue up in middle of Vikasnagar and BCS until the CM is done with the ribbon cutting and the pooja.

People started taking to the road on foot (to their offices and schools) as public transport was disabled. It’ll be useless to protest against the organization of unnecessarily exaggerated ceremonious inauguration of a police station, but we wonder why the inauguration was scheduled at the busiest hours of morning when Shimlaites are gearing to reach their offices, colleges and schools.

To us, the whole thing about inauguration in the busiest hours seems completely absurd. The politicians and bureaucrats are concerned about the pomp and show, they’re obsessed to make it into the inauguration news that the newspapers would carry on the following day. For them, such inauguration and shows off ceremonies are always worth a shot to impress the public.

How the CM would ever experience what it feels to move in the traffic of Shimla during the busy hours when the traffic of whole Shimla is brought to halt to facilitate his movement? There is no respect for common man’s time, but the VVIP’s time is always given preference. In democracy, the public is the real ruler; therefore, the public should be put on the top, and then comes these representatives they elect to serve them. But, seriously, the public has no sense of it at all. They are ruled instead.

Their representatives have secured VVIP status, fleet of luxury vehicles with police sweeping the routine traffic out of their way, heavy security arrangements, and even the public transport is checked to make sure that these VVIPs don’t have to spend even a second in the traffic. Well, the police isn’t at fault. Who would not fear the man (the CM) who had ordered on the spot suspension of CMO on seeing the name of health minister Kaul Singh, his political rival, on the inauguration board? Take a look at the video:

The VIP and VVIP culture is one the most unwanted privilege that is entertained in the name of dignity towards Indian constitution and on the cost of public inconvenience. Will India ever see a day when the deserving common men would get invitation for inaugurations instead of these VVIPs? Nothing seems to have changed in India even in 21th century. Now the caste system is being replaced by the lines drawn on the bases economical status or on the base of any power a group holds and enjoy in the society. The gap between the group of common men and that of VIP and VVIP categories is widening. The modern India is growing more discriminatory, but this time, it’s happening in disguise of VVIP culture.

To get the read beacons back, the HP MLAs are trying to play on sentiments associated with the Indian constitution. They talk of preserving the dignity of their highly responsible position while inside the assembly they behave no better than irked monkeys growling on the opposition, they take off their clothes in the parliament, use paper spray, brandish knives etc. About what dignity they talk about then.

More than the Govt., the public need to awake and question the preferences made up for the convenience of a few groups. Our society doesn’t need show offs. It needs decent, persistent efforts to serve the public on the part of its administrators and public representatives.