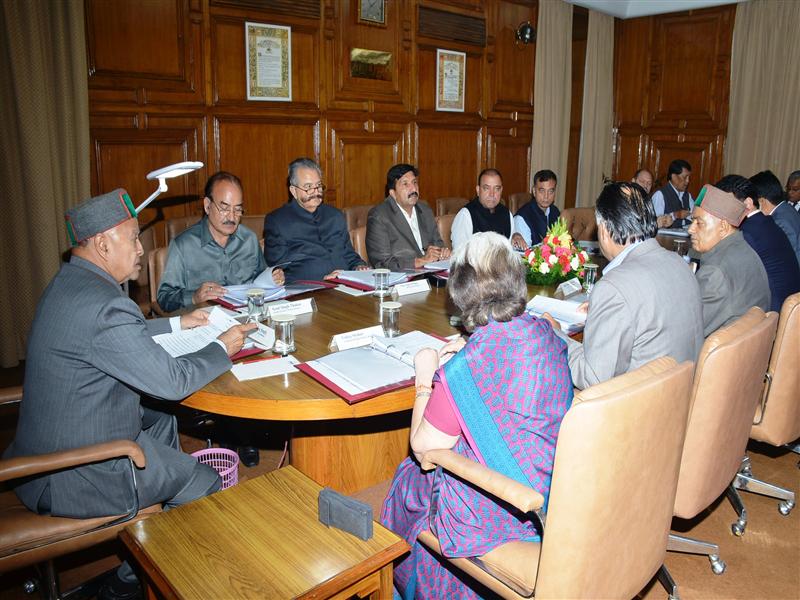 The Cabinet in its meeting held here today decided to provide additional honorarium of Rs 1000 to as many as 518 Special Police Officers (SPOs) rendering service in remote areas of district Chamba and Lahaul & Spiti bordering Jammu and Kashmir. This follows the announcement of Chief Minister on his tour to Salooni in district Chamba in February this year.

The meeting was presided over by Chief Minister, Virbhadra Singh.

Regarding relaxation and exemption in the prescribed criteria of AICTE and H.P Private Technical and Vocational Educational Institutions (Regulation of admission & fixation of fee) Act, 2008, it was decided that criterion of 50 percent marks in qualifying examination be made mandatory for admission this year with relaxation of 5 percent for reserved categories. However, it would be a final relaxation and from next year no relaxation/exemption in the prescribed criteria of All India Council of Technical Education (AICTE) and HP Act, 2008 will be allowed. It was also decided that security amount of students passed out be refunded within stipulated time.

It was decided that faculty members of Medical and Dental colleges be allowed time bound up-gradation of designations upon fulfillment of eligibility criteria in their substantive pay subject to fitness and approval was also given for establishing collegium style of functioning in two medical colleges and a dental college of the State.

A decision was taken to relocate the H.P PWD Shimla Rural Division Dhami to Totu and a new PWD Sub-Division to be opened at Dhami.

It was decided to raise one additional company of Home Guard Volunteers at Sub-Division Chopal in Home Guard and Civil Defence Department as per the announcement of Chief Minister.

The Cabinet gave its approval to allot land on lease to DAV College Trust and Management Society New Delhi for construction of school building and play ground at Rehan in district Kangra.

It also gave approval for filling up posts of various categories in district Lahaul-Spiti.

It approved broucher/guidelines for inviting applications for allotment of small hydroelectric projects up to 5 MW capacity under identified and self identified basis as proposed by HIMURJA.

It was decided to engage teachers through School Management Committees (SMC) on period basis in elementary and higher education departments in all the newly upgraded schools in the State and it also approved to extend this SMC policy to the schools where any sanctioned post was remaining vacant for over two years.

It also decided to create and fill up 24 posts of different categories in Rajiv Gandhi Government Engineering College, Kangra at Nagrota-Bagwan.

The approval was accorded to create 13 posts of Supervisors in Municipal Corporation, Shimla from retrospective date by upgrading the posts of Mate/Labourers.

It was decided to grant the pay structure of 10,300-34,800 +4800 grade pay to Ward Sisters in Health & Family Welfare Department from prospective effect.

It was also decided to fill up one vacant post each of Assistant Professor and Associate professor in department of Nephrology in IGMC Shimla through Himachal Pradesh Public Service Commission by direct recruitment.

It was decided to fill up 20 posts of Assistant District Attorneys on contract basis in Prosecution department and filling up three posts of civil judge in Himachal Subordinate Judiciary.