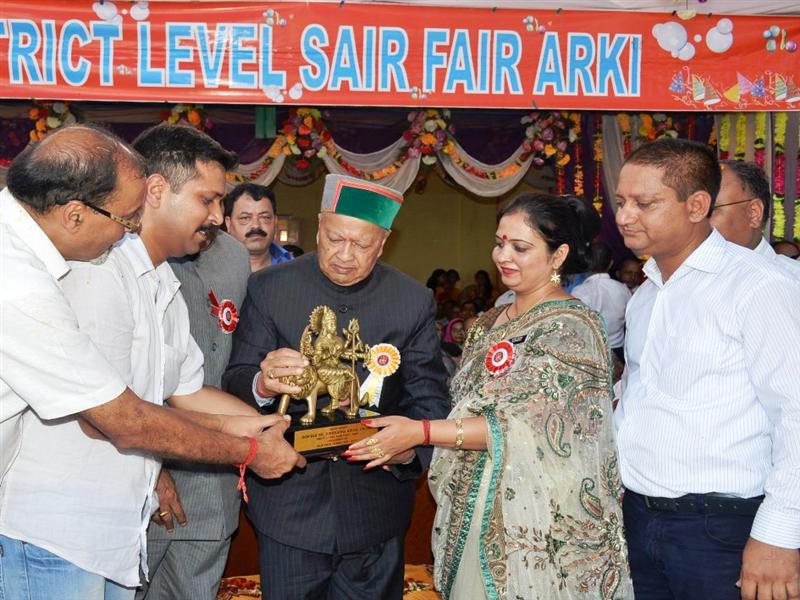 Fairs and Festivals are the real identity of our traditions, customs and culture and required to be preserved as they are inseparable part and parcel of the life of the hill people, said the Chief Minister, Virbhadra Singh while addressing a massive gathering after inaugurating the famous district level ‘Sair’ festival at Arki, which is also known as ‘Festival of Bulls’, and is also famous for exhibition of rare breed of Buffaloes.

He said “I anticipate that the knowledge of our culture and customs percolate down to generations and I believe that the coming generations will conserve our cultural legacy by giving added attention to our religious ceremonies, fairs and festivals,” He said that he wanted to carry the people of the entire State along with him and he did not believe in Politics of sorts, which in long run proves to be detrimental.

Chief Minister also released a souvenir on the occasion brought out by the Mela Committee and inaugurated the exhibitions set up on the occasion by various Government departments and NGOs showcasing the development activities.

While speaking on the occasion, Col (Dr.) Dhani Ram Shandil, Social Welfare and Empowerment Minister, congratulated the people on the occasion and counted achievements of the Present State Government.

Smt. Seema Sharma, President Nagar Panchayat, Arki, welcomed the Chief Minister and other dignitaries present on the occasion. She also raised local demands of the area and assured of full co-operation for carrying out development activities in the area. She counted various ongoing development activities.

Rajinder Thakur, Member Animal Welfare Board also welcomed the Chief Minister and honoured him and other dignitaries.

A colourful cultural programme was also organized during the opening of the Sair fair.