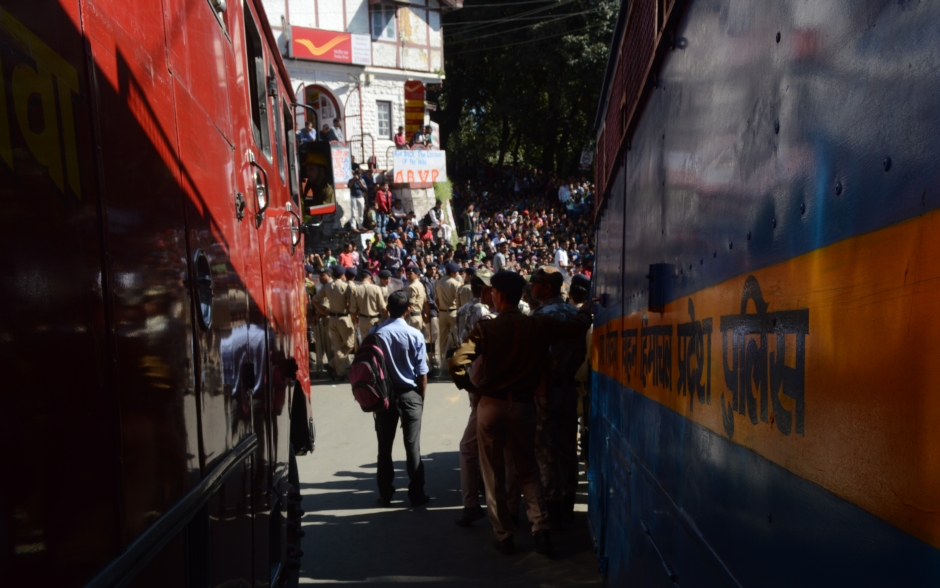 Reporting today’s student protest against massive fee hikes and for not conducting SCA elections, a newspaper reported (Online Update) that ‘police cane charge after students scramble with the HPU VC.’ An HW member arrived at HPU Summerhill at 8:00 AM, 45 minutes before the protest begin and before any media person arrived, and captures many images and a video showing what exactly happened. Take a look at the video first. It was a very unfortunate sight to see how Govt. and HPU authorities are misusing police; a tool in state machinery meant for the protection and safety of its people.

HW had been following HPU campus from couple of years, we brought images from SCA elections, SCA functions, and protests for our readers. We always received very encouraging feedbacks from the readers. With respect to the trust of our readers in HW, we would describe the scene as a witness, and not as manipulated news by some bound reporter.

For last 18 days, students are on chain hunger strike, but no authority member of Govt. representative bothered to even listen to their grievance. Before that, students have been staging regular protest against innumerous student grievances, but nobody moved a muscle. The Vice Chancellor and the state Govt. did not consult democratically elected SCA before making massive, rather absurdly unjustified, hike in various HPU fees along with all affiliated colleges in whole Himachal. Some fees are hiked by hundreds of times, while some of them went beyond 1000-2000%.

However, no one considered the growing unrest among the parents and the students. Afterwards, the VC defers the SCA elections for the present session, which were due to be held in Aug-Sept. A couple of days ago, a student body of research scholars had approached the VC with a plea to take back such huge fee hikes. They received a rude and absurd answer from him. He said, “Quite University if you can’t pay the fee’. Today, when the anger reached almost its peak, the students gathered at HPU campus gate in the morning and stopped VC’s car by blocking the road in an effort to make him talk to the students, answer their distressed calls and questions, about providing a justification of such huge fee hikes, the VC literally ran away from Summerhill under heavy police protection. Not even a finger touched his coat, no one abused him, and there was no scramble. But our media seems to be either partially blind, highly manipulative, and biased.

The title by that newspaper wins all sympathy for the VC and stage students as violent creatures. Instead, the students had to bear a light canecharge, and abuse by policemen.

The video uploaded above showed how policemen are overdrunk with wearing the power vested in ‘Khaki’. The students struggled to reach the VC and to stop him so that they could talk to him, but their anger grew as the VC ran away from the situation taking a cover of police protection. What should be expected from suffocating students, who are burdened with unjustified fee hikes while the standards of education and basic facilities rots at HPU? What should we expect from frustrated research scholars who are forced to come out on streets against the unjustified economical burden imposed on them for nothing?

It’s not about SFI or ABVP, it’s just about what is right; the truth. The Directive Principles of State Policy, enshrined in Part IV of the Indian Constitution reflects that India is a welfare state. Article 38 of the Constitution reads

The State shall make effective provision for securing the right to work, to education and to public assistance in cases of unemployment, old age, sickness and disablement, and in other cases of undeserved want.

The Govt. extract taxes from the public on everything they earn or spend. These taxes also include education cess. While proposing this tax, Govt. had claimed it justified on the grounds of commitment that government will provide universal access to quality basic education. It means that the parents are already paying annual installments to the Govt. to meet the expenditure of their children’s education. However, students are again asked to pay fee to get education in a Govt. institute, and on top of it, you raise these fees to such an extent that the institution appears to be a sort of shop where education is being sold, and those who can’t afford it, are left on their own. These students, who were ignored when they tried to protest peacefully, are now busting with anger. Their anger is well justified. The university is meant for students. A Govt. educational institute must not be converted into a shop, especially when majority of public is struggling for economical stability. A nation with a low literacy rate is expected to make every possible effort to provide education to unprivileged section of society at the minimum cost possible. Does it make sense to extract profit from education in a nation where a huge number of students are forced to drop their school in order to take up job to earn and to survive.

What kind of economical background should we expect from the students who come to attend the only Govt. higher educational institute in the state?

These students, who are on hunger strike for over last two weeks, need support from all of us. Today, while the police was readying their water cannons and canes, waiting for the orders to charge on students, the students instead of dispersing put their bag and purses in a corner, joined hands like they are ready to take up repressive forces of the Govt. Take minute to contemplate as to why over 500 students would choose to be a subject to canechare or why they would bear water cannons, and still come back to face the same fate again and again? Their motivation doesn’t lie in political interests. Rather, it’s the zeal to fight for their rights, stand for the truth, and follow the principals that true revolutionary freedom fighters had laid down.

We would request all to stop assuming the situations based on what media says, and try to adopt a critical approach. These students aren’t foreigners. They hail from different parts of Himachal and as insiders, they have every right to protest and fight for their rights. Unceasing unrest in HPU, who must take the batten and restore order?