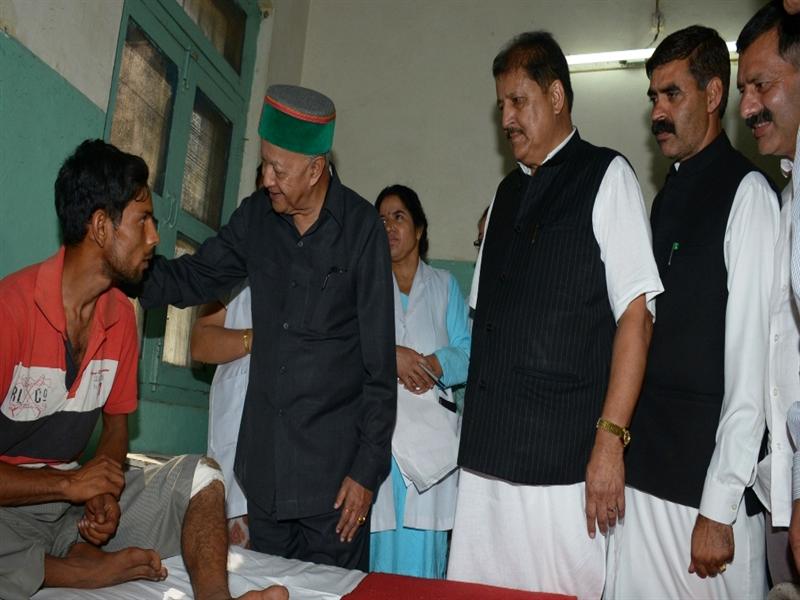 Chief Minister Virbhadra Singh today visited the Ghumarwin and Bilaspur hospitals to inquire the well being of the injured of the bus mishap near Rahian bridge in Bilaspur district on Wednesday. ,

He said that all the cost regarding their treatment and other logistics would be borne by the State Government. The government will also make all possible arrangements for those visiting Haridwar to perform rituals of the deceased.

The Chief Minster asked the doctors to provide best possible treatment to injured. He also directed the PWD authorities to take necessary measures for renovating the Bilaspur hospital building.

Later, interacting with the media persons at Circuit House Bilaspur, he said that appropriate measures will be taken to restrict overloading in the buses and the Government will see that the licenses and routes of those who violate the norms stands cancelled.

He said that the Government will see that the buses, whether private or HRTC wont carry the passengers beyond the seating capacity and if any such matter is reported, causing danger to the lives of the people, strict action will be taken against the defaulters.

“No one will be allowed to flout the traffic norms and action would be initiated as per the law against such people who violate the traffic rules and regulations” said he, adding that the Regional Transport officers would be directed to keep check on the overloading of buses.

Answering to a question of overloading in private buses, Virbhadra Singh said that to keep tab on the private bus operators adequate staff would be deployed as per the requirement. He said that the traffic was ever increasing day by day and assured that more inspecting staff would be positioned in different parts of the State.

He said that Ayurveda Hospital would be constructed in Ghumarwin, provided adequate land be made available. He also assured to take up the matter with National Highway Authorities of India (NHAI) for making pedestrian path along the NH in Ghumarwin town.

While answering a question on the statement of former Chief Minister Prem Kumar Dhumal, in section of press today over the repeated accidents in the State due to bad condition of roads, Virbhadra Singh said that it was not during the congress regime that such mishap were occurring and Dhumal should stop criticizing the same. “No one takes the statements of Dhumal

seriously, not even the inner coterie of BJP and he should refrain from deriving political mileage on the natural disasters or mishaps by issuing such irrelevant statements to the media.

On the demand of the local residents of Rishikesh regarding starting more buses from Rishikesh to Bilaspur, the Chief Minister said that more private operators should come forward and apply for the route, and the government would permit them so and will also find out the possibilities of starting the HRTC buses thereafter.

CM directs for early completion of parking slots in Shimla

HRTC taxis only for senior citizens and disabled persons