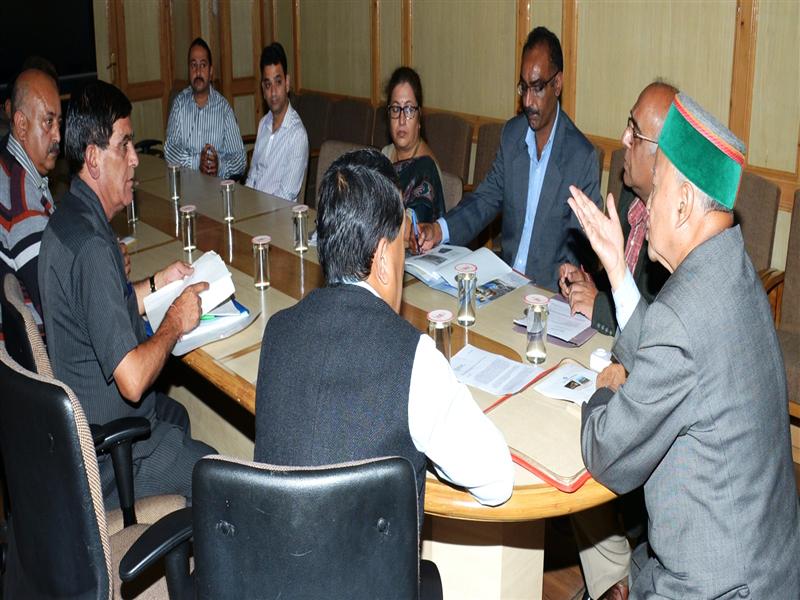 More avenues would be explored to construct the parking slots in Shimla town so as to provide adequate parking space to the residents of the town said Chief Minister, Virbhadra Singh while presiding over the meeting pertaining to the status of parking on Design Built Operate Transfer (DBOT) in Shimla town.

He stressed that all the parking slots being constructed in Shimla should have a roof in historic Gothic style so that these multi-storey compounds may not face any problem of leakages during rain and snow, besides being safe for vehicles.

The Chief Minster while reviewing the status of the four major parking complexes being constructed at Sanjauli, Chotta Shimla, Vikas nagar and Near Lift stressed for their early completion.

There were many open areas in and around Shimla which could be developed into parking slots, said the Chief Minister, asking the authorities to explore such places in and around Cemetery tunnel area and on the Jakhu road.

He said that Titla Hotel building near Jakhu was dilapidated and unsafe for those living there and was ever posing threat to the inmates which could be acquired and a parking space could be managed there for around 100 vehicles. This would also reduce the congestion on the road, he said. The PWD sheds and a building on the way to the Cemetery near Dhalli tunnel was also an obstruction for the Ambulance and other medium vehicles and possibilities may be explored to dismantle the same and a proper parking be constructed there.

“I am pained to see that there is no green cover and concrete structures were coming up in haphazard manner in lower Sanjauli area” he said. Steps should be taken for plantation in left out open areas and also explore prospects of constructing parking somewhere near saint Xavier School to ease the traffic load on the roads.

When completed all the four parking compounds will provide parking facilities for as many as 2000 or more vehicles, said Amarjeet Singh, Commissioner, Municipal Corporation, Shimla. He said that parking at Sanjauli will be completed by the end of December, 2014, however the construction company had agreed to hand over the six floors for parking soon.

Vineet Chaudhry, Additional Chief Secretary, Urban Development assured the Chief Minister that the direction regarding early completion of the multi- storey parking compounds would be adhered.

Additional Chief Secretary and Principal Secretary to Chief Minister, V.C Pharka assured the construction agency that no vehicle would be allowed to be parked in front of the parking complex at Sanjauli till its completion and asked the concerned officer to look into the matter.

Pharka said that another multiple parking will be coming up near Tourist Information Centre, on Shimla-Kalka National Highway, near the new bus stand, Shimla with commercial complex on top floors.

Appropriate measures will be taken to restrict overloading: CM