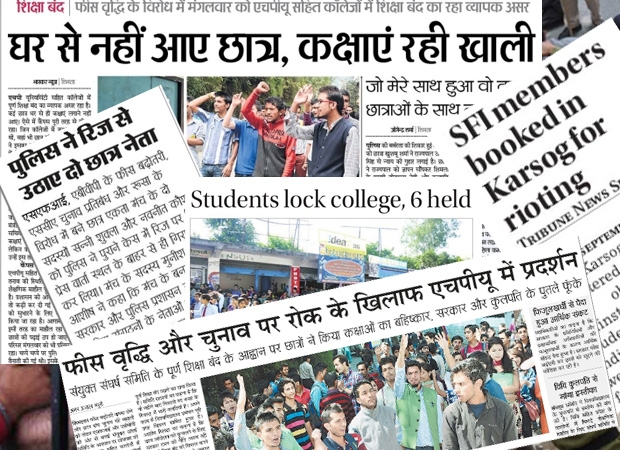 Life in the Himachal Pradesh University does not seem coming on track anytime in the near future, courtesy the political gimmick played by the State government, 144 in the campus and threats being received by student leaders.

The formation of Fee Review Committee – and the one month period it has been allotted to evaluate fee structure in the University, is nothing more than an eyewash. It is a ploy to win time, a pacifier for questioning media representatives, and halt to the student movement in a lingering political maneuver.

The unification of two prominent student unions (SFI and ABVP) that called for a Shiksha band (a complete ban on studies in colleges across the State), until September 25, has got chairs shaking in the political corridors. Students’ agitation, which began as a silent movement in HPU, has now spread like wildfire (after the police brutality in the varsity) to all parts of the State. HW has learnt of numerous arrests from different parts of HP and learns that the Shiksha band is being successfully marshalled pan Himachal.

Behind the cloud of fee hike, another more vivid student issue had taken a backseat, until today, when a trick turned on its head for the University management (a political backed move).

The merit-holders selected as new office bearer in the SCA immediately choose to resign from their positions within hours of their ‘forged selection’. The new selected President, General Secretory and Joint Secretory have filled their resignations – HW has scanned copies of the resignations (picture below), and we learn the other selected members will be resigning soon. 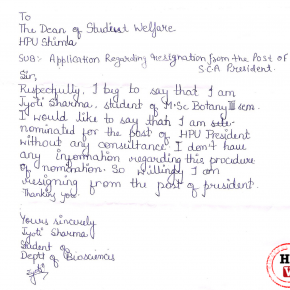 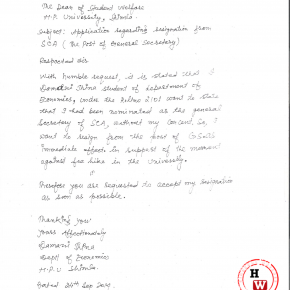 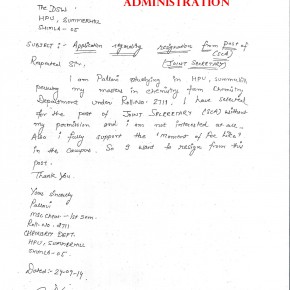 Now, I come back to the forged selection referred to in the previous paragraph. From their resignation letters, HW learns that students selected for the SCA were not informed before their selections and no confirmation from them was sought for the same by the University management. We further learn that the nomination forms of these students were not signed by the students themselves – then a question arises, who forged their signatures? Why is the State Government and the University management taking haste decisions? Why is there so much unrest and so many errors? Is there even a little motive to make some sense of the monstrous fee hike? Guess, it’s no way close!
Today, into the third day of the Shiksha band, students enrolled in various courses in the University were seen in the campus. Since, these students stand firmly in support for the Shiksha band – they were seen using the library or sitting in the open outside the classrooms. These students believe their University will soon have functional classrooms – but sadly the Fee Committee tactic has surly pushed this back by a month. With Photos and Inputs from Kritika Sehgal