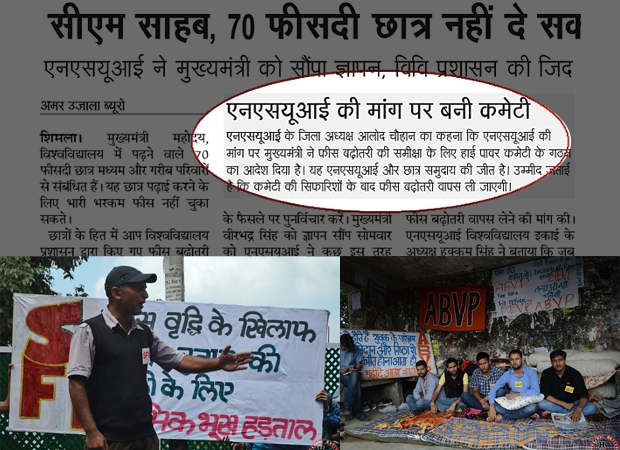 The Congress Govt. is withdrawing now, but still it’s trying to collect credit for its representative student organization at HPU, NSUI.

SHIMLA- The HPU campus student protests were triggered as soon as RUSA was implemented very poorly by the HPU administration. Then, the massive and illogical hike in fees fueled it, and now, the brutality of HP Police on peacefully protesting students has sparked anger in the student community of Himachal.

The Chief Minister, Virbhadra Singh, had declined every appeal from the students and had given a statement that clearly said, “In no way neither the decision of fee hike will be rolled back, nor the SCA elections will be reinstated”.

Now, when the anger is bursting among students in various colleges all over Himachal, the Govt. has declared that a three member committee, headed by retired Justice V.K. Sharma, will review the decision. The education bandh call given by the joint front of the SFI and the ABVP till September 25 affected teaching on the very first day in the State on Monday. The colleges in Mandi, Hamirpur, Nahan, Una are also burning in the flame of anger, and their protests are making headlines. The Congress Govt. is withdrawing now, but still it’s trying to collect credit for its representative student organization at HPU, NSUI. Today, the daily newspapers wrote that the decision to form a review committee was taken after NSUI approached the CM with an appeal to reduce the hiked fees. NSUI, which was nowhere to be seen from the time when all this turmoil begin at HPU campus, which did no more than signature campaigns, neither suffered the brutal lathis and kicks of police, has forced the Govt. to change its decision in just one day. SFI was protesting from past many months, then they were on chain hunger strike for 20 days, they were exposed to police brutality, but that did not move him and NSUI did this in a single attempt. It’s quite a good joke on the part of dailies publishing this news. Each one of us knows who deserves the credit here. Even ABVP was on chain hunger strike and they had also faced lathicharge by police when they had surrounded the HP Legislative Assembly. NUSI was nowhere to be seen except in daily newspaper headlines.

Either, the newspapers are so innocent that they believe everything which is dictated to them by the Govt. or they are pimps.

The Congress Govt. doesn’t want to accept that the unexpected union of SFI and ABVP supported by CPI(M) and BJP has scared the CM. While he loses the battle he himself had started, the Congress Govt. trying to make up for the damage to its reputation.

The newspapers are equally helping him to spread a manipulated story. The newspapers are deep into the abyss of corrupted politics. They are the medium to keep the public in delusional states, where they are told that they are free and they are the real rulers in a democratic state. The media is the best tool to exploit psychologically effective tricks.

Politics isn’t dirty itself, the people playing tricks of manipulation, and the slave media is. The real power is always in the hands of the people of any democratic state. It’s just that the politicians are manipulating it to turn this power against the public. ‘Divide and Rule’ is the most valuable asset that our politicians have inherited from British while they ruled India.

For example, HPU students are divided into groups called ABVP, SFI, NSUI, and remaining are categorized as neutral students. The biggest advantage that encouraged the Govt.’s brutal attempt to murder the righteous students protesting against the massive fee hikes in their courses was the lack of unity among students. After 18 September’s brutal assault on students by police, now, ABVP and SFI are compelled to come together and fight from one platform against the common enemy of the state and it’s only Govt. University.

The political parties are the one who encourage young seeds of politics at educational institutes. It ensures that students always stand divided, which inflicts the unity, and as we all have read in our primary book, “Union is Strength”. Same is the case with whole India. The democracy is faulty just because a very essential prerequisite of a successful democracy is missing; unity in the people, the unity that should scare the Govt., and not the other way round. Ex-Chief Minister of Himachal, Dr. Prem Kumar Dhumal, critized the Govt. for its incapability of dealing with the student unrest. The unwanted environment at HPU campus is the creation of the Govt. itself. He commented:

“Police force is being used to silence the voice of students which is undemocratic. Instead of dealing students with lathis and sending them to jail, the government should treat them like their own sons and accept their demands before the situation becomes tense.” Further, Dhumal added, “In the session 2012-13, our government had given Rs 72 crore to Dr YS Parmar University of Forestry and Horticulture, Solan, and Rs 82 crore to Himachal Pradesh University, Shimla, but the government had reduced it and given only Rs 48 crore and Rs 65 crore.”

First results under RUSA were declared after a prolonged delay. It took nine months for HPU to declare results. Out of 2.45 lakh award received in the first year of undergraduate courses, discrepancies were detected in 90,000 cases. There were colleges which could not generate the 14 digit roll number for conducting examinations.

One of the causes of this mess was the inefficiency of the examination branch, which is already reeling under staff crunch. Executive Council member Chaudhry Waryam Singh Bains said: “The employees are over burdened as 246 posts of teacher are lying vacant and 18 will retire next year. Not only this, 333 posts of non-teaching employees are vacant and 62 more will retire this year.”

Now, the people from other sections of the society are also coming out in support of the students. A social activist in Mandi district has threatened to go on an indefinite fast to protest the unprecedented fee hike by HPU and lathicharge on students in Shimla.

It’s time to be careful and critical while we go through any news in dailies or on news channels. If the media had really been unbiased and dutiful to the responsibility it was bestowed with, then India would have been a much better place. The fourth pillar of democracy need to be put back on track, and no other than the people themselves could do it.

The student organizations need to learn the real meaning of a protest. Lack of unity in any protest is the biggest advantage we could give away to the corrupt Governments. The present situation is an opportunity to test the power of unity, to shed the badges, and stand like one body.

State Govt. throws a bait, anything but HPU students to fall prey