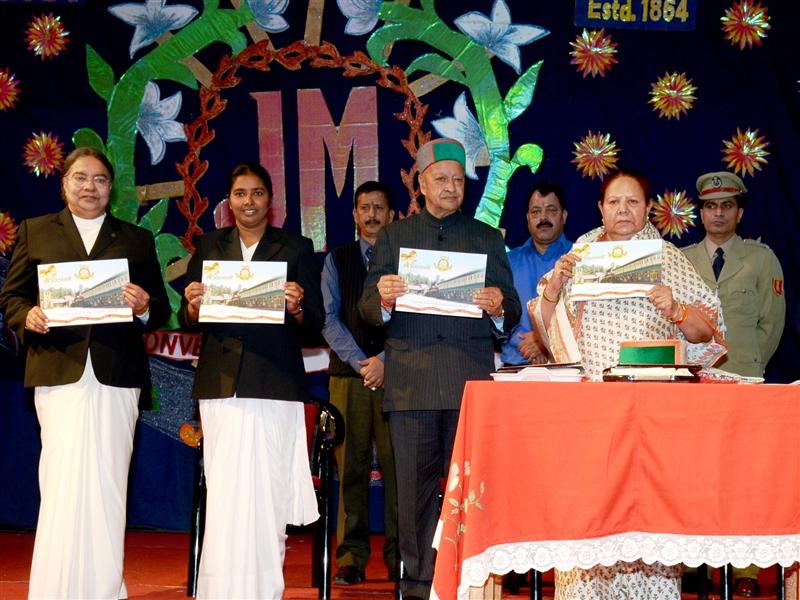 Lauding the efforts of the Jesus and Mary School, Shimla on the occasion of its sesquicentennial celebrations, Governor, Urmila Singh in her key note address said that the dream which the founder of the School Sister Claudine Thevenet saw had seen realized as the school had prospered in last 150 years and it emerged as one of the pioneer educational institute in the country with the earnest efforts of the present school faculty and management who were working with commitment for taking the level of education to new heights.

She said that the State Government had taken many initiatives in the field of education and it was a matter of pride that Himachal Pradesh today stands second to Kerela in terms of literacy. She said that only that society prospers where the girl education was given due importance and said that she was happy to learn that the school was also known for its cleanliness and greenery.

Speaking on the occasion, Chief Minister Virbhadra Singh said that this was an historic occasion and a proud moment for the school which was celebrating its sesquicentennial celebrations in more effervescent manner. Convent of Jesus and Mary was one of the oldest school amongst others as Bishop Cotton and Auckland House School in the State capital.

“Shimla is blessed with best educational institution of the times which have achieved many milestones of quality education to boys and the girls, and I am proud that I am here on this occasion, when the school after many ups and down initially, today stands established as a premier institute providing qualitative education to girl child”, said the Chief Minister.

Recalling the past, the Chief Minister said that he visited this school during his school days and since then, a lot of expansion had been made and the new blocks were elegantly constructed keeping in view the ecological balance. He congratulated the staff and the sisters and wished success in all their endeavours and said that he had no doubt that the girls who would pass out from this school would not only be well educated but also would stand up to the responsibilities of life modestly.

Wishing all success to the institution, the Chief Minister said that the school may prosper leaps and bounds in times to come.

Appreciating the well managed cultural performance, he said that the dance drama staged on the occasion was very meaningful and with a godly message. He said that the task, school management have taken on them, be fulfilled with the glory and blessings of the God and the school may prosper in bounties.

The dance drama depicted the journey of Jesus and Mary, the turbulent times and the days of glory it witnessed in the last 150 years and moved the audience.

The Governor and the Chief Minister also released the souvenir of the school on the occasion.

Earlier, Sister Shyma Jose, Principal, Convent and Jesus and Mary welcomed the Governor and the Chief Minister on the occasion.