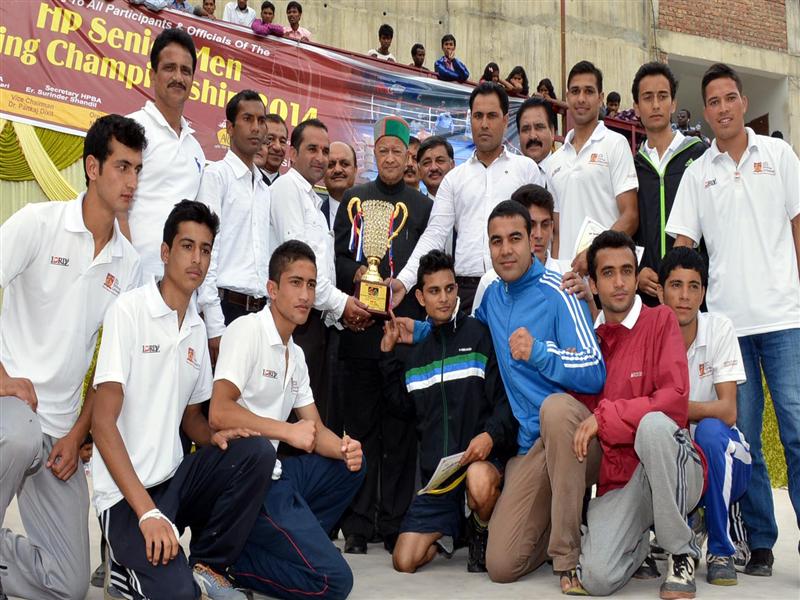 Chief Minister Virbhadra Singh announced for setting up a Boxing Hostel in the State. He was speaking on the occasion of the HP Senior Boxing Championship for Men at APG University Campus here today.

He said that such type of Championships provides a platform for the budding players to reassert their dominance in the sport and for emerging the boxers to display their skills.

Virbhadra Singh said that since the State was promoting every type of sports, but Volleyball was considered as the favourite. The State Government was mulling to promote boxing in a big way as the game did not require any big paraphernalia.

“Though many big play grounds are being constructed in the State to host games as Hockey, Soccer, and Cricket etc, our Government want that every school must have its own playground so that children can develop the playing skill from the very early stage” he said. At present the State was spending a sum of Rs 50 lakh for developing as many as 50 playgrounds in different schools of the State.

As to the request for constructing a Boxing Academy in the State, the Chief Minister assured that the Government would consider the demand sympathetically.

“ I am happy to learn that the Boxing players from Himachal are providing training/coaching to the children of other States as well and I am informed that the National fame boxing coaches who are present amidst us, are from Himachal and are bringing laurel to the State” he said.

Recalling his school days in Bishop Cotton, the Chief Minister said that it was then he use to do boxing, as in the school it was mandatory for everyone to play all the games.

While congratulating the participants the Chief Minister said that, he hope the budding players would keep the name of the State in limelight while playing at National and later at International level as well.

He also extended facilitations to shooters of the State who performed well in the Korean Asian games, and brought medals for the State. He added that a 10 meter Indoor Shooting range was being set up in Indira Gandhi Indoor Stadium, Shimla.

As many as 120 boxers from all over the State participated in the Championship.

The Chief Minister also distributed prizes to the winners of the tournament.

The Shimla Team was declared as the best team of the tourney followed by Mandi.

Earlier, the Chief Minister was welcomed and honoured by Sh Rajesh Goyal, Chairman of APG University and by Sh Rajesh Bhandari the President of the Himachal Pradesh Boxing Association.

Vijay Thakur, the international boxing referee and Roshan Lal, a coach who had given training to the players at Madhya Pradesh and was honoured with the Vishwamitra Award by the Madhya Pradesh government were also honouredby the Chief Minister besides other officials. Surinder Shandil, Secretary, H.P Boxing Association and other officials were also present on the occasion.

People to get planning permissions in a trouble-free manner: Sudhir Sharma