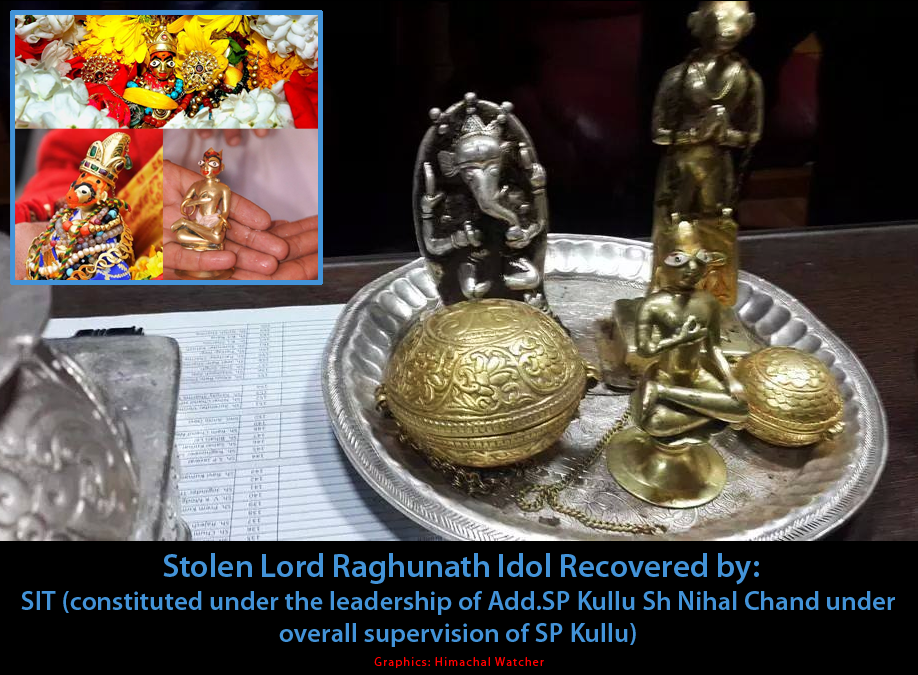 SHIMLA- The stolen idol of Lord Raghunath, a highly revered idol dedicated to Lord Rama, was recovered and reinstalled at Raghunath Temple here on Saturday amid much fervour.

In a major breakthrough, the police on Friday recovered the idols — including that of the chief deity — stolen from the Lord Raghunath temple in Kullu on December 8 last year. The breakthrough came with the arrest of the main accused in the case Nar Prasad (28) in Nepal by a special investigation team. Prasad’s image had been captured by the lone CCTV camera at the temple. After he spilled the beans, the Kullu police swung into action and recovered the idols. The robbers entered the temple from the roof and took away the idols of Lord Raghunath and Hanuman, both made of ‘ashtadhatu’ (a composite of eight metals), a stone statue of Narsingh Shila (covered with gold), one silver Ganesh idol and a pair of Charan Paduka, besides ornaments.

Additional Director General Sanjay Kundu told reporters that the stolen idols were recovered on the basis of clues provided by a suspect, who has been detained in Nepal. The idol has been recovered less than 24 hours before the onset of 40-day Holi festival.

Thousands of devotees gathered at the Lord Raghunath temple in Sultanpur here, about 200 km from the state capital, to apply ‘gulal’ or colours to Lord Raghunath, the chief deity of Kullu Valley.

Kullu Holi is a festival with a difference. A century-old festival begins every year on Basant Panchami and concludes when the festivities end in the rest of the country.

This year, Holi falls on March 6.

“The idol of Lord Raghunath was installed in the temple after purification,” said Maheshwar Singh, the chief gurdian of Raghunath idol.

After the installation ceremony, thousands of devotees pulled the sacred rath (chariot) of Lord Raghunath amid beating of drums and playing of ‘shehnais’. The devotees threw ‘gulaal’ at each other. Locals say starting from Basant Panchami, the idol of Lord Raghunath will be bathed with colours till March 6.

The festival dates back to the 17th century when Raja Jagat Singh, the erstwhile ruler of Kullu, obtained the Lord Raghunath idol from Ayodhya in Uttar Pradesh and built the temple.

Since then, the people are gathering at the temple to apply colours to Lord Raghunath and celebrate Holi for 40 days.

The unique Kullu Dussehra, a century-old festival, is also associated with Lord Raghunath. ~ The Tribune