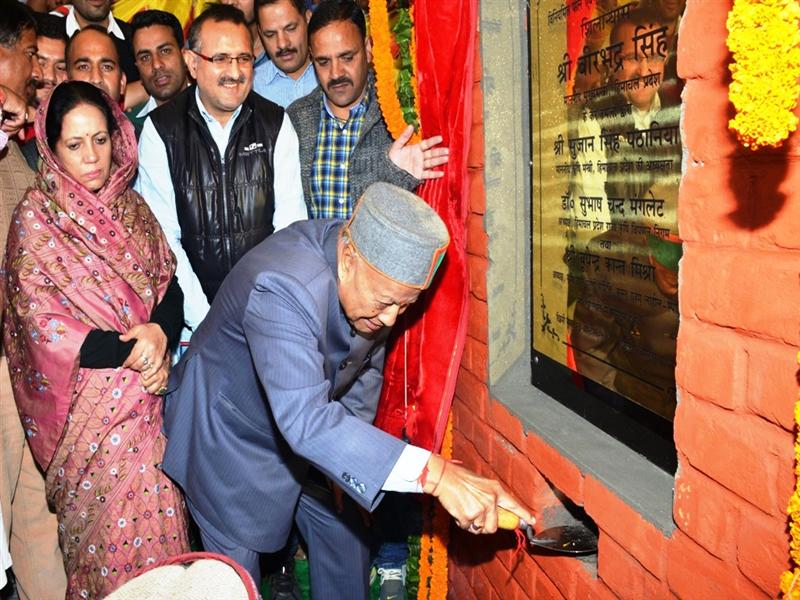 Chief Minister Virbhadra Singh after laying foundation stone of the vegetable market to be constructed at a cost of Rs 7.17 crore at Bandrol in district Kullu said that on completion, it would provide enough space for storing and marketing the produce to the agriculturists and horticulturists of the district besides the producers from Lahaul and Spiti district. He said that in the second phase of construction, a proper concrete wall would be erected along the river and appropriate infrastructure would be made available to the farmers and fruit growers.

He said that agriculture and horticulture has the mainstay of the people of the State and with the construction of the Marketing Yard, the local farmers and horticulturists would get better remunerative prices for their produce. More such Vegetable Marketing Yards would be constructed at Tapri, Jhukhala, Charankhud in Kangra, Rohru and other areas of the State. Besides, to facilitate the farmers and to make them know the daily wholesale rates of the fruits and vegetables, the information was being provided to them on www.agmarket.nic.in and other similar websites.

He said that the per capita income of the State was 82611 with growth rate of 10 percent and Himachal was treading fast towards becoming the most developed State of the Country.

Earlier, the Chief Minster also launched the online set-up of the Agriculture Produce Marketing Committee (Kullu- Lahaul & Spiti) office at Kullu which is the first of its kind as adopted by APMC and similarly all the offices of the Marketing Committee would be computerized in a phased manner.

The Chief Minister also announced jeepable road over River Beas to connect Kais village on the left bank of the river opposite Bandrol.

Shubhash Manglet, Chairman HP State Agriculture Marketing Produce Board and Y.K. Mishra, Chairman, APMC (Kullu and Lahaul-Spiti) thanked the Chief Minster for launching online system in the APMC office, Kullu and also laying the foundation stone of the Vegetable Market which they said will go a long way in serving the interest of the farmers.

lakh. He also laid foundation stone of the Community Health Centre at Tegu Behar to be constructed at cost of Rs 4.63 crore.

The Chief Minister also visited the exhibitions set up by various departments and NGOs highlighting the development of the State as well as the district. He also visited the Ragunath camp the main deity of the Dussehra festival kullu and paid his obeisance to the local God and Goddesses on the occasion.