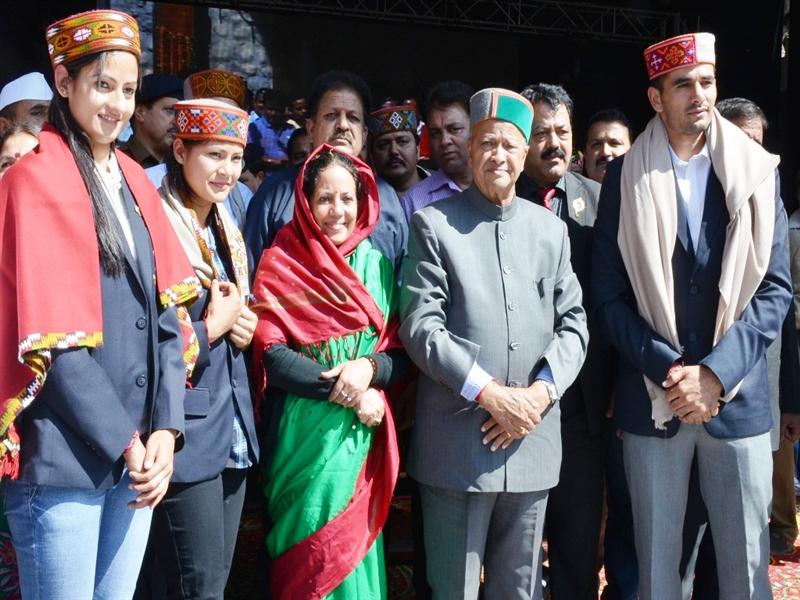 Chief Minister Virbhadra Singh has stressed the need to preserve our rich cultural heritage and taking the State ahead towards development together by conserving rich traditions.

Speaking on the concluding ceremony of the International Kullu Dussehra Festival at Kala Kendra, he said Himachal was known as the land of Gods and was a treasure-house of many prehistoric temples. He said the ‘Dev Culture’of the State was unique and the life of the hill people revolve around the local deities.

He underlined the need to utilize the unlimited wealth which nature had endowed to the State without disturbing the ecology and environment. He remembered the first Chief Minister of the State Dr. YS Parmar for his contributions in making Himachal as 18th State of the Indian Union.

The Chief Minister said that Government was committed to provide best educational facilities in the rural areas many schools had been opened or upgraded in these areas to facilitate the students. He said the Mission of teaching fraternity should not be only to educate the students but also to make them intellectual, cultured well educated. He added if the children of the government Schools failed to give the desired academic results, the concerned teachers would be held responsible for the same.

He also announced for constructing Outer Seraj Bhawan in Kullu for facility of the people of the Outer Seraj area visiting district headquarters.

He said that the National Highway Authority Of India (NHAI) was on job for widening the Kiratpur- Ner Chowk road and then till further to Manali. It would be made four lane later, with two lanes each on the left and two on the right bank of the Beas river till Manali.

He also announced 300 bed facility for regional hospital Kullu and a fire Station at Larji in Banjar assembly Segment.

Earlier, the Chief Minister inaugurated the first of its kind district Library in Kullu with all modern facilities like wi-fi, book café etc. He said that it was an appreciable effort of the district administration and such more libraries were required to be opened in the each sub-division of the State. The library was first of its kind in India and had a unique collection of books suiting to the interests of people of all ages. He also appreciated the children section within the complex.

Virbhadra Singh also appreciated the efforts of the district administration for conducting the week-long festival with great fervor by adding many new attractions to the festival besides the mega dance show which marked its place in Limca Book of records. He said that such type of tradition and practice would be made a routine affair.

Maheshwar Singh, local MLA appreciated the efforts of the Chief Minister in preserving the culture of the State especially his concern for the deities of the Pradesh. He said the entire Kardar Sangh was grateful to the government for creating a revolving fund for the deities to the tune of rupees five crore. He also demanded licenses for chowkidars guarding the ancient temples of the State.

He also appreciated the steps taken by the Government for taking action against those who fleece the people along the road sides in the name of God by carrying palanquins of the local Gods. He thanked the Chief Minister for Trauma Centre at the district Hospital and for Community Health Centre at Tegubehar. He thanked the Deputy Commissioner Kullu for contributing Rs 40 lakh under Local Area Development Authority (LADA) for bridge over Sarvari Nullaha.