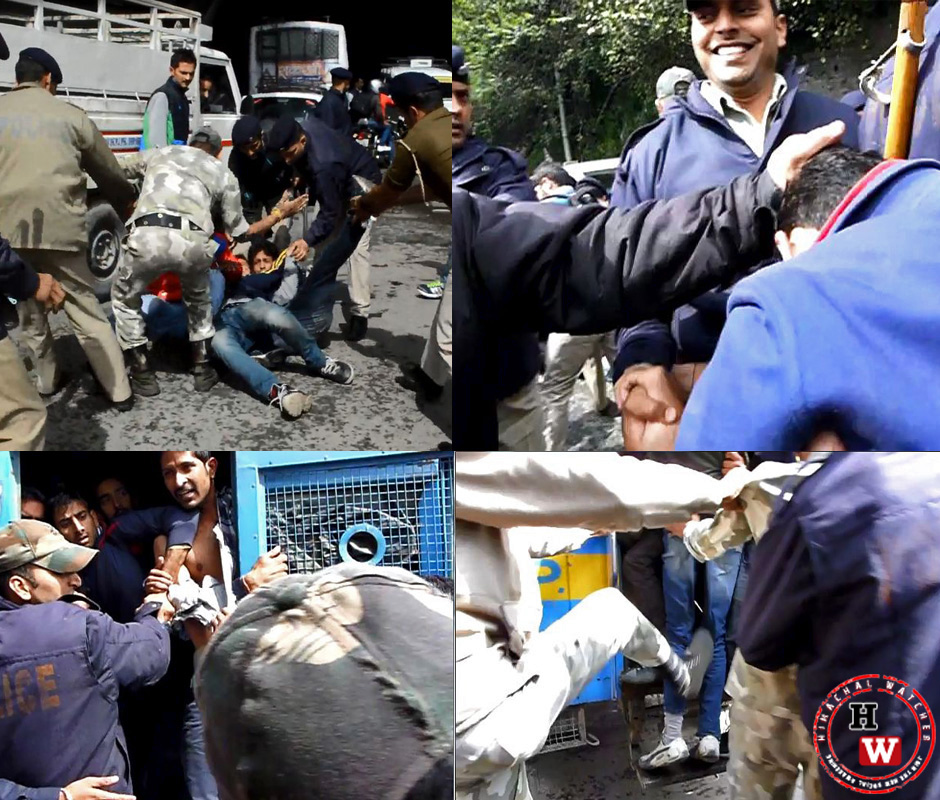 Today, again, they were dealt using force with a lot of vulgarly abusive language, kicks, drags, slaps, and, of course, they were beaten inside the vehicles after they were arrested. The arrested students include 42 boys and 5 girls from HPU and other colleges. After the students were arrested, they were roughed up beyond a common man’s imagination. These four students, Rahul Chauhan, Kewal, Sumit, and Dharmpal are reported to have gone through extreme torturous beating inside the vehicle while on their way to police station. We could not understand why HP Policemen kick them and abuse them when the protesting students do not retaliate at all. All they were trying to do was shouting slogan and sit on the road to hold a Chakkajaam. It’s the duty of the police to remove them so that the public do not suffer, but why they abuse them and personally beat them inside vehicles.

Watch the video carefully and you’ll see even the cloths of students were torn apart even after they were put inside the vehicle. The QRF men were trying to drag the students out of the police vehicles to beat them. Why? Do they enjoy being savages and treat their own people with such a ruthlessness? Even the girl students alleged that they were kicked by male policemen and QRF. Police snatched cellphones from the arrested students and beat them like slaves while they were being moved. QRF behaved like typical Gunda’s in dress, very desperate to abuse and beat the students.

Again, we remind you that students were not retaliating or using any counter force except grabbing each other while they were being removed.

When, a senior police officer was asked about this unnecessary cruel treatment and abuse, he said, “No one abused or beat anyone. Everything happened very peacefully”. Please, do take a look at the footage from the scene. You won’t hear anything other than vulgarity from the mouth of QRF and policemen with kicks and slaps. This time, media too came under assault and some of the media persons were grabbed and threatened while they tried to record their merciless, unfair treatment of protesting students. One of the HW members was also kicked a couple times with an effort to remove him from the spot.

Then the women squad of police tried to threatened onlookers and some students, who just stood in a corner watching the whole thing. One of the male policemen commented on girls, “Tujhe Jyada Garmi Hai?”

Meanwhile, we came across an over-drunk policeman, who was instantly taken away in SP police car at once to shred the scene, but an HW member did record it. Take a look.

So, the policemen has been drinking and beating up students? About 26,00 students from various colleges in Himachal and University have been arrested in past one month. Now, there is no ABVP or SFI. The students are holding joint protests. Isn’t that a clear hint that students are in a great unrest? The university campus is filled with police battalions (Nahan, Pandoh, Junga). It’s been a month that students are suffocating due to unnecessarily imposed CrPC 144. The students were dragged out from library after the Vice Chancellor ordered to curtail the timings from 8 AM – 9 PM to 10 AM – 5 PM despite the fact that the examinations near HPU. What threat the student sitting inside library posed to anyone?

The Shimla Police SP seems to posses no sense of law and order himself, which reflects in the treatment which his policemen gave to the protesting students. The CM is blind and deaf. The opposition is supporting the Govt. and its brutal suppression of student protest.

The police didn’t followed the orderly standard procedures described for using force or other measures to disperse the students -no water cannons, no tear-gas, but the students are directly ‘Lathicharged’. Then, they are beaten behind locked doors of police buses and vehicles. The Govt. has gone lawless to crush the student protests, but the public is enjoying the show from a distance, unaware of the fact that this suppression isn’t only limited to the campus, but symbolizes mockery at democratic principles and rights of the protestors.

All that we could make out on the bases of what we witnessed and researched regarding the whole issue is that Govt. is playing a game that directs HP Police and QRF to create a terror among students, so that they don’t dare to stand up again. The forces have full freedom to be as much as ruthless as they could. We fear, now, we need to approach human rights commission to seek justice for these unfortunate students. However, we are losing faith in all Govt. machinery, especially in the police.

Where would you go if the very institution that is meant to protect your rights and bring justice to you turns against you? The HPU is suffering from side-effects of ugly political vendettas and corruption. To the students, we would appeal to stand united and take a stand against the atrocities of the Govt. The unity is the only way to deal with such an ugly and highly politicized suppression of the Govt. No Diwali celebraion this year for HPU students

Suffocated HPU students gather to protest, Over 70 arrested for violation of 144