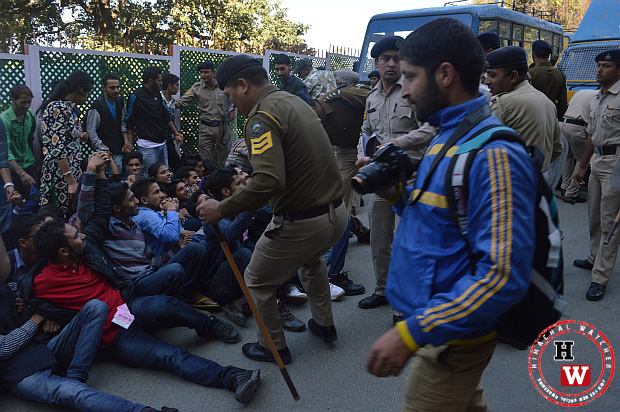 SHIMLA-After recent, brutal, insensitive assault by police, HPU students again came out to bear canes, kicks, and abuse of HP Police, over 70 of which were arrested and booked under sectons 147,151,188 and 341 for violation of CrPC 144. As per the report, all the students were later released on bail.

They did not retaliate, they did not carry weapons, but they just grabbed each other tightly when they were being dragged into police vehicles. We saw no one abusing the police, but we saw police abusing and behaving like savages, again. We did not see scared students, but some rebels smiling at the Govt.’s favorite tool of suppression; our own police.

Here is footage from HPU Campus: Police tried to act very decent and dutiful, not because they were asked to do so, but just because today all media cams were present. Still, these angry young-men in Khaki tried their hand on students, who weren’t retaliating. The lady police personals showed their ‘Mohalla- Quarrel’ like attitude, but resisted the temptation due to the presence of media. A Jawan of QRF was heard and captured challenging and insisting others to drag one of the students out so that he could trash him.

We saw policemen desperate to show how typical and similar they are to the police in states like UP, Delhi, Bihar etc. Today, students gathered for an intentional violation of unnecessarily impose 144 at HPU campus for a prolonged time. They gathered to protest against the reduced timing of Library when the exams are nearing. They violated it after the campus turned into a suffocating police cantonment. The police would say, “We just follow the orders”. However, we have one question for the police and the Quick Reaction Force; what law empowered you to kick and abuse protestors in vulgar language? What law encourages you to go beyond your assigned and aptly defined limits and try to be the decisive institution when you are just authorized to detain the protestors, who are, in no way, trying to assault or attack them? One of HW members asked a policemen (without disclosing association to HW or media)whether the orders of a lathicharge allow them to use kicks, drag girls from hair and insult them using vulgar language. He replied, “ Haan sab allowed hai, laat, hath job hi chale chalalo, app IPC 144 padh lena”. The Govt., headed by a blind and deaf CM along with equally self-centered opposition, watches while the only Govt. higher educational institute burns in the flames of protest, while the students are subjected to unlawful assault and abuse by the hands of police. Isn’t it an apt evidence to convince us that the politicians don’t care about the unrest of their sympathizers? They’ll play the same old game with the public which once British exploited to rule India; divide and rule.

However, all that matters now is the strength that lies in unity. We would appeal the public to dive deeper into the affairs going on at HPU campus, and try to figure out who is actually a nuisance, who spoiled the academic environment, and who drove HPU into financial crisis. It would be a very easy act to murmur critical words against these protesting students, but for these students, it takes heart to gather again to protest when they are aware of the consequences.

Once again, take a look at some of the massive fees hiked, against which the student are protesting from past many months: