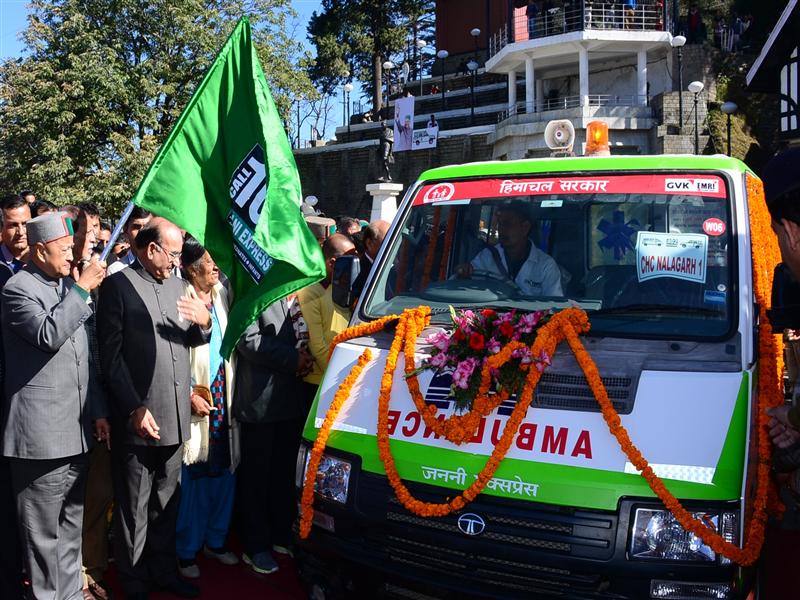 In the first phase a total number of 45 Ambulances were flagged off to provide free transport/drop back facility to the pregnant women, women after delivery and sick children up to the age of one year in the State, which includes the remotest Dodra-Kwar and other far-flung areas.

While addressing the gathering, the Chief Minister said that under this Scheme 125 ambulances would be stationed at major delivery health centres including the regional and district hospitals. As of today, the infant mortality rate of the State was 36 as compared to the National average of 42 and similarly the fertility rate in the State is 1.7 as compared to 2.4 at National level.

This is another milestone achieved in the Health Sector after the successful launching of 108 Ambulances and would play a pivotal role in strengthening the health infrastructure, he said, adding that the ambulance would prove beneficial to drop home free the new born child and mother from hospitals.

He said that this free service would promote institutional deliveries which in turn will be go a long way in further reducing the Maternal and Infant Mortality rate in the State.

The Chief Minister said that health indicators of the State was far better from the National health indicators as per the latest survey. He said that under National Rural Health Mission the State Government was successful in getting the finances of Rs. 261 crore from the Centre and he hoped that the Union Government would provide assistance to further strengthen the Health Sector as the Union Minister of Health J. P. Nadda represents the State.

“ I am thankful to the previous Union Government and especially the then Health Minister Ghulam Nabi Azad for sanctioning three Medical Colleges in a single fiscal for the State with adequate budgetary provision of Rs. 190 crore for each College”, said he. There won’t be any constraints of finances for the priority sectors like Health and Education, he added.

Speaking on the occasion Health Minister Kaul Singh Thakur said that a sum of Rs. 6.15 crore was being spent under 102 Janani Sishu Suraksha Karyakram in the State. He said that this free 102 Ambulance drop back services would reduce the pressure on 108 Ambulance services which were also performing the same services. He said that 100 bedded Mother Child Hospitals each in Kamla Nehru Hospital and in RPMGC Tanda was being constructed by spending Rs. 20 crore each. He thanked the Chief Minister for strengthening the Health infrastructure and said that as many as 71 Specialist Doctors and 457 Doctors has been appointed besides about 700 Para Medical staff in the State.

He said that the services would be available through a toll free No.102.

Only one out of 16 private universities in Himachal NAAC-approved