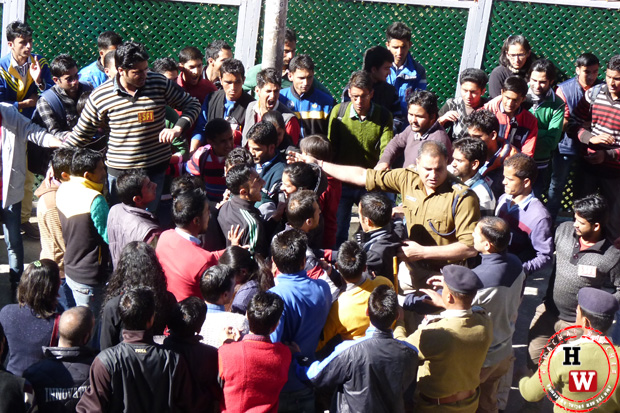 After Govt. granted another 3-year term to ADN Bajpai as the HPU VC, students gathered at Campus to mark the the day as ‘Black Day’ and to break CrPC Sec 144 as a protest against this decision. Seven students were arrested and FIRs were registered against them for shouting anti-VC slogans.

SHIMLA- The 3-year tenure of ADN Bajpai as HPU Vice Chancellor has been the most controversial as compared to others. For the last six months or so, many illogical and unreasonable fee hikes were imposed on HPU students. There has been so much agitation, protests, lathicharges, arrests, rustications at HPU campus, and protesting students were subjected to QRF and HP Police brutality. ADN Bajpai has put the University into financial crisis owing to his incompetency in resource mobilization, but he hasn’t suffered from its consequences, but the employees and students have.

Majority of students demanded for his removal as HPU VC. Everyone criticized the massive fee-hikes, but he secured his second term as the VC of HPU very easily. Now, already deteriorating HPU is again in the hands of Mr. Bajpai till May 24, 2017 (that unless he gets another extension).

Newspapers and the Govt. appreciated him for his bluntness in imposing more fees, putting a ban on direct elections to SCA, and his suppression of the protest. The best part is where he openly lied that he was attacked by students in the campus, won sympathy of the public and encouraged misuse of police. Today, a group of students broke Sec 144 (prevalent in the campus for about two month now)  by gathering in front of the Library to address the students. The main leaders are already behind bars for more than two months. They weren’t granted bail by court. Murderers and rapist find it easier to get a bail than these students found for protesting against anti-student policies of HPU administration.

This sudden student gathering came as a surprise to the police deployed at campus under the command of DSP Shiv Chaudhary . The students, protesting as peacefully as they have in the past, made sure they gave arrest themselves to protest against the re-appointment of Mr. Bajpai as the VC.

DSP Shiv Chaudhary grabbed the award for Mr. ‘centre of attraction’ today. He was seen trying hard to manhandle the student who was addressing the gathering. DSP’s body language says all about is aggression. The DSP was reported to be abusive, using vulgar words  irrespective of the presence of female students around. The past of Mr. Chaudhary is already tainted, and that makes him a perfect candidate to serve the VC. He brought RUSA without considering infrastructural and administrative requirements for it, and it backfired. RUSA delayed the results, overburden existing staff, and caused a decrease in enrollments at higher educational institutes. When, the staff started exerting pressure on him as the payments of salaries, pensions etc. were stuck, the Vice Chancellor came out with an idea to create funds for university – the fees were hiked by hundreds and thousands percents. That means triple to 20 times of existing fees.

If you remember, a CAG reports had appeared in Newspapers confirming that Mr. Bajpai had transferred Rs 13.65 crore from students’ fund to corpus fund. According to The Tribune:

“The Comptroller and Auditor General (CAG) report has revealed that Himachal Pradesh University (HPU) has irregularly transferred Rs 13.65 crore from students’ fund to corpus fund and its main fund and not maintained its annual accounts. The fund-starved university, under Vice-Chancellor ADN Bajpai, failed to utilise the Rs 2.50 crore grant from 2009-11 for infrastructure. The university granted Rs 2.04 crore as a contingent grant to its officials during 2010-13, but they were yet to be adjusted, the CAG report revealed.”

Then the elected SCA (Student Central Association) tried to expose many irregularities in the recruitment of non-teaching staff. A great load of political interferences were reported during his tenure. The SCA also forced HPU administration to take back unjustified fees on online admission forms.

The girl hostels remain overcrowded as usual. There isn’t any clue of funds granted for Wi-Fi facility. The campus remained devoid of even the most basic facilities. The toilets don’t have taps and doors.

Whole campus is surrounded in garbage. All waste is pushed down the hill into the forest from right infront of the VC office. There wasn’t campus beautification but just that of his office and residence.

When, the SCA protest grew larger, and became a headache, he banned the direct student elections. His excuse was to prevent violence and root out student politics from HPU. Still, the students did not give up and their protest kept gaining momentum. At last, when students took to protest in front of HP Secretariat in Shimla and organized a ‘Gheraw’ of VC, HP Police was used to trash students. Not ones, but on many occasion. The photographs and videos of police menace at HPU confirm it. It was made sure no further protest could be organized at HPU Campus, and therefore, CrPc 144 was imposed, which still continues after two months. There had been no violent incident of any such activity that justifies 144 at campus. HW had visited Shimla SP, DW Negi and tried to get explanation for such a pathetic behavior on the part of his men. Instead of being gentlemen, he rather behaved like a Nawab of the city. We would bring those clips to you some other time.

The trap became even tighter as examinations are nearing HPU. The students would find it hard to gather for protests. For now, Mr. Bajapi has the ball. It’s a blow for students who tolerated all the suppressive actions of authorities in a hope that the Govt. will hear their distressed voices.

Well, we don’t think that the Govt. or Mr. Bajpai give a damn to student distress or financial burden on the students. It’s not unexpected from Mr. Bajpai, but we wonder what happened to our CM, Virbhadra Singh?