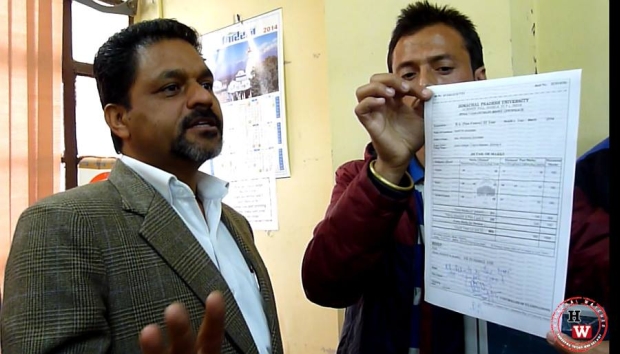 SHIMLA-After the blunder of re-appointing ADN Bajpai as the VC of Himachal Pradesh University, now another scandalous deed surfaced at campus yesterday. A student was issued a fake marksheet of B.A. III when he didn’t even appear in the exams. The student appeared in I and II years examination, but did not show up for the final year exams, still, he passed with flying 70% marks. Then, he applied for the post of clerk at HPU. That’s where it came to the notice of the officials when they sent his detailed mark-sheet to the examination branch for verification, where no record of it was found.

Now, this student is the son of Assistant Registrar of UG classes, B.K. Sharma. He was entered with a Roll No. 1139496 and enrolled at Kotshera College in Shimla. The marksheet was issued from HPU Computer branch on Nov 12. However, there is no record of this marksheet in the Examination Branch. The students launched a sharp attack on HPU administration and obtained a copy of marksheet from the computer branch in the presence of Comptroller of Examination and other subordinate employees. The students demanded COE to show the records in Examination branch.

There isn’t any need to mention that the allegations involve re-appointed Vice Chancellor, ADN Bajpai, who allowed it to please his political patrons. Not only, the VC but the registrar and COE were also alleged by the students.
The case was brought to the notice of the VC, ADN Bajpai and the COE, about a week ago, but they did not take any action. Rather, the efforts to cover up the issue were initiated. The AR was transferred from the branch. The VC is re-shuffling the staff instead of reporting it to the police or vigilance itself? Why Mr. Vice Chancellor did not take any action?

However, as usual, a clerk or some other subordinate employees will be given to the public as the culprits, putting all blame on him/her. No one is going to touch the VC, the Registrar and COE.

That’s the way it works. It’s just one case. The public have no idea how many such frauds go unnoticed in every session. There are wealthy men who are always ready to throw 10-20 lacs for a degree. It’s a good side business for HPU administration. Further, newspapers have published that the Vice Chancellor constituted a three-member committee to investigate it. It’s really absurd to hear that the one who is in the list of alleged culprits has formed a committee.

Did anybody mention the allegation on the VC and COE? The COE is captured in the video saying to police, “It’s ok. Everything is fine here”. How come he was so sure about it? His response should have been more concerned. He should have told students that the case will be investigated, but instead, he assured all that there is nothing wrong with the mark-sheet. This issue was raised about seven days ago after which, like always, a committee was formed for the investigation of this fake marksheet scam. There have been hundreds of such instances when students exposed similar irregularities in administrative process, but they died somewhere in the process of investigation. It’s been more than a week now, and according to the students, right after the issue was raised, the high rank officials started tempering with documents in the Examination Branch and Evaluation Branch, which otherwise do not record any details regarding this marksheet.

The students demanded immediate judicial inquiry of the case, and not an investigation through a HPU body, which involves the very official who are responsible for such a corrupt act. The students had approached the Examination Branch yesterday in order to confirm the truth. They found no record against the mentioned Roll. No. However, today, no one was allowed to enter the branch and attempts were being made to temper with the records under the cover of Section 144 imposed at HPU campus. The students also lodged a complaint with vigilance with request to investigate it and help punishing the culprits.
That was about what students exposed. Now, we would like to through some light on the course of action today. We have some video clips as well. Please, do take a little pain to watch them.

During the whole process, the COE didn’t speak a word on allegations against him. He appeared to escape the demand of students to verify the record in Examination Branch. However, the furious students weighed way too heavy on COE and even police was helpless. At the end of the day, the students were denied any details in the examination branch. No media people were allowed inside the branch, so no footage available from inside. Why no media was allowed if everything was fine. The committee, which was formed to investigate the case should have taken no time to verify the marksheet if it was real. It’s simple. There will be a record of it in the examination branch. All they need to is to verify it. So, what’s taking them so long? Why the COE didn’t agree to verify it on the spot?

Do not take it lightly. That’s the trouble with people. They are told that HPU students are creating nuisance under the influence of external, political agents. But, what we witnessed shows us that it is otherwise – the administration is under influence, and that the students have always been shouting about the prevailing corruption at HPU. They received strikes of police canes and the kicks of QRF, their abuse and prison. That’s right. Students were rusticated and put behind bars, denied any bail. Their Dushera and Diwali were spent in Kaitho Jail. All they did was to raise voice against this corruption.

Take a moment to contemplate as to how these students dare to stand up again and again after all that police brutality and legal cases. We guess, now police has beaten them so much, registered cases against them in abundance that these students are no more afraid of it anymore. But the more unfortunate and ironic aspect of it is that the public still consider them a nuisance when they need our support.