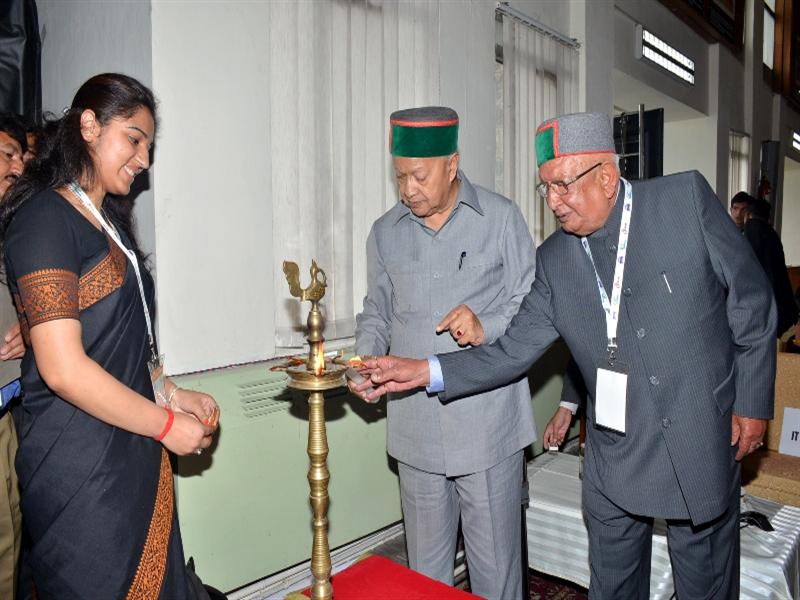 SHIML- The Digital India program envisages bringing all basic services directly to the public through the use of Information Technology in this fast changing world said Chief Minister, Virbhadra Singh after launching 7 g2c (e-district service from government to citizens) under e-district portal, Aadhar Permanent enrolment center and Digital lockers to members of Vidhan Sabha under the Digital India Programme here today.

The chief Minister said that today we would not have celebrated this week if the last UPA government had not come up with an ambitious National Fibre Optical Network (NOFN) project that provided high speed internet connectivity upto the gram panchayat level.

He said that Himachal Pradesh was one of the leading states in implementing Information Technology in Government sector. The State Government has been endeavouring to bring transparency and accountability through e- Governance in the delivery of services to the people. There has been a constant and sincere effort to introduce same in the entire state since long. As technology keeps changing rapidly with every passing day, I believe that one has to keep pace with it to keep oneself well informed, said the Chief Minister.

“The internet has become somewhat like household commodity used by every family and I would like to see the day, when it will be used by everyone, even in the remote corners of the State”, he said.

Chief Minister said that around 1800 offices were connected through HIMSWAN Network. About 2000 Common Service Centers were providing government services to the citizens in almost every corner of the State. It gives me great pleasure to inform that citizens above 18 years of age in the State were having ‘Aadhaar’ Number”, which counts to 96 percent as of now, he said.

I am happy to say that there is a bank account in every home and we have been declared as banking saturated State, he said, adding that these are big achievements for a hilly State like Himachal Pradesh having difficult topographic conditions.

Speaking on the occasion Speaker Vidhan Sabha, B.B.L. Butail said that HP Legislative has a great role to play to ensure participation of people in development process. He said that Digital India week was being celebrated to provide speedy service to the people of the State besides achieving the objective of Digital India.

He said that HP State legislative was the first in the country to adopt e-Vidhan and launch the same on 4th August 2014 and the first legislative assembly to be paperless saving an expenditure of Rs 15 crore per annum.” Our objective is to make all MLAs well equipped with various tools of IT and all the MLA’s were provided internet dongles for surfing”, he said. The teams of other State, Karnataka, Assam, Meghalaya, Uttarakhand, Gujarat and other many States were keen to adopt the system and were in continuous touch with us, remarked the Speaker. He said all correspondence and reply by the departments would soon be on-line saving paper and other related material. Training camps would be organised in respective constituencies for e-Vidhan training camps at Sub-division level.

Director IT, Ms. Priyanka Basu welcomed and honoured the Chief minister and Speaker Vidhan Sabha respectively and detailed about the services under e-district mission mode project. She said that 51 services of eleven departments were being brought under Digital Programme. Various services as Birth and death registration, issuance of BPL Certificate, enrolment and registration under MNREGA ,etc. would be digitized.

Special Secretary, IT, Ms. Nandita Gupta proposed vote of thanks.

A detailed presentation of the services to be digitized was also given by officers of IT department of the State. Director IT Vidhan Sabha, Dharmesh K. Sharma also gave presentation on e-Constituency management which will help the members of legislative assembly to know more about the ongoing development works and its status in their respective constituencies on their mobile apps. This will help in better management and monitoring of works, he added.